‘Expand the Court’: Democrats, the Left Lose Their Minds Over Barrett’s Confirmation

‘Expand the Court’: Democrats, the Left Lose Their Minds Over Barrett’s Confirmation 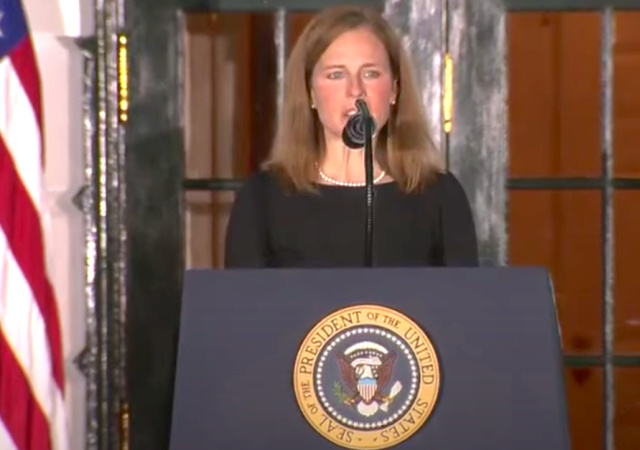 Remember, the left swore they would burn it all to the ground if President Donald Trump even thought about replacing Justice Ruth Bader Ginsburg.

Please be careful out there tonight, as "the entire fucking thing" is apparently going to be burned down. https://t.co/Ydbv0s4rek

But now we have Justice Amy Coney Barrett!

Remember when they accused Trump of court-packing? Well, now they want to expand the court. Someone inform these poor ignorant souls that expanding the court is court-packing.

Abolish the filibuster. Expand the court. Abolish the Electoral College.

We are going to take back the White House & Senate next week with a resounding mandate from the people to fight back against Trump’s illegitimately stacked judiciary. We must expand the Court if we’re serious about the transformational change the people are crying out for.

How about some more thoughts from those who want to twist words and meanings to fit their agenda because Orange Man Bad?

How jarring to hear Amy Coney Barrett discuss her "rigorous confirmation process," given the lightning-fast one month from nomination to confirmation that Senate Republicans pushed through in order to make sure she was confirmed just days before the election.

Look, you may not agree with Amy Coney Barrett’s extreme views, but at least she’s also unqualified

Every single second that Justice Barrett stands next to Donald Trump beaming as part of a Trump political spectacle is an additional argument that she should absolutely recuse herself from any Supreme Court case involving the presidential campaign.

Today Republicans denied the will of the American people by confirming a Supreme Court justice through an illegitimate process—all in their effort to gut the Affordable Care Act and strip health care from millions with pre-existing conditions.

We won’t forget this.

I'm literally crying about the Amy Coney Barrett confirmation while on a Zoom training call for a Biden phonebank marathon. 😭 This is what our democracy has dwindled down to.

My Senate Republican colleagues have just done great harm to the American people by confirming Judge Barrett to the United States Supreme Court. There is no question about that.

President Trump and Senate Republicans have committed an act of supreme desperation: jamming through a Supreme Court nominee just eight days before Election Day as part of their years-long campaign to destroy Americans’ health care.

I just want to remind you that Susan Sarandon convinced young leftists to vote against Hillary.

This is how we got the dead eyed woman, Amy Coney Barrett, Kavanaugh, and Gorsuch.

Is the confirmation of Amy Coney Barrett a setback? Yes. Is it determinative of the future of millions of people? Frankly, no. I think this reminds us that apathy is not an option, that corruption requires resistance, that our rights must be fought for and never assumed.

Amy Coney Barrett will do all she can to keep Trump in power–if given the chance. Let's not give her or the other GOPers on the court that chance. VOTE, VOTE, VOTE!!
If we win BIG they can NOT Steal the Election!!