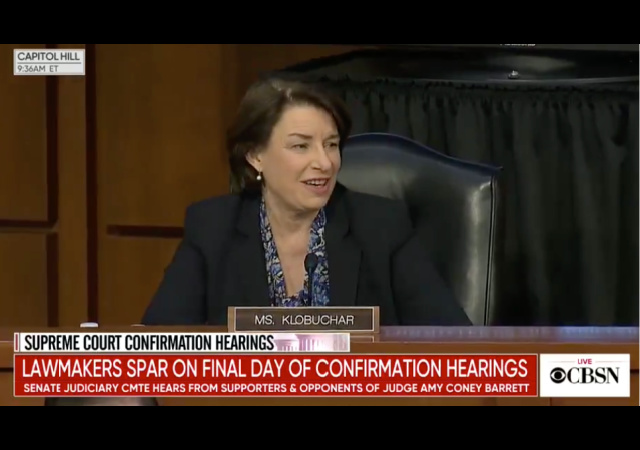 The fourth and final day of Judge Amy Coney Barrett’s hearing began with fights between Democrats and Republicans because Chairman Lindsey Graham scheduled the committee vote for October 22.

I just heard Sen. Amy Klobuchar yell at the Republicans for “plopping” Barrett’s nomination on them in the middle of an election.

My dear, Justice Ruth Bader Ginsburg passed away. This is what happens when there is a SCOTUS vacancy. Be mad at RBG.

Sen. Dick Durbin objects on grounds that a quorum is not present because he's the only member of the minority party present. pic.twitter.com/wwFwsp8FhM

Sen. Richard J. Durbin of Illinois was the only Democrat who showed up to a committee business meeting Thursday morning to consider the nomination, which under the letter of committee rules meant there were not two members of the minority party to form a quorum to conduct business.

Chairman Lindsey Graham responded with a motion to hold the vote at 1 p.m. on Oct. 22, which Republicans backed. And the South Carolina Republican suggested Democrats would be able to do the same if Republicans tried to stop committee work.

“We’ve had this problem in the past, we’re dealing with it the way we are today,” Graham said. “If we create this problem for you in the future, you’re going to do what I’m going to do, which is move forward on the business of the committee.”

Sen. Dick Durbin says confirmation process has become "almost useless" and that Barrett refused answers about rights spelled out in the Constitution: "I would be afraid to ask her about the presence of gravity on Earth. She may decline to answer because it may come up in a case" pic.twitter.com/p0quPXu4WA

"It just defies logic": Sen. Dick Durbin says Amy Coney Barrett "hides behind originalism — she's not the only one, many do — but won't even go to the original words of the Constitution when it comes to the transition of power" https://t.co/COWr56xUUB pic.twitter.com/NRaW66Vpxz

Amy Klobuchar: "I don't come out of this with cries of defeat. You know why? Because it's motivating more people to vote. You chose to do it in the middle of an election, so let's all go out there and vote. That is what happens. Because this should not be Donald Trump's judge" pic.twitter.com/xGDzZrwUNO

"It's going to create a lot of bad will that doesn't need to be created," Feinstein warns

"That set in motion a lot of things that have taken the Senate in the wrong direction," he says

"Anybody who has doubts about climate change is weird in your world…I personally reject the idea she wasn't forthcoming," Graham, who was very climate friendly before Trump, tells Durbin

"Y'all have a good chance of winning the White House," Graham says

"Thank you for acknowledging that," Klobuchar responds

If Durbin was honest, he could have spoken about how he regretted the process that the Democrats used against Bork. It was with memory of his nomination process that supreme court justice nominee’s will not answer specific questions about specific cases or situations.

So another words Durban just needs to suck it up and quit complaining that it’s the Republicans problem but it is rather the Democrats own creation.

Dims have reaped what they’ve sown. Barrett is smart enough to know not to give you commie loons a single sentence you can contort against her.

Democrats, who are nothing more than glorified ankle biters, will try to raise as much dust as possible to block Barrett, but they will fail. I would be so embarrassed to admit I was a Democrat. No standards of equity or moral underpinnings.

…’Noooo!’ cried Senator Richard Blumenthal. ‘It burns us! Take it away!’ He dove under his desk to hide from its light.

…Senator Mazie Hirono made a loud hissing noise and growled at the cross. Her head began to turn around and around like a demonic owl. Then, she vomited pea soup.”

That was bat soup, noob.

Also my bad; not giving credit where credit is due: