A range of emotions came over me today, most of which weren’t about Trump individually. 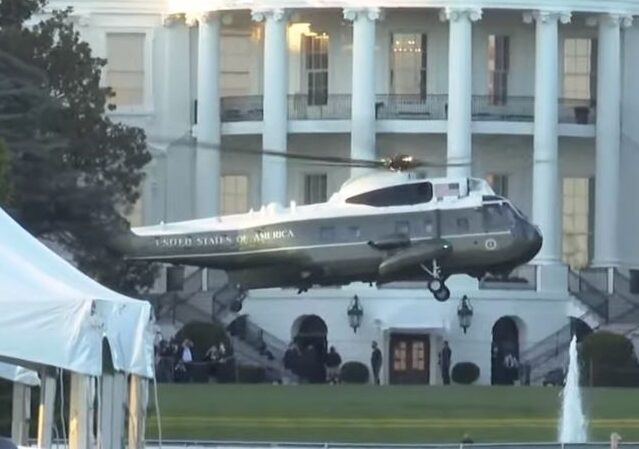 I saw President Donald Trump’s October 2, 2020, 12:54 a.m. tweet announcing he and Melania had tested positive for coronavirus soon after it was issued. I posted from my phone with one eye open at 1:09 a.m.

It was strange because I wasn’t watching Twitter. Something startled me out of sleep, I looked at the phone, and there it was.

A range of emotions came over me, most of which weren’t about Trump individually.

I saw someone tweet about E-6Bs in the air over the east and west coasts, capable of communicating with our nuclear ballistic missile submarines around the globe even if D.C. were destroyed in a preemptive nuclear strike. I hadn’t heard of those before. It turns out they were not launched in response to Trump’s diagnosis, but they are impressive examples not just of the military power this nation holds, but of the fact that there are people who stand guard over us while we sleep, mostly unseen, unknown, and unthanked. I thank them for their service.

Throughout the day, those positive emotions of country flowed despite the despicable celebrations and hopes for Trump’s death by so many ‘blue check marks’ and others whose hatred for Trump has destroyed their own humanity.

The death of a president in office is a national tragedy. I would have said the same thing if Obama had died in office, despite my years of opposition to him.

It took me until the evening to source that deeply embedded emotion.

John F. Kennedy was assassinated when I was four years old. It was the first emotion I remember — Being that young I’m not sure if I remember the event, or remember what my mother told me about the emotion I felt. She wrote out and mailed a two-or-three sentence note I ‘dictated’ to the Kennedy children telling them I felt sorry that they lost their dad. She made a copy of the note and showed it to me repeatedly over the decades. I have the note somewhere, but it’s one of those things I find when I’m not looking for it, and can’t find when I am looking for it.

The news unearthed that emotion, much as did other events such as the attempted assassination of Ronald Reagan.

Statistically, Trump has a 95% or better likelihood of survival and recovery. Yet the emotions are there.

It’s not about Trump the individual, it’s about the country. I wish more people understood that, but I can’t say I’m surprised in this political culture.

Feelings. Nothing more than feelings.

For millennia, the human species has been working to mitigate feelings with reason. Critical thinking was pushed since the ancient Greeks, in the West. Science is based upon using intellect to determine when to give into emotion and to what extent. But, back in the late 1960s, that all changed. Reason and intellect were shoved onto the back burner of human endeavor. The new watch words were ‘do what you feel’. We, as a society no longer view events intellectually. We view them viewed through thee prism of how they make us feel, or how we want or expect them to make us feel, emotionally.

Take the diagnosis, of a person whom we love or admire, with a potentially deadly disease. We do not want them to die, but we also do not wish them to suffer needlessly. If the disease is potentially fatal, we may feel that putting that person out of his or her misery is the best course of action. If we at on this feeling, the person is dead without us ever knowing if he would have suffered needlessly. However, if we apply reason to the situation, we may come to a far different conclusion. How deadly is the disease? What is the likelihood of long term problems which will seriously degrade quality of life? How much time do we have to gather data and make an informed decision? And, are we really more concerned about ourselves than about the person with the disease?

People felt that Ofc. Chauvin caused the death of George Floyd by cutting off oxygen to Floyd’s brain. Hordes of people made serious eciion based upon that assumption, which was based upon how people “felt” upon seeing the video. However, once the incident was investigated, scientifically, evidence showed, rather conclusively, that Chauvin did not cause Floyd’s death, but rather a chemical cocktail, ingested by Floyd, was thee cause of his death. Yet, people re dead and billions of dollars in property has been destroyed over false assumption generated by “feelings”.

At this point, there appears to be little cause for concern over the the health of the President. The situation may change for the worse, for thee better or stay the same. Have your feeling stand down and stand by.

To Legacy Republican: Super post and link; thank you. I’m a great fan of Fulton Sheen. You probably know of his “Communism and The Conscience of the West,” “God and Intelligence,” and his “Philosophy of Science.” Also there is “The Quotable Fulton Sheen.” (I’m such a fan of Sheen that I’m a co-editor of the last book listed — available for a song at Abe Books online.) Once again a thoughtful post. Cheers

Professor, I was sitting in a Geometry class taught by T Lester Brown, when we were told of Kennedy’s assassination. Some of my female classmates started weeping and I felt the urge as well. I know now that my world and the US had lost its innocence.

Fast forward to September 11, 2001, and the crushing blow that our precious country took that day. I remember being filled with emotion with the loss of life that fateful day. My sense of lost innocence was confirmed that day.

Fast forward again to the events we are experiencing as a nation today, there are open hate and bigotry now within our great land. Its as though the fabric of our great Nation is being torn in two. I am sad.

Thank you for your thoughts here. I am encouraged. I am praying for President Trump and his family and those in his administration dealing with the WuFlu.

I am prepared for November 3 and the days after…