Cuomo ‘Not That Confident’ in FDA, Thinks Americans are ‘Very Skeptical’ About COVID-19 Vaccine

Cuomo ‘Not That Confident’ in FDA, Thinks Americans are ‘Very Skeptical’ About COVID-19 Vaccine 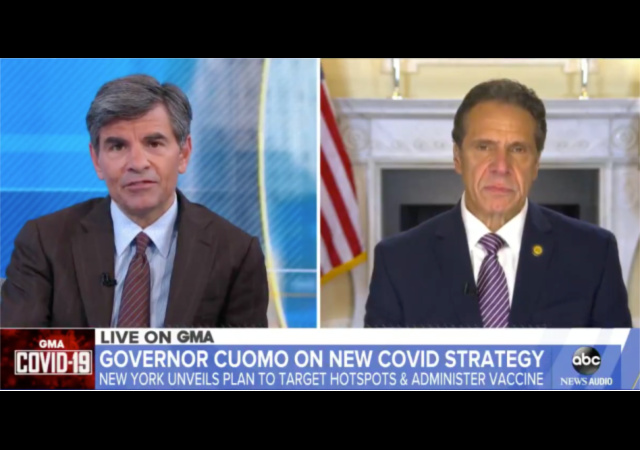 Do you need more proof that Trump Derangement Syndrome has broken the left?

Thanks for speaking for me, Cuomo, from your mansion in your warped little world.

But no, I am not skeptical of a vaccine approved under Trump’s administration. No one around me has doubts either. In fact, people around me cannot wait to have a vaccine!

How about the other vaccines approved under Trump’s FDA? Cuomo said:

“I’m not that confident, but my opinion doesn’t matter. I don’t believe the American people are that confident,” Cuomo said Monday on ABC’s “Good Morning America.” “I think it’s going to be a very skeptical American public about taking the vaccine, and they should be.”

The governor said both the FDA and CDC “don’t have any credibility” under the Trump administration and that as a result others will need to vouch for a vaccine for people to have trust in it.

“I believe all across the country you’re going to need someone other than this FDA and this CDC saying it’s safe,” he said.

"I think it's going to be a very skeptical American public about taking the vaccine, and they should be."

It’s almost like they don’t want us to have a vaccine. After all, that means they have to give up more control over us lowly human beings. Cannot have that, can we?!

Biden said he doesn’t trust Trump. He will only take a COVID-19 vaccine “if the body of scientists” confirms it is ready.

Harris declared during the vice presidential debate that she will not take the COVID-19 vaccine if Trump tells her to have it. It has to come from public health professionals.

First of all, if you get medicine or a vaccine because a president or any politician tells you to get one, I cannot take you seriously.

How about these politicians encourage people to talk to their own doctor about any vaccine or medicine? You know, a doctor that actually knows you and your medical history.

How about these politicians say that they will get a vaccine based on their doctor’s advice?

Who takes advice on medicine from politicians?! Even if the said politician is a doctor why would you? I don’t know about you, but I only trust my doctors (I have so many due to numerous health problems.)

Cuomo received praise at the beginning of the pandemic, including from me, because he appeared to be calm and collected without the fear-mongering.

It did not last long mainly because he forced nursing homes to admit COVID-19 patients. The death toll and infection rates skyrocketed among those in nursing homes. Cuomo did not reverse his decision until he could not deny the facts. However, he refuses to take the blame.

The lack of self-awareness continues to show because he penned a book to boast about the excellent way he handled the COVID-19 pandemic in his state. Oh, I forgot to mention that scientists believe New York City is Ground Zero for the pandemic.

New Yorkers have not forgotten Cuomo’s disregard for the safety and health of those most vulnerable to COVID-19:

A silver casket was wheeled to the front of a Brooklyn nursing home Sunday — and 6,500 copies of the cover of Gov. Andrew Cuomo’s new book were dumped into it in protest of his COVID-19 policies.

The number of covers was equal to the roughly 6,500 people who have been reported killed by the coronavirus in nursing homes in the state — although the ralliers said they believe the figure is much higher.

“My mother-in-law got COVID in an elder-care facility but died in a hospital, [so] her number does not count’’ in New York’s nursing-home tally, said Janice Dean, a meteorologist for TV’s “Fox & Friends’’ who was among the roughly 50 protesters outside the Cobble Hill Health Center.

Cuomo finally admitted his administration could have handled it better, but basically said the elderly and vulnerable would get sick no matter what:

“But can anyone say that a virus that targets the weak and the seniors, [that] we can keep them safe? Nobody can say that,’’ he said.

Americans are more confident with any Corona virus vaccine than they are in the honesty or ability to govern of Andrew Cuonmo (brother of Fredo).

Speaks the man from Planned Parent.

Which one? Vaccine 1.0, which primes the immune system. Or vaccine 2.0, cloned antibodies? Perhaps the full Planned Pathogen protocol, which includes a cellular border guard (e.g. HCQ), a prophylactic (Zn) in the cell to progress pathogen viability, and an anti-inflammatory, antibiotic (e.g. Az) to clear the sidewalks, so to speak.