“You can sit up, remove the flag, or reposition your camera within the next 15 seconds or I’m kicking you out of class” 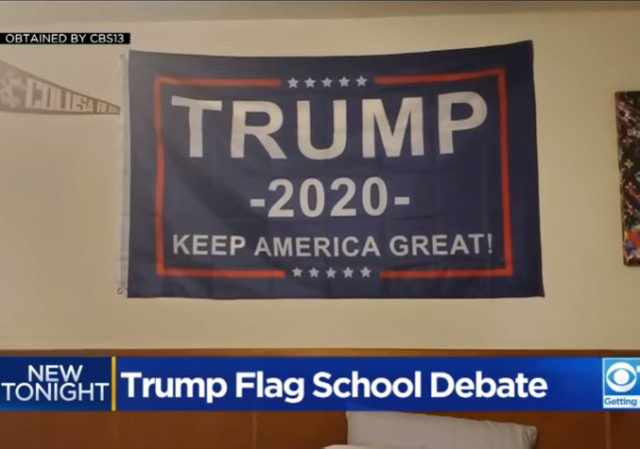 A high school student in California claims he was recently told by a teacher to remove or cover the Trump flag in his bedroom during an online class.

She gave him 15 seconds to comply and even counted out loud, but after a few seconds, the student signed himself out of the class.

Can anyone even imagine such a thing happening back in 2008 or 2012 if the student had an Obama sign on his wall?

WATCH: Teacher Threatens to Kick Student Out of a Virtual Classroom Because of a Trump Flag

A student at Colusa High School in Colusa, California was threatened to be kicked out of a virtual “classroom” for having a Trump 2020 flag on his bedroom wall. The student’s chemistry teacher gave him an ultimatum: move his camera or take down the flag. He had 15 seconds to make a decision before he would be kicked out of class. He waved goodbye and hung up the video call.

“Since school has begun, my son has had this flag, Trump flag hanging in his background,” Tiffany, the boy’s parent, told CBS 13.

According to the parent, it’s not the teacher’s fault for having no guidance on how to handle things like this during virtual learning. It’s why Tiffany and other parents asked the school board to clarify the code of conduct for virtual learning.

The school’s code of conduct and dress code prevents students from wearing clothing that promotes alcohol, tobacco, or drug symbols, sexual messages, messages that are obscene or profane and those that degrade any race. There isn’t anything in the 38 page document talking about politics, elections or political campaigns.

Laura Haefeli of CBS 13 in Sacramento has more:

Tiffany says her son’s high school chemistry teacher did not approve of the political statement and asked him in the middle of class to get rid of it.

“You can sit up, remove the flag, or reposition your camera within the next 15 seconds or I’m kicking you out of class,” the teacher said during their virtual class.

Tiffany says the teacher then began to count and did not make it to 10 before Tiffany’s son waved goodbye and exited the virtual classroom.

She doesn’t blame the teacher for the uncomfortable moment that’s made its way to social media.

“She is a new teacher and it’s a mistake. There hasn’t been any guidance given to her as a teacher for the school,” Tiffany said.

The mother of the student deserves credit for the way she handled this. Not everyone would be so understanding.

This type of political bias always seems to go in only one direction.

Student should have stayed there staring at the camera while she continued to count. And hopefully the next day and the next week, even more students would have a Trump flag.

If you find that supporting our country and our President to be somehow objectionable or profane, maybe you should not be a teacher in a Free country!!