Man taunts them as they leave: “Philly waking up. Revelation 2:09, the synagogue of Satan.” 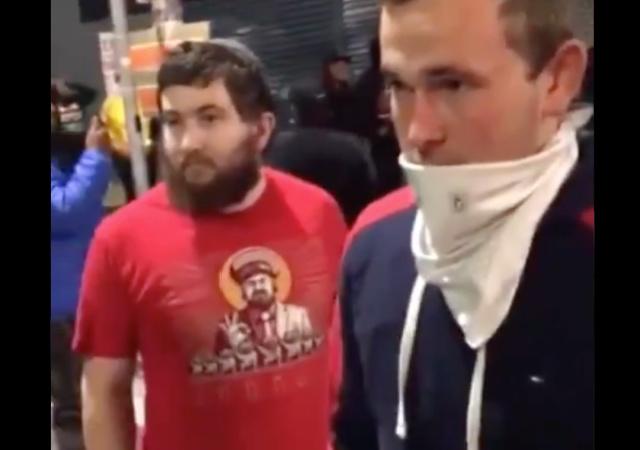 The mob claimed the Jewish men belonged to the “synagogue of Satan.”

Philadelphia, PA – BLM kicking Jewish men out of the area while telling them “you don’t live here,” and “Synagogue of Satan.” BLM is racist #Philly pic.twitter.com/lmK6H6nscX

“Amalek, what y’all doing down here? You don’t live here,” someone asks the men, referencing the Amalek tribe, which the Jewish Virtual Library says was the first enemy of the ancient Israelites.

“Y’all know we the real Jews, right?” continues the raspy-voiced man, who appears to be the one filming the clip.

“This ain’t your fight. Y’all gotta go,” another man tells them, as others start ganging up on them, shouting for them to leave.

“We’re just showing solidarity,” one of the Jewish men politely tells them, agreeing to leave but being surrounded and repeatedly told, “Get the f–k out!”

One of the protest group, hiding behind a full-face mask, violently pushes one of the Jewish men, and several appear to follow them as the abuse continues as they leave.

“Philly waking up. Revelation 2:09, the synagogue of Satan,” the man who confronted them says as they leave.

Are these men shocked? These riots have nothing to do with social justice or equality. It has to do with violence and chaos and spreading their own hatred and racism.

Samantha Mandeles has done a wonderful job reporting on the anti-Semitism and anti-Israel violence seeping into the riots after George Floyd’s death in late May.

Orthodox Jews violently attacked by mob @ BLM protest last night in Philly. They told protesters they were there to show solidarity. Mob shouted anti Semitic & racist hate as they assaulted victims. Spoke to victim, says he feared for his life. This needs to be condemned by all! pic.twitter.com/oAY2kSaqM4

Growing up in the 1960’s, I had a Jewish friend who’s father and uncle were part of a family that lived in Austria in the 1930’s. Their father (my friend’s grandfather) had fought for Austria-Hungary/Germany in the Great War, alongside other Jews and non-Jews (like Adolph Hitler). They wouldn’t believe that Austria & Germany would turn against their fellow patriots . . until it was almost too late. They got out right after Kristelnacht in 1939 and yeah, they were very lucky.

Maybe just a minority of BLM, “Squad,” and other leftist Antifa and other activists now, but due caution if/when they gain power.

As Bridgette Gabriel says of the radical Jihadists:
They may be in the minority but they are controlling the agenda.

Muslims have been driving or murdering Christians and people of other religions out of areas they control, it follows that others should be able to do the same with Muslims. We should be moving all Muslims to Africa, and both Obama’s with them. Hillary, Pelosi, Schumer and other swamp critters probably should go with them.

1960’s all over again. The blacks sent their Jewish supporters home then, too. Told them it wasn’t their fight, and their support was neither needed nor wanted. Sad, but unsurprising, how dare pale skinned people have a clue what being oppressed and persecuted is like.

Yet they don’t seem to have much of a problem with gentile white liberals. Weird how that works out.

came up in the ’60s early ’70s myself–whipped ass and got my own ass whipped a few times on the west mall mixing with sds and the black panties–even in the midst of that, did not see the level of hatred present in blm/antifa today–didn’t seem to be join us/die–not quite that intense/dangerous as it seems to be now–still a lot of respect for law enforcement and even the most virulent protesters knew where the limits were then–those perceived limits seem to have gradually evaporated since 2008–is there really any confusion as to why?”

as Paine said: ” I prefer peace. But if trouble must come, let it come in my time, so that my children may live in peace.”

How sad to see blacks aligning themselves with right-wing white Fascists. A new view of intersectionality — blacks that hate Jews and whites that do, too…hey they have something in common! 🙂

Those Jews showing solidarity with the BLM lunatics (being charitable here) truly deserved a hefty arse-kicking for sheer stupidity. Get this through your thick skulls: They do NOT want your assistance. Your money, your homes, your property? Yes. You: No!

Go pet a scorpion or a cobra and expect it to return your affection.

Offhand I would say the taunts were made by members and friends of the Black Hebrew Israelites. Remember the loons that taunted the Covington teens? They would view non BHI Jews as false Jews and members of the Synagogue of Satan. It is not surprising that you would find the Black Israelites in with BLM. Racists tend to find each other.