“The only court packing going on right now is going on with the Republicans,” Biden falsely claims. 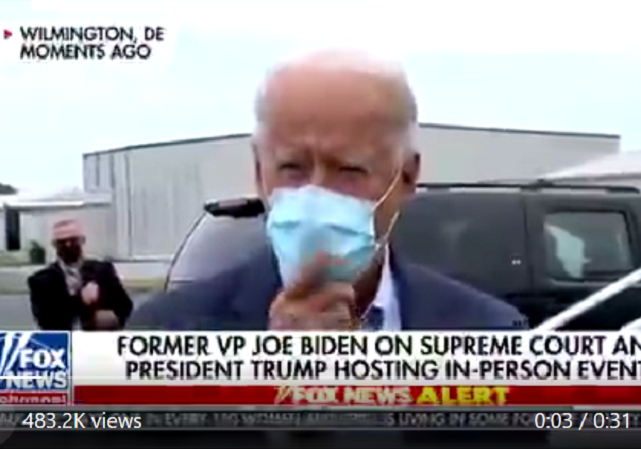 The question has become a thorn in Biden’s side, and although he attempted to remove it by saying we’ll find out where he stands on court packing “when the election is over,” it didn’t work. Predictably.  While the media is willing to run cover for Biden on his racist comments and many flip-flops, even they can’t ignore something as significant as court packing.

Adding additional seats to the Supreme Court in order to ensure a Democrat advantage is an enormous issue, and one that Biden will not be able to dodge . . . as he is quickly finding out.

On Saturday, a reporter asked Biden if voters deserved to know where he stands on court packing, and he responded, “No, they don’t.”

Notice he starts out by saying that the only people asking about this issue must be Republicans.  He seems to be assuming that no Democrats anywhere would be against his packing the Supreme Court.  Obviously, that’s not the case, though, given that many on the left, including socialist Sen. Bernie Sanders (I-VT), reject court packing.

Buried in this rejection of the American voters’ right to know where he stands on the issue of adding seats to the Supreme Court to ensure a Democrat majority, Biden also attempts to turn the discussion to President Trump, whom he falsely accuses of “packing” the court by lawfully nominating Amy Coney Barrett to fill the Supreme Court seat left vacant upon the death of Ruth Bader Ginsburg.

Biden also claims, utterly falsely, that it’s “not constitutional” for a sitting president to fill a Supreme court vacancy during an election year. An argument even Democrat leaders aren’t making (because it’s untrue).

Biden: The only court packing that’s going on right now is going on with Republicans pic.twitter.com/sMpIqQYxfq

So this is the line Biden‘s handlers came up for him to use, took a long time but this is how they are going to attempt to thread the needle. https://t.co/bM4MXmfMnP

Asked if the public deserves to know his view on court packing before the election, @JoeBiden dodges, noting that the GOP is rushing Judge Coney Barrett's nomination.

"The only court packing going on right now is going on with the Republicans," he said. "It's not constitutional"

Fact check: it is explicitly constitutional

Biden is playing word games and attempting to gaslight the American people (whom he believes don’t deserve to know where he stands on court packing) that court packing is actually nominating and/or confirming a judge to the Supreme Court during an election year in which both the White House and the Senate are held by the same party.

Dems are trying to change the meaning of the phrase “court packing” to confuse voters. Appointing a justice to an open seat is obviously not the same thing as adding new seats entirely. It’s insulting that the media allows him to get away with this trick.

I’d love to see some conservative gadfly reporter stand up and ask either Biden or Commie-lah: “Will you now condemn packing the Supreme Court?”

The following link describes that a vacancy has occurred in the final year of a Presidential term 29 times. The U.S. Constitution has been in effect since 1789, so that is 58 ends of term since then. So, a vacancy has occurred at least half of the time (29 out of 58). Read the link to learn of the outcomes during those 29 events as presented by U.S. Senator Cruz from Texas: