The third Arab nation this year to open ties with Israel, after the UAE and Bahrain. 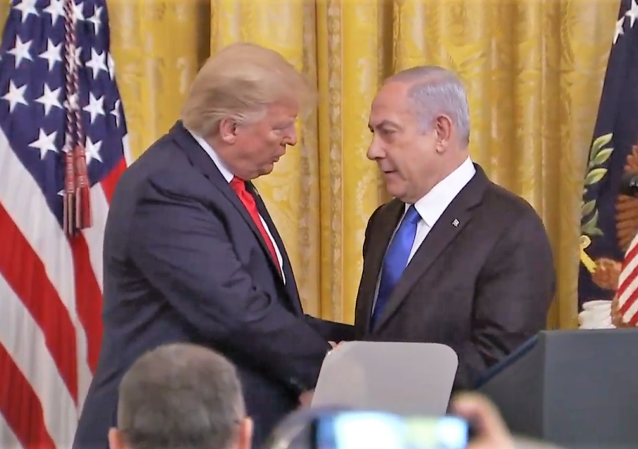 The Trump administration has just announced another Middle East breakthrough. Sudan and Israel will normalize ties. This is the third Arab nation to do so as a result of Trump’s efforts, in addition to the United Arab Emirate and Bahrain.

The Deputy Assistant to the President tweeted:

#BREAKING: President @realDonaldTrump has announced that Sudan and Israel have agreed to the normalization of relations— another major step toward building peace in the Middle East with another nation joining the Abraham Accords 🇸🇩 🇮🇱 🇺🇸

The step follows Sudan’s removal from the list of state supporters of terrorism:

BREAKING: Sudan and Israel announced today they decided to “end the state of belligerence” between them and start a process of normalization. The announcement came after a phone call between president TrumpPM Netanyahu, Sudanese sovereignty council head Burhan & PM Hamdok

Thanks to President @realdonaldtrump for signing today the executive order to remove Sudan from #SSTL.
We're working closely with the US Administration & Congress to conclude the SSTL removal process in a timely manner.
We work towards int'l relations that best serve our people.

The Jerusalem Post previously reported that the Palestinian leadership would view the opening of relations between Israel and Sudan as a disaster:

The possible normalization of relations between Israel and Sudan will have a negative impact on the Palestinian issue, Palestinian officials said Thursday.

Responding to reports that Sudan may become the third country in recent weeks to establish relations with Israel, after the United Arab Emirates and Bahrain, they said it would be another severe blow to the Palestinians….

“If Sudan joins the train of normalization with Israel, it will be another setback for the Palestinian issue,” a Palestinian Authority official told The Jerusalem Post. “It won’t come as a surprise, but Sudan will become the third Arab country to stab the Palestinians in the back and act in violation of Arab consensus and resolutions.”

During a call with Prime Minister Benjamin Netanyahu, Suden Sovereign Council president General Abdel Fattah al-Burhan and civilian leader and Sudanese Prime Minister Abdalla Hamdok, Trump brought reporters into the Oval Office and announced: “The State of Israel and the Republic of Sudan have agreed to make peace.”

“We are expanding the circle of peace so rapidly with your leadership,” Netanyahu could be heard telling Trump, who responded by saying. “There are many, many more coming.”

From 3 NO’s to 3 YES’s:
In 1967, the Arab world infamously declared in Sudan’s capital no recognition, no negotiation, and no peace with Israel. Today, Sudan joins the UAE and Bahrain as the 3rd Arab country to make peace with Israel in 2020.
🇮🇱 🇦🇪 🇧🇭🇸🇩 🇺🇸

HUGE win today for the United States and for peace in the world. Sudan has agreed to a peace and normalization agreement with Israel! With the United Arab Emirates and Bahrain, that’s THREE Arab countries to have done so in only a matter of weeks. More will follow! pic.twitter.com/UHB8H6oaZc

Keep in mind that while Biden is sitting in his basement for days on end putting a lid on his campaigning, Trump is doing multiple campaign stops across the country every day, fundraisers, his regular daily responsibilities as leader of the free world, and somehow, somehow manages to close international deals that make the world freer. Just sayin’.

I wonder what they pumped into Biden during his 4day hiatus before the debate. He actually managed the full time and compared to his recent utterances was somewhat cohesive.
With this peace accord with Sudan, maybe we in Australia can return the rabble to their country thus removing some very angry nasty pieces of work from our shores.

The very best part is how badly aoc, tlaib and the others are crying their eyes out.
Gives one a warm fuzzy feeling knowing it’s destroying them inside.

“stab in the back”?
seems i heard that one before.
let me think…i know, it was shickelgruber,the original A H.