Who Should Trump Nominate for SCOTUS? (Reader Poll)

Who Should Trump Nominate for SCOTUS? (Reader Poll) 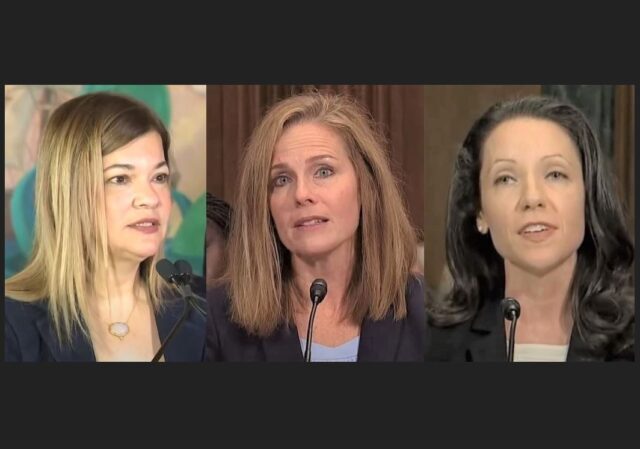 Trump says he’s nominating a woman to fill the Supreme Court vacancy created by the death of Ruth Bader Ginsburg. And he’s doing it this week. So we’re holding an ’emergency’ reader poll. Vote soon, since the decision could come any day. The poll will be open until Trump announces his pick.

The Hill has a fairly neutral write up of the three. For a more expanded list of potential female nominees, see Prof. Josh Blackman’s write up.

Short versions and my take:

Amy Coney Barrett — The strongest record, a scholar, former Scalia clerk, hated by liberals because she’s seen as ‘too Catholic’ and thus a risk to Roe v. Wade. Was seriously considered when Kavanaugh was nominated in 2018, but passed over because Kavanaugh was seen as safer (hah!), and also did not have as extensive an appellate record as Kavanaugh. Her appeals court nomination was hotly contested (55-43 vote), so she’s been vetted more so than most appellate nominees. All the above combined with her having 7 children (5 biological, 2 adopted from Haiti) cause liberal feminist heads to explode.

Barbara Lagoa — Doesn’t have the clerkship and conservative movement pedigree of the others, and served only a short time on the Florida Supreme Court before being recently nominated and confirmed to 11th Circuit. She’s a favorite of Ron DeSantis, and served at a mid-level Florida appeals court for several years. She’s on the short list at least in part because given the current politics, it helps that she’s Cuban-American and from Florida. Not clear how thoroughly she has been vetted since her nomination to the 11th Circuit was not hotly contested (80-15).

Allison Jones Rushing — Considered the least likely of the three to be picked. She’s young (38), but has an impressive resume (Clerked for Thomas at SCOTUS, and Gorsuch at 10th Circuit). On 4th Circuit since 2018. Hated by the left because of her “ties” (not clear what those are or were) to Alliance Defending Freedom. If nominated and confirmed, could be on the court for 40-50 years! Had a contested appeals court nomination (53-44), but not clear if she was vetted as closely as Barrett.

Analysis. The following is premised on Trump pushing for a pre-election confirmation vote: Assuming, as almost everyone does, that it comes down to Barrett and Lagoa, it’s a competition between ideological strength (advantage Barrett) and electoral strength (advantage Lagoa). Regardless of who is nominated, Democrats are going to go scorched earth. Don’t assume it will be worse against Barrett than Lagoa, Democrats historically have displayed particular viciousness for ‘minority’ conservative nominees (Clarence Thomas, Miguel Estrada, Neomi Rao). But that presents a dilemma. Assuming Trump pushes for a preelection vote and is not sabotaged by Senate Republicans, Kavanaughing Lagoa in the run up to the election could harm Biden in crucial Florida. That has to be a consideration for Trump. Also balance that Barrett has tasted Democrat fire already, whereas Lagoa has not; nominating a relative unknown carries greater vetting risks. Also consider this: Susan Collins is known to be hostile to Barrett, and while Collins has said the Senate “should” wait, she will will have a vote and it might be easier to bring her along at the end if it’s not Barrett and Mitch McConnell needs her vote to confirm. Rushing is the wild card — she is ideologically strong, but would Trump nominate someone so young in such a sensitive contested timeline?

Lagoa. Barrett’s ruling in support of Gov. Pritzker’s lockdown of IL was egregious. Barnes suggests that this is a pattern for her. He also points out that the clerkship business can be gamed. I find his reasoning compelling.

I’m not all clear why Jacobson argues in favor of Barrett’s ideological (maybe not the best word) superiority over Lagoa. It can’t be that Professor Jacobson likes it that Barrett ruled for Pritzker based on the Jacobson case …. 🙂