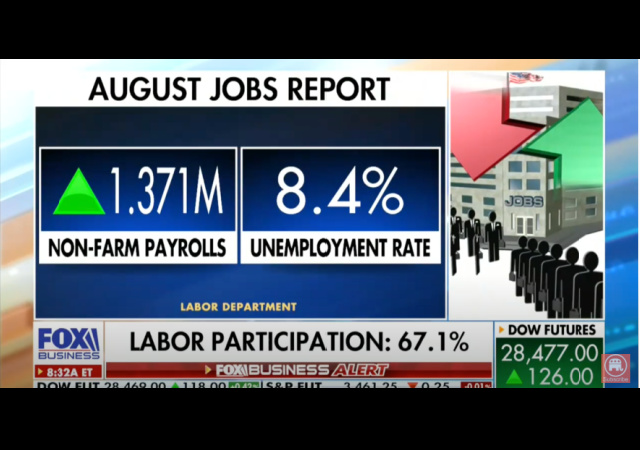 The Labor Department reported the economy added 1.4 million jobs in August and the unemployment rate dropped to 8.4%.

This is a huge drop from July, which saw a 10.2% unemployment rate.

Considering where we were in March and April, the economy is humming along again. The economy is growing, people are starting to get back to work, etc:

The unemployment rate was by far the lowest since the coronavirus shutdown in March, according to Labor Department figures released Friday. An alternative measure that includes discouraged workers and those holding part-time jobs for economic reasons also fell, down to 14.2% from 16.5% in July and 22.8% at the peak in April.

Economists surveyed by Dow Jones had been expecting growth of 1.32 million and the jobless rate to decline to 9.8% from 10.2% in July.

“It’s another great day for American jobs and American workers,” Vice President Mike Pence told CNBC. Pence added that the job growth and the single-digit unemployment rate is “real evidence that the American comeback is underway.”

Markets rose sharply on the news, with Dow futures pointing to a gain at the open following an aggressive sell-off Thursday. 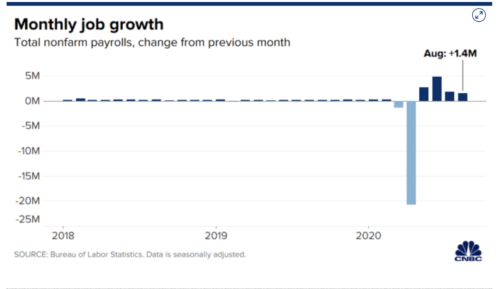 The coronavirus pandemic hit leisure and hospitality the hardest. That sector saw 174,000 new jobs in August. The majority of those new jobs came in bars and restaurants.

So while indoor dining can only have a certain amount of people inside it still means the business needs people to serve and wait on people.

Unemployment seemed to fall across the lines:

In August, the number of persons who usually work full time rose by 2.8 million to 122.4 million, and the number who usually work part time increased by 991,000 to 25.0 million. Part time workers accounted for about one-fourth of the over-the-month employment gain. (See table A-9.)

From the chart, it looks as if we have rehired about half the people who lost work in the pandemic. That’s outstanding. We’ll have two more jobs reports before the election. If those are as good (? better) than this one, Mr. Trump will have a lot to talk about in the last two weeks.

Just a couple of things here.

First the real unemployment rate is actually about 20%, not the 8.4% being touted by the government.

I realize that people want to believe that the economy is coming back. But it is not, to any significant degree. It will only show a marked improvement when ALL of the stupid restrictions are lifted. And that is not going to happen anytime soon.

Now, what happens when the eviction and foreclosure restrictions are lifted? What happens when the various bankruptcy moratoriums expire? How are small business and their workers going to pay their bills? How long can creditors continue to accept the losses that they are incurring? What is the plan, Stan?

IS the economy coming back? In some states it is and those states have opened sooner. The closed states are still suffering. My state (OK) is opening schools on a variety of schedules. The local district has a modified schedule with kids in group A or B. A is in school M-T, W is virtual for everyone, B group goes in on T-F. The schools are playing sports, with delays if required. Rules are decided locally based on state recommendations. Yes, the cases have increased in the young age groups, but the number of people in the hospital is decreasing.

Your fourth point on the restrictions and what happens is a good one. Who knows but it will hurt. But, I would suggest that you plan for your household since you cannot really impact the national plan, Stan.

Thank you for catching the typo. My bad.

Is the economy recovering? Yes. That is not the question, nor the concern. The important questions are 1), how much damage has been done and continues to be done to the US economy, 2) can the current recovery be maintained, as deferred liabilities begin to kick in and 3), how long will it take for the economy to recover to the level it was at in January, 2020? Our leaders sunk our economy in two weeks. How many small businesses will not reopen? How many large companies will downsize to survive? How many former fulltime employees will have to settle for lower income, part-time jobs? And, how do we cover the costs of the various federal bailout programs? Let me know when you come up with the answers.

1. (A) How much damage has been done? It depends. For self employed and small business dependent upon customer traffic in a physical location – lots of damage, many will not reopen. Many have already gone under. For government workers and corporate workforce not nearly as bad. Almost all have retained their jobs and will continue to.

General points.
Unemployment measurements: Like it or not the U3 report, otherwise referred to as the headline number, is what is reported as the cited report for historical comparisons. Is it flawed? Maybe, if we discount the difficulty in explaining the difference between U3 v U6. Obviously U6 is a broader and more reflective measure of unemployment, but most folks other than economists and folks that work in finance don’t know there are actually several different measures of unemployment.

How long, how many how much damage before it gets better if it can? This will sound harsh. People gain and lose jobs every day. Business open and shut down for good every day. People accept lower wages as a trade off every day. The Rona response has vastly accelerated this. As bad as it is, every business that comes out the other side will be stronger.

These surviving businesses will have more market share, more capital and their choice of the better employees. The business that fail have real estate location, equipment and employees that someone else will scoop up and start another business. That is the business cycle. Nothing new, just compressed. Black swan events like the response to Rona have happened many times and will do so in the future.

The sooner the States and localities get out of the way of the economy the quicker the economy overall and everyone’s individual economic situation will improve.

I was just on MSN.com and you had to search long and hard to find this news. You then had to sift through 9 paragraphs and 5 charts to find out that 1.4 million new jobs were added. As for the number 8.4%? It appears nowhere in the article. They just talk about how it dipped below 10%. That was quite a dip and quite an oversight on the part of the Lefty news source.

Extremely positive numbers. The shift to ‘soft reopening ‘ in some locations and the general public being ‘over’ the more draconian lockdown aspects and thus not staying home but going to restaurants in person ect, even at reduced capacity is driving the re-employment.

No 8%+ unemployment in the headline number isn’t great historically. On the other hand the employment situation is self imposed artificially as a response to a ‘pandemic ‘. Now that more information is trickling out about the veracity of the Rona test numbers and the simple fact that government can’t really prevent folks from enjoying their liberties unless the population agrees, and many do not, government is fast approaching a decision point.

Take NCAA football. The SEC, ACC and B12 are all committed to playing. I am not aware of a state in their combined footprint that is eliminating HS football. Now look at the footprint of the BG1 and PAC12. Some states, are open for HS football, Ohio while Michigan is not. Using this as a proxy for opening up v remaining lockdown yields an interesting story. Not the whole picture by far but an easy shorthand version for contrasting.

Many of the members of the BG1 supposedly wanted and still want to play based on reports from athletic directors. Michigan Gov Whitmer, in effect stood in the way. IMO, she made a political decision. The effect of which is to further highlight the arc to recovery between two various states and regions of the nation.

Just as nations have unemployment rates so do regions and so do individual states. As more states pass through their ‘spike’ period of Rona transmission, come out the other side and loosen the lockdown rules then their states unemployment numbers will fall. The folks trapped ‘behind the lines’ as it were are most certainly paying attention. They will vote as a means to express their displeasure with d state and local officials who are seemingly unnecessarily prolonging economic pain for purely political reasons.

Every single fast food restaurant in my town has a “Help Wanted” sign out front. Ditto for Wal-Mart, all the supermarkets, and Lowe’s. It’s the same for many small businesses. What does this mean?