Fox News reported the Trump campaign’s request for ears to be checked for electronic devices prior to tonight’s debate. The Biden campaign originally agreed, “but are now declining.” 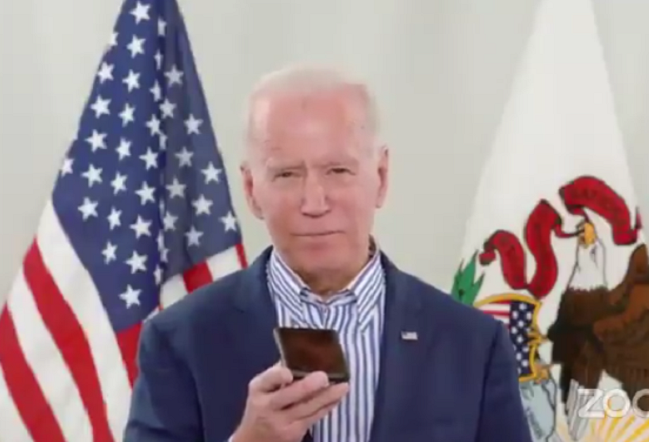 Just a few hours from now, President Trump and Democratic presidential nominee Joe Biden will take the stage for the first of three scheduled presidential debates between the two.

While Trump has in recent weeks openly called for “Sleepy Joe” Biden to have a drug test in advance of tonight’s debate, we’re learning today of some the behind-the-scenes negotiations that have gone on between the two campaigns:

Fox News has learned that the president’s re-election campaign wants the Biden campaign to allow a third party to inspect the ears of each debater for electronic devices or transmitters. The president has consented to this kind of inspection, but Biden has not, so far, sources said.

Over the last several weeks, the former vice president’s campaign has also requested two breaks — one every 30 minutes — to break up the 90-minute commercial-free program. But that request has been denied by their Trump counterparts, Fox News is told.

The Biden campaign requested two breaks (one every thirty minutes) during tonight’s program, which was denied by their Trump counterparts, in negotiations over the last several weeks. (3/3)

Regarding the Biden campaign’s request for two breaks, Bret Baier noted this morning in an exchange with Bill Hemmer that the issue of breaks was not actually up to either campaign to say yay or nay to. Baier also made the following observation:

Obviously, the demand that will get the most attention in the media today is the one about checking for ear devices. Some “journalists” are already grumbling about it, including CNN White House correspondent John Harwood:

Apparently, Harwood is either completely unaware of or finds irrelevant the fact that Biden has been caught numerous times using teleprompters during what were supposed to be unscripted interviews with reporters.

The left-wing hacks at Media Matters were also triggered by the news of the Trump campaign wanting ears checked:

MMFA “director of media intelligence” (seriously) Lis Power was especially incensed, laughably attempting a facial expression read of both Hemmer and Baier to determine what they were allegedly trying to imply:

Fox's 'news-side', including Bret Baier, are very much with a straight face implying that Biden should agree to have his ears checked before the debate for listening devices.

This is fucking absurd.

While we don’t know as of this writing what the Biden campaign’s response will be to the ear inspection request, there are some alternative suggestions being thrown around on Twitter for how the Trump campaign should handle the (potential) issue in their own way:

If Biden won’t let Trump’s people check him for electronic transmitters in his ears tonight, then Trump should be able to use a frequency jammer just in case

Trump's body man needs a device to jam the notes coming into Biden's ear, would be super funny https://t.co/ofwpEU8Rn3

Trump should just call him out on stage, challenge him to ear check each other, on the spot.

I wouldn’t be surprised one bit if he did just that.

Tonight’s debate will be at Case Western Reserve University in Cleveland, Ohio and starts at 9 pm ET. It will be moderated by Fox News host Chris Wallace.

A source told the New York Post the Biden campaign had originally agreed to the earpiece check “several days ago” but have now backtracked:

Next thing you know Biden’s team will call yet another mysterious “lid” shortly before the debate is scheduled to start.

Had another thought on Biden asking for two breaks at the 30 minute marks. The Trump campaign should say “no” as they have, but add that if Biden needs to step out to use the bathroom, get an injection, or take a pill, he’s welcome to do so, but President Trump will be continue with the debate regardless.

I fully expect excrement to emanate from all the orifices of dim-witted, dotard-marionette, Biden.

I wonder if there’s a way to make the earpiece rapidly overheat so Hidin’ Biden would have to rip it out onstage.

Biden has been debating for nearly half a century, so I wouldn’t completely write him off

He’s a master at it.

Neither would I. There’s no small risk for Trump if he lets Biden get under his skin and starts ranting.

If anybody gets under anybody’s skin, Trump will get under Biden’s.

Biden has a temper and it’s getting worse (one of the symptoms of both Alzheimer’s and dementia, I’m told).

I can hardly wait for Biden to challenge Trump to a push-up contest, to step outside and fight, or call him a “lyin’ dog faced pony soldier.”

You know, how Biden acts when voters get under his skin.

Frankly, I think the most likely outcome is that they are both coherent, in which case the media will declare Biden the winner. The only way they do otherwise is if Biden melts into a puddle, including an eyeball explosion. For his sake, I hope whatever drugs they’ve fed him don’t raise his blood pressure too high. LOL

Do Biden’s ears look lopsided in the above picture?

Either he has had an undisclosed surgery or it is a flesh-looking earpiece!