Daily Caller attorney: “But this is not China. Those reporters flat out have a constitutionally protected role to play on our streets.” 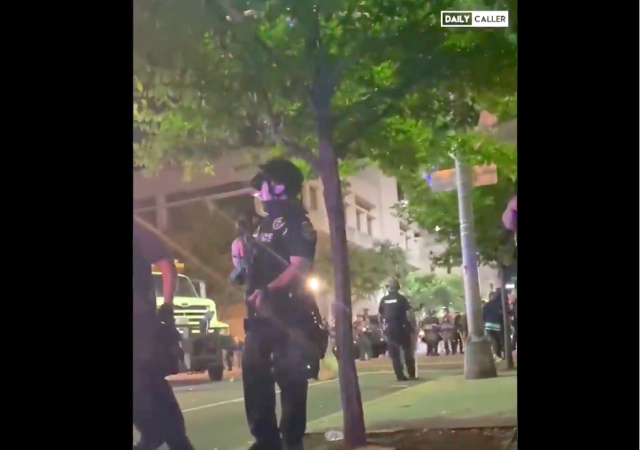 The Daily Caller has threatened to sue the Louisville Police Department after officers arrested two of their reporters during the riots despite having press credentials.

We are all on the ground right now and police are taking people and putting them in zip tie cuffs pic.twitter.com/eIJJF1t1Ub

Daily Caller Editor-In-Chief Geoffrey Ingersoll told the police Talcott and Ventura are members of the press and “exempt from curfew.” The police also did not allow the two reporters to speak to attorney Neil Patel, who is the founder of The Daily Caller.

I’ve now notified @LMPD that both @shelbytalcott and @VenturaReport were reporting for an accredited media outlet and were operating in the capacity of press. My expectation is that they will be swiftly released. https://t.co/BBa1b8yF1W

Another update: @LMPD tells me @ShelbyTalcott and @JorgeVentura05 will be charged with two misdemeanors related to breaking curfew & unlawful assembly for their alleged failure to comply with police orders to disperse and for press to relegate themselves to an “observation area”

Sorry @JorgeVentura05 is not the right guy. I meant @VenturaReport

The Louisville Department of Corrections told Ingersoll that Talcott and Ventura will be processed and face charges just like everyone else in the group. They will each face 2 misdemeanor charges due to their alleged failure to go to a press “observation area” before the arrests began. It’s unclear if the observation area was announced, where that area was, or if Talcott and Ventura were ever told to go there.

“The Louisville police arrested two of our employees Wednesday night,” Daily Caller founder Neil Patel said in a statement. “We have informed the police that these are reporters who were peacefully doing their job, but they are still refusing to release them.”

“They will not even let us speak with them. Given the fact that our reporters have been repeatedly harassed, punched and even shot at during past protests, we fear for their safety in lockup with people who may want to do them harm,” Patel continued. “No other news outlet has been on the ground at more protests and riots and none have done a more balanced job of telling the public what is happening.”

“We appreciate the difficult situation that officers are in trying to balance their own safety while allowing protestors to exercise their first amendment rights,” he added. “Unlike other outlets, we have interviewed police about this and told their side of the story. But this is not China. Those reporters flat out have a constitutionally protected role to play on our streets.”

“The Louisville Police Department is going to find out all about this in the form of a lawsuit unless things start changing fast,” Patel said.

Chief Video Director at The Daily Caller posted an update:

Statement per @ShelbyTalcott from the inside:

“This is absurd. I am packed in with 28 other people in a 20×20 cell. Not all of us have masks, and there is not enough room so people are sleeping on the floor.”

Just spoke to @VenturaReport and he has been released. @ShelbyTalcott still inside but hopefully she will be out soon.

Can we start a pool, like a football pool and put money in escrow to buy the Louisville PD bagels, donuts, Mickey Ds, steak, whatever? I like the cut of their jib.

OK, when I saw this I changed my mind.

This statewide phone number can be used to report businesses violating orders to close due to COVID-19.”