Susan Collins Will Vote No on Trump SCOTUS Nominee: ‘We’re Simply Too Close to the Election’

Susan Collins Will Vote No on Trump SCOTUS Nominee: ‘We’re Simply Too Close to the Election’

“…and in the interest of being fair to the American people — and consistent, since it was with the Garland nomination.” 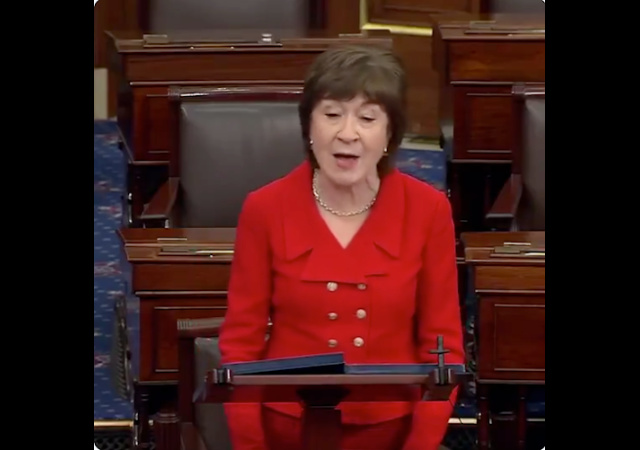 Sen. Susan Collins already decided to vote no on a floor vote for a SCOTUS nominee.

Now she decided to vote no on the nominee, even though President Donald Trump hasn’t nominated anyone yet.

“My statement was a model of clarity. … I made it very clear, yes, that I did not think there should be a vote prior to the election. And if there is one, I would oppose the nominee,” Collins told reporters, when asked if she would oppose a nominee before the election.

Collins added that her decision was not based on whomever the nominee is but because of the proximity of the election and the decision by Republicans in 2016 to refuse to move forward with Merrick Garland, then-President Obama’s Supreme Court nominee.

“Not because I might not support that nominee under normal circumstances, but we’re simply too close to the election, and in the interest of being fair to the American people — and consistent, since it was with the Garland nomination,” Collins said.

“The decision was made not to proceed, a decision that I disagreed with, but my position did not prevail. I now think we need to play by the same set of rules,” she added.

She already wanted to hold a hearing for Garland, but their meeting fully convinced her “that the process should proceed.”

But Collins seems to forget history. It is not consistent as Senate Majority Leader Mitch McConnell explained in 2018 (emphasis mine):

“They don’t know much history,” McConnell said of his detractors during an interview with CBS News’ “Face the Nation.” “You have to go back to 1880 to find the last time a Senate controlled by a different party from the president confirmed a Supreme Court justice to a vacancy created in the middle of a presidential election.”

“They [have] also conveniently forgotten that Joe Biden said in 1992 when he was chairman of the Judiciary Committee, Democrats controlled the Senate, a Republican in the White House, if a vacancy occurred, they wouldn’t fill it,” McConnell told host John Dickerson.

So Collins actually went against the rules and precedent in 2016.

I wonder if this will give other senators some courage. Sen. Lisa Murkowski said she is against a floor vote on the nominee, but has not said if she would vote yes or no on the nominee.

Sens. Mitt Romney and Cory Gardner said they will vote yes on a floor vote.

If Mitch needs the vote, Lindsey should talk to her.

You’re being paranoid. Nobody’s suppressing anything. If you look at that video you will see that you can’t filter it by speaker, because it has no speakers listed. Presumably they haven’t yet done the work to create a speakers list and mark where each person spoke, so none of the participants’ names are in the search and it doesn’t come up when you bring up all videos for a given speaker. But if you search for “maine us senate debate” the third link is “WCSH-TV, Portland ME”, and that brings it up as the first video.

Senator Collins, you were elected. The President was elected. DO YOUR JOB or resign.

That’s ok.
The needs of the many do not outweigh the needs of the Electoral College.
Trump will be forced to stay in office until all the legal challenges have been ruled on.
Of course, we will have a full quorum in the Supreme court long before then.