Riots and looting in Seattle, Portland, and Chicago are one thing, but we’re not used to watching such events in the Kenoshas of the world, which are much smaller cities not known for leftism. 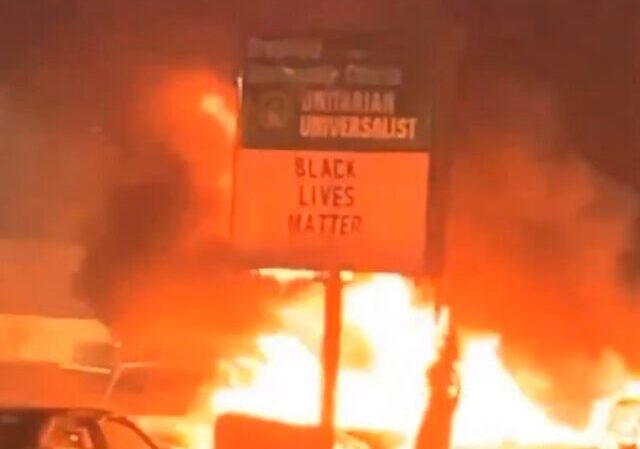 When Kenosha erupted in flames, it wasn’t that the actions of the rioters were so different than in other cities across America. Unfortunately, it’s become the new business-as-usual, because we’ve grown accustomed to seeing much the same things happen in deep blue (i.e. leftist) cities such as Seattle, Portland, and Chicago.

But we’re not used to watching such events in the Kenoshas of the world, which are much smaller cities not known for leftism.

The left would have us think Kenosha’s turmoil was a spontaneous demonstration by the people of Kenosha, upset at the Jacob Blake shooting. But to me, that never seemed especially likely. It seemed more plausible that although some of the demonstrators would be from Kenosha, a great many of the ones looting and burning would fall into the category of “outside agitators.”

And that indeed seems to have been the case, according to the Kenosha Police:

Although Kenosha no doubt has its own unique characteristics, it also seems like Everytown USA. That’s what probably was especially frightening about the violence there, to many people. If the mayhem had remained confined to a small number of blue cities far far away, it would certainly be upsetting but was less likely to strike as many people as personally dangerous.

We now have evidence that Kenosha changed that perception:

The biggest change was among suburbanites who were, it seems, largely unaware of protests (and ensuing riots) when they were affecting major urban areas but began to pay attention when Kenosha, a more suburban, more residential area of Wisconsin, started seeing major damage.

Approval of BLM “declined in each of five urban-suburban categories including cities, suburbs, exurbs, small towns, and rural areas,” the study’s authors note. “In August more respondents approved than disapproved in cities. Suburban areas, which were substantially net positive in June, became net negative on approval in August, though not as negative as exurban, small towns or rural areas.”

And Democrats are also souring on the situation, Marquette says: “Net approval also declined across all three categories of party identification, with the largest declines among Republicans.”

The perception that the rioters have overplayed their hand, and that it will have political repercussions, is apparently one of the main reasons that the Biden camp has started to condemn the riots. Naturally, though, they’re trying to pin them on the right. But I think that particular dog won’t hunt.

I’d never leave my Business UN-guarded under such circumstances.
I fail to understand this.

What happens when they set your building on fire?