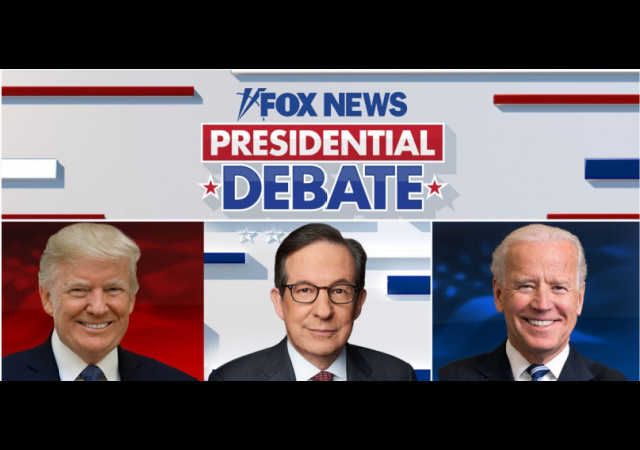 This should be delicious, especially since Biden cannot evade Wallace.

Trump and Biden will debate for 90 minutes.

President Trump to Joe Biden: "You have treated the Black community about as bad as anybody in this country." #Debates2020 pic.twitter.com/y8YnBBrHHS

This was one of Trump's strongest answers #Debates2020 pic.twitter.com/s5fecdZ7ZP

Really surprising that Trump hasn't brought up the fact that Kamala promoted, and Biden staffers donated to, a bail fund that bailed out convicted domestic abusers and a man accused of sexually penetrating an 8-year-old girl #Debates2020

President @realDonaldTrump rips Joe Biden for his horrible treatment of Black Americans and his racist comments during his 47 years in government#Debates2020 pic.twitter.com/cWrVfd8Iko

"Name ONE Law Enforcement group that came out and supported you…I don't think there are any!"@realDonaldTrump to Lawless @JoeBiden #Debates2020 pic.twitter.com/FYj3i7aY8g

Joe Biden has never called on a single Democrat leader to stop the violence in their states or cities#Debates2020 pic.twitter.com/9oqYTB8ZfO

Chris Wallace: "Have you ever had the Demcoeratic mayor of Portland or the Democratic governor of Oregon and said, 'Hey you've got to stop this… Stop the days and months of violence in Portland'?"

"The people of this country want and demand law and order and you are afraid to even say it," Pres. Trump says to Joe Biden, when asked by moderator Chris Wallace on why Americans should trust him on the issue of race. #Debates2020 https://t.co/sSZdfEIiT0 pic.twitter.com/qzgAb9eN1d

Joe Biden thinks his son "did nothing wrong at Burisma," the corrupt Ukrainian gas company that gave him boatloads of cash.

President @realDonaldTrump: Why is Hunter Biden getting $3.5 million from the Mayor of Moscow's wife?#Debates2020 pic.twitter.com/cvuDBWAUPx

President Trump: “It was the tax laws. I don’t want to pay tax. Before I came here I was a private developer. I was a private business people. Like every other private person, unless they’re stupid, they go through the laws.” #Debates2020 pic.twitter.com/RUL18mQBCo

President @realDonaldTrump calls out Joe Biden for his position on the travel ban on China pic.twitter.com/aH4hhYDdAk

Biden refuses to answer Chris Wallace's question that, in so many words, wondered whether he and running mate Kamala Harris are being anti-vaxxers and purposefully dragging down American trust in a potential COVID vaccine. #Debates2020 pic.twitter.com/wL8xsEkozn

Asked why each should be trusted to handle the COVID-19 crisis, Biden criticizes Trump for downplaying the pandemic: “The president has no plan.”

President @realDonaldTrump: Joe Biden wants to shut down the country, I want to keep it open#Debates2020 pic.twitter.com/3EDXGIuzcS

Joe Biden refuses to answer questions on whether or not he would pack the Supreme Court#Debates2020 pic.twitter.com/FiOQxlg4PL

President Trump: “Your party wants to go Socialist… and they’re going to dominate you, Joe. You know that.”

Joe Biden: “I am the Democratic Party right now.”

Biden Not Opposed to Barrett??

The debate just started and Biden said he doesn’t oppose ACB for SCOTUS.

Biden says he's not opposed to Amy Coney Barrett. I don't think he knows what he's saying but we should still quote him on this. #Debates2020

Biden called Amy Coney Barrett “the Justice” and I like the sound of that.

President Trump and former Vice President Biden take the stage at the first presidential debate. The candidates are foregoing the traditional handshake due to COVID-19. https://t.co/5Bl4Ob3O2t #Debates2020 pic.twitter.com/DU6F0f1snf

Mail voting: The rule is that ballots must be postmarked before the close of the polls on election day. Period. In most places the post offices close their “public window” at around 5pm, local. Mail ballots should be in the POST OFFICE, not the corner mailbox, on the Monday before, if they will bear the proper postmark.

I can drop my various payments into the mail, usually the drive-by box outside the PO and 3 days later the recipient half a continent away is thanking me for my payment. Its been that way for years.

So. Any ballot received after close-of-business at the election office is not counted. Right into the shredder. If a person is not interested enough in voting to make sure their ballot gets counted, they don’t deserve to vote.

2) Biden, held up well, physically. But, he was also obviously scripted. He seemed to have a real problem with responding off script. And, he resorted to personal name calling.

3) We still have NO idea what Biden’s position on anything is.

4} Trump did an adequate job of defending his record. But, it was impossible for him to put forward any of his future vision, in any detail, when he had to spend so much time rebutting Biden’s unsupported claims.

It was like watching an UFC fight. No knockout. Each candidate’s supporters will see a win for their man. But, the results were mixed.

1. Wallace wasn’t 100% in the tank for Biden but the phrasing of some questions revealed his bias. He did try, unsuccessfully to disguise it, so points for that.

2. Biden was ok when he was needling Trump or regurgitate talking points. Many times he went off the rails a bit.

3. After Biden’s display tonight I don’t want to hear about Trump and ‘the dignity of the office’ or ‘respect for norms’ to the end of time.

4. Trump visibly restrained himself from punching Biden, at least to me, so that’s a win for Trump on that point. He didn’t let Biden’s prattling get to him after that early moment.

5. Trump had much better, funnier one line zingers when interrupting Biden. Biden came across as a condescending ahole, IMO.

Joe loses here because the suburban moms that the Dems so much want to get to vote for them are SICK of the racial diversity mantra, the identity politics.