“In the latter role, I am getting ready to teach @JoeBiden a lesson he will never forget. He falsely accused a 17-year old boy & prejudiced Kyle’s legal rights.” 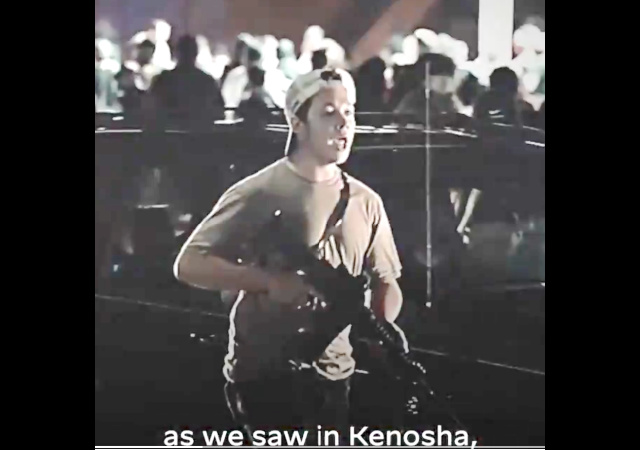 Lin Wood, the attorney for Kyle Rittenhouse, demanded Joe Biden’s campaign retract an ad that has a false accusation against his client.

Then Wood announced that he will sue Biden and the campaign on behalf of his client for libel.

Rittenhouse traveled from his home in Antioch, IL, to Kenosha, WI, in August to help protect businesses from looters and mobs.

He allegedly shot three men. Two of those men died and the third suffered serious injuries.

The attorneys claim Rittenhouse acted in self-defense. Fuzzy wrote on August 28 that The New York Times’ reconstruction of that night makes a case for the defense strategy.

Biden wrote, “There’s no other way to put it: the President of the United States refused to disavow white supremacists on the debate stage last night.”

I refuted that claim earlier today. But I digress.

There’s no other way to put it: the President of the United States refused to disavow white supremacists on the debate stage last night. pic.twitter.com/Q3VZTW1vUV

Wood responded that the attorneys started preparing a formal demand for a public retraction from the Biden/Harris campaign.

Wood also demanded that Biden “immediately retract his false accusation that Kyle is a white supremacist & militia member responsible for violence in Kenosha.”

Formal demand for public retraction is being prepared for Biden/Harris Campaign on behalf of Kyle Rittenhouse.

I also hereby demand that @JoeBiden immediately retract his false accusation that Kyle is a white supremacist & militia member responsible for violence in Kenosha. pic.twitter.com/GrZyE8nI7Z

Joe Biden @JoeBiden medications have worn off. Once again, he confuses cities.

Kyle went to Kenosha, WIsconsin to render medical aid as a trained ENT, not Portland, Oregon.

The only thing that saves Chris Wallace is that he did not use Kyle’s name or likeness. @JoeBiden & his campaign recklessly did.

Meets the “of and concerning” requirement of libel law.

Joe is going to be sued.

On behalf of Kyle Rittenhouse, I shall sue @JoeBiden & Biden/Harris Campaign for libel.

I am partisan in 20/20 supporting @realDonaldTrump.

I am non-partisan trial lawyer who aggressively pursues truth to achieve justice.

Put in your hearing aid, Joe. You will hear footsteps.

When I take @JoeBiden deposition on cross-examination, no wire or computer contact lenses will save him.

I will rip Joe into shreds. Ask witnesses who have had the misfortune of sitting across the table from me under oath.

You don’t mess with my children, my pup, or my clients.

I enjoy conversations on Twitter. I get to be a writer.

But for 43 years, I have loved the law & being a trial lawyer.

In the latter role, I am getting ready to teach @JoeBiden a lesson he will never forget. He falsely accused a 17-year old boy & prejudiced Kyle’s legal rights. https://t.co/UY17YHfHin

Marina Medvin, another attorney on Rittenhouse’s team, tweeted out her response as well.

“There is no evidence of him being a ‘white supremacist,'” she wrote. “This dangerous storyline was concocted by online trolls and then promoted by mindless politicians and pundits. The flagrant defamation needs to stop. They can retract and apologize, or they can deal with Lin Wood in court. It’s their choice.”

The thread includes screenshots of videos showing Rittenhouse saying he had his medical kit so he could help anyone who had injuries.

Response to Joe Biden's defamatory allegation that my client Kyle Rittenhouse is a "white supremacist" — pic.twitter.com/m2QUJ25rAt

Deliberately defaming a 17 year old boy without even a pinch of evidence to support the derogation is plainly cold-hearted and callous. https://t.co/SWIKLHiPrc

Aside from the shameless defamation of a 17 year old boy (I guess he’s too old to just be sniffed) why is Biden deliberately interfering with Kyle’s right to a fair trial, with his right to due process of law? How dare Biden try to poison a jury pool for personal political gain! pic.twitter.com/vHl4wXh86T

We need lawsuits and/or criminal conspiracy charges against all civil right violations by those who do not support people using their Constitution Rights.