“The Senate should ignore the extremists, stick to precedent, and confirm the nominee.” 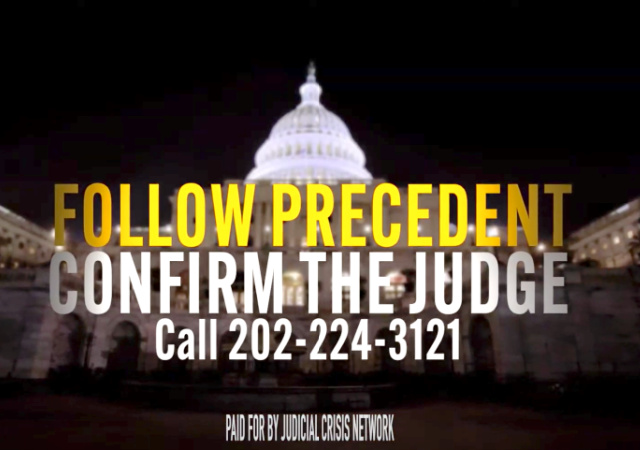 “President Trump will soon pick a strong nominee, and the Senate should act quickly to confirm her. Justice Ginsburg was confirmed in 42 days. Justice O’Connor in 33. They both received overwhelming bipartisan support. There is no reason Judge Amy Coney Barrett or Judge Barbara Lagoa could not be confirmed before the election. In fact, 8 out of 10 nominations made during an election year have been confirmed when the Senate and the White House are held by the same party. Why won’t Democrats support Barrett or Lagoa, like they did O’Connor and Ginsburg? Because the Democrats are extremists, which is why they are already threatening to pack the Court and destroy the Senate if a nominee is confirmed. The Senate should ignore the extremists, stick to precedent, and confirm the nominee.”

Here is the text of the video:

You’ll hear noise from extremists about the Supreme Court vacancy.
Here are the facts: Justice Ginsburg was confirmed in forty-two days.
Only three Senators voted against her.
Justice O’Connor was confirmed in thirty-three days.
It was unanimous.
In eight out of ten vacancies like this, the nominee was confirmed.
Democrats are shamefully trying to change the facts.
Tell the Senate, when the President announces another strong nominee.
Follow precedent. Confirm the Judge.

There is no doubt that both sides will use Ginsburg’s death as we close in on election day. Polls have shown SCOTUS is a top priority for voters.

The ad will go out on TV, digital, and “nationally on cable and in key states including: Colorado, Iowa, Maine, North Carolina, Utah, and Washington D.C.”

Collins already sided with the Democrats, saying the November winner should nominate the next justice.

Tillis said he will support “the well-qualified and conservative jurist President Trump will nominate.”

The Democrats immediately went after Trump when Ginsburg died, trying to use McConnell’s actions in 2016.

However, that was when President Barack Obama, a Democrat, was president while the Republicans held the Senate.

When democrats are in power, they target law enforcement agencies they don’t like by parachuting battalions of DoJ lawyers into that jurisdiction and putting the agency under a consent decree. This is usually done under the catagory of civil rights violations by the agency. When a jurisdiction doesn’t adequately police these riots to the best of their ability/capabilities, the non-rioter citizen’s civil rights (and every other right) are violated. There is no longer equal protection under the law in many of these big blue jurisdictions, so seeing the DoJ telegraphing some future action gives me some hope.

Some cynics and concern trolls here consistently bash Barr, but I believe he is on , rolling up the antifa networks like a ball of yarn, over 300 arrested on federal charges last numbers I saw.

He and Trump are bringing them hell.

As British commandos in WWII liked to say “Not hurt, eh? Just wait til you shake your head”

Molly Hemingway and Carrie Severino’s book – Justice on Trial – on the Kavanaugh fight is really good.

Here’s a nicely written and relatively brief discussion about the statutory and political history, and the all-important, public-based belief in the Supreme Court’s integrity — institutionally and w/r/t the individual justices themselves — and how these came to crystalize toward today’s belief that the number of Supreme Court seats should best stay at 9 — at least for now, given the number of Circuit Courts of Appeal in operation.

The Dem’s itch every so often to pack the Court is examined.

Amid all that interesting discussion, and the obvious partisan leverage aside, the piece answers our fundamental question directly: why not pack it, even more and more as both time passes and the entire federal judiciary might expand?

Sorry guys; TheORangeGrush ain’t a lame duck until *after* the election. Maybe The Dowager Empress of Chappaqua would have actually been queen if she hadn’t decided she already was before the voting, when she accepted the nomination, two election cycles prior, when Slick Willie got elected, when she worked with Alynski, at her College graduation …

Let’s have a look at lame duck things various presidents have done. Absconding with White House furniture, and pulling the “W” keys off the keyboards is small beans. Pardons? Appointments? Shipping out planes full of cash on the DL? Executive orders, findings, memos, and similar exercises of pen and phone?

President Trump is gonna nominatea justice during his term, which will go to the Senate that expanded it’s same-party majority during the midterm.

Their problem, in the end, is those deplorables keep voting wrong.

The peasants are revolting!