The Xtreme Manufacturing event shows that the Trump Rallies are back, and as popular as ever. 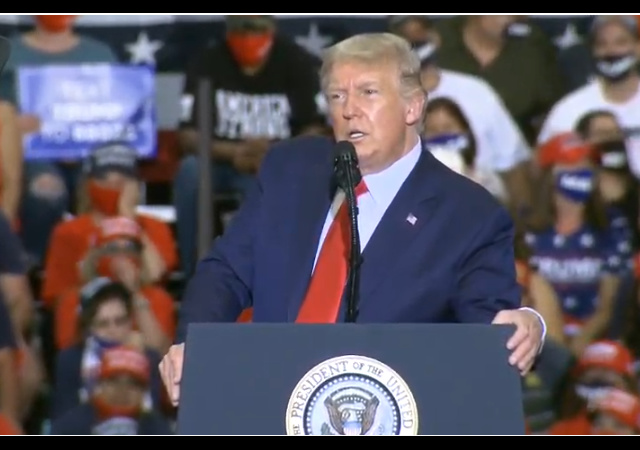 President Donald Trump was in Nevada for several campaign events this weekend, including an indoor rally at Xtreme Manufacturing in Henderson.

Even though all Americans are fully aware of the hazards associated with the Wuhan Coronavirus, and have seen “peaceful protesters” ignore all social distancing rules, the city in which the manufacturing company operated issued a warning to try and stop the rally.

Xtreme Manufacturing ignored the warning and held the event. The city subsequently fined the firm $3000.

The City of Henderson has fined the company that hosted President Donald Trump’s campaign rally Sunday evening $3,000 for multiple violations of the state’s emergency coronavirus directive.

Spokeswoman Kathleen Richards, in a statement on Monday, said that a city compliance officer observed six violations of state directives during the rally at the Xtreme Manufacturing warehouse in Henderson and that the city’s Business Operations Division has issued a business license notice of violation, in addition to the $3,000 fine. Xtreme Manufacturing has 30 calendar days to respond to the notice and pay the penalty or dispute it.

The city notified Xtreme Manufacturing on Friday that the planned event was in violation of the state’s 50-person limit on public gatherings. About 5,600 people attended the indoor rally, according to the Henderson Fire Department, with the vast majority of them not wearing masks.

Representatives of the Trump campaign defended the decision to hold the indoor event and indicated it had a sensible pandemic protocol in place.

“If you can join tens of thousands of people protesting in the streets, gamble in a casino, or burn down small businesses in riots, you can gather peacefully under the 1st Amendment to hear from the President of the United States,” Trump campaign spokesman Tim Murtaugh told reporters.

Campaign officials added that all attendees would be provided masks and “encouraged” to wear them. All guests would also be subject to temperature screenings, according to the campaign.

The campaign faced criticism from some on social media over the event, which comes as Nevada has seen its numbers of new COVID-19 cases per day drop in recent weeks, though the state is still reporting more than 100 new cases per day.

The company is now being doxxed.

Here’s some phone numbers of the Henderson company, #XtremeMfg that is allowing Trump to violate the state orders for #COVID. I put a check mark next to the person in charge of marketing and media. 😊👍#TrumpRally #COVIDIOTS #CovidiotInChief #RemoveTrumpNow #COVID19 #pandemic pic.twitter.com/1ZK5Jy175f

Many in the media were less than happy that the Trump rallies are back….

CNN and Other Networks to Boycott Trump Rally in Henderson, Nevada: Report https://t.co/fVlrPKtKj2 via @gatewaypundit

….and as popular as ever!

A look at the crowd at the Trump rally tonight at Xtreme Manufacturing in Henderson, NV#TrumpRally #Nevada #Trump2020LandslideVictory #MAGA #KAG pic.twitter.com/sqS6N459HB

Now, why would the Democratic governor of Nevada and the elite media be unhappy with this event? Biden’s light campaign schedule may be a clue.

Yes, this campaign is occurring during a serious pandemic, and Biden and his team have particular reason to worry about an almost-78-year-old man interacting with a lot of people. This means Biden won’t hold the traditional big rallies, and will have to make do with smaller, socially distanced events. Yes, Biden is ahead in most polling, thus he and his campaign may feel he doesn’t need to attend a lot of events.
16

But this is a really light schedule for the first week of September in a presidential campaign. In a five-day stretch back in 2016, while battling what was later diagnosed as walking pneumonia, Hillary Clinton attended rallies and events in Cleveland, Ohio; Hampton, Ill.; Tampa, Fla., New York City, Charlotte, N.C., Kansas City, Mo., and then New York City again.

Though it would cost more than $3000- they should take the fine to court. Seems judges are getting a little concerned that restrictions on gatherings are violating the Constitution.

Xtreme Manufacturing makes bullets. I buy all my bullets for reloading from them. They’re Xcellent!

Time for you reloaders out there to engage in a buycott!

Pocket change, ok, but it’s worth fighting it in court. Matter of principle.

“Biden is ahead in most polling, thus he and his campaign may feel he doesn’t need to attend a lot of events.
16”

Just to be clear: this is the same polling that said Hillary was going to win in a landslide last time right?

Good luck with that.

The business owner should write the check, wipe his azz with it and them mail it directly to the attention of the governor himself.