Andrew Sullivan: “I’ve never seen Biden seem so old or so weak. He can’t land a strong blow. He’s being successfully heckled. I want to look away.” 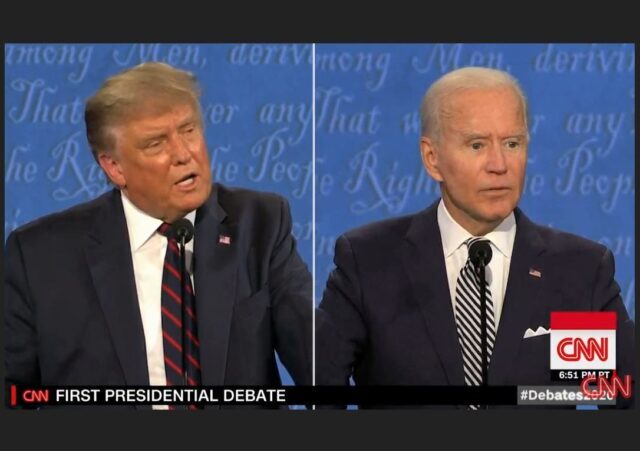 What a s–tshow. Chris Wallace was horrible, at times literally arguing with Trump, and continually reprimanding Trump for interrupting when interruptions were bipartisan during the debate — Biden did it continually.

Trump did very well on law and order. Just when Biden had a potentially deadly moment of debate silence when Trump pressed him to name a single law enforcement group that supported Biden, and Biden had no answer, Wallace saved him by changing the subject.

I don’t think Trump won people over, but I could see Biden’s image as the supposed nice guy being damaged.

Biden tells Trump to “shut up” and to “keep yapping.” pic.twitter.com/wfaVkvuM23

I value Andrew Sullivan’s view on this because he hates Trump and supports Biden, but he’s willing to speak some truth on this. He thought Biden did horribly:

I’ve never seen Biden seem so old or so weak. He can’t land a strong blow. He’s being successfully heckled. I want to look away.

Maybe that’s the only takeaway, that Biden came across as weak. It’s one I’m seeing from a lot of lefties on Twitter.

Update: I just switched to MSNBC and CNN, and they seem to agree with Sullivan that Trump dominated (of course, that means Orange Man Bad to them):

Yes, Trump did indeed interrupt Biden repeatedly when we would have liked to see him sit back while Joe dug himself into a hole. Joe digs lots of holes when nobody gets in his way.

That would have been a good debate tactic, perhaps even an elegant one.

But this was not a debate in any useful sense. This was a joust, a show of force. In one corner, PDJT; in the other, Wallace/Biden. Which side was going to dominate the other? That’s what the spectators were there to see. The show was not about presenting carefully crafted arguments backed up with sensible conjecture and verifiable fact. Any attempt to develop such a thing would collapse immediately under “spoiler” attacks, sniping and unsupported innuendo.

Standing back while Biden self-destructs is the sort of thing we might see of a GW Bush or maybe a Romney. But we all know that’s not the way to defeat Dems. Something a bit more active is needed. The Dems can do terrible damage even if they’re standing in a big hole of lies and illogic, one they themselves dug, and beating them will require far more than watching them make fools of themselves.

We don’t need Biden to look like a doddering old fool; we need him to be crushed. Miss Manners wouldn’t be able to it.

“But this was not a debate in any useful sense.”

Way too many people fail to understand this. If we had a truly neutral moderator with tough questions for both sides we *might* get something resembling a debate.

We don’t have that and Trump knows it. He came out firing from word one, the right approach IMO.

I watched the whole thing, and I think the biggest danger here is that Trump thinks he won it (he’s tweeted this). If he really thinks this performance was stellar . .. ugh.

His worst moments stemmed from Chris Wallace, who most of knew was going to be all-in for Biden. I didn’t see him being all-in for the radical left, though, so that was a surprise. I mean spit polishing critical race theory (a Marxist, black supremacist, anti-America ideology) as “racial sensitivity training” was a bridge too far for me.

I doubt very much that Trump LOST voters, but I am equally sure he didn’t gain any, either. That’s not good in a race that is going to be far too close for comfort.

Hopefully, Trump is not sitting around thinking that was enough and that he’s good going into the next debate. Because it wasn’t and he’s not.

Trump accomplished exactly what he wanted.

And the marxists are all freaking out as they lose they’re reliable black male base and the male hispanic vote.

Stick a fork in the progs, they’re done.

The polling, for what it is worth, shows Trump picked up after the debate: