“The footnote states Christopher Steele’s Primary Sub-source ‘was the subject of an FBI counterintelligence investigation from 2009 to 2011 that assessed his/her documented contacts with suspected Russian intelligence officers.'” 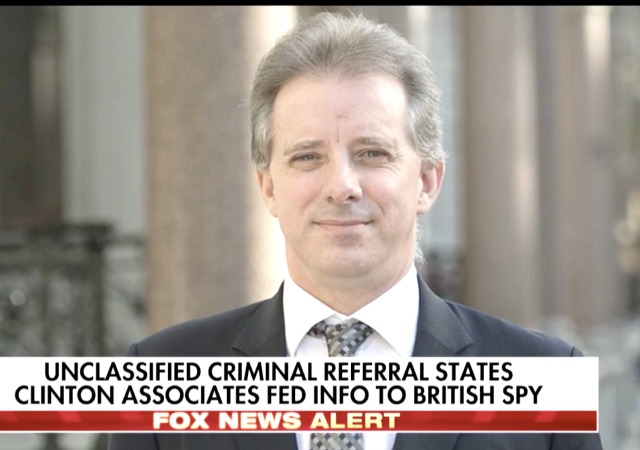 The primary sub-source to Christopher Steele’s infamous 2016 dossier against then-candidate Donald Trump was known to the FBI as far back as 2009 as a possible “threat to national security.”

The FBI also suspected the source was a Russian agent.

From the Senate Judiciary Committee:

Senate Judiciary Committee Chairman Lindsey Graham (R-South Carolina) today released a letter from Attorney General William Barr and a declassified summary from the Federal Bureau of Investigation (FBI) that indicate Christopher Steele’s Primary Sub-source was a likely Russian agent and had previously been the subject of an FBI counterintelligence investigation.

In response to Graham’s request for oversight of the reliability of the Steele dossier, the Justice Department recently declassified a key footnote in Inspector General Horowitz’s report. The footnote states Christopher Steele’s Primary Sub-source “was the subject of an FBI counterintelligence investigation from 2009 to 2011 that assessed his/her documented contacts with suspected Russian intelligence officers.”

Barr appointed U.S. Attorney John Durham to lead an investigation into the origins of the Russian collusion case against President Donald Trump and his campaign.

He told Graham that releasing this information would not compromise the investigation.

These are the main points from the declassified summary (their emphasis:

In 2009, the FBI had “an active counterintelligence investigation of this individual” because agents suspected the person “of being a Russian agent.” It revealed:

That FBI investigation revealed the Primary Sub-source was suspected of providing information to the Russian Embassy and was in contact with known Russian intelligence officers, and made offers to people connected to incoming Obama Administration officials that any classified information they provided could be paid for. In addition, during this investigation it was disclosed that the Primary Sub-source persistently asked individuals about a particular military vessel of the United States.

Investigators found through their investigation of this source that the person “was not anti-American but wanted to return to Russia one day.” Another person described the source “as pro-Russia and indicated that he/she always interjected Russian opinions during policy discussions.”

The Crossfire Hurricane team identified this source in December 2016. The members “became familiar with the 2009 investigation.” Despite this, they interviewed the course “over the course of three sequential days in January 2017.”

But at that time the 2009 investigation was closed and it is still closed:

A declassified summary of interviews with this source came out over the summer. The source told the FBI in January and March 2017 “the information contained in the anti-Trump dossier was unreliable.”

The source’s information “that served as the basis of the dossier was ‘second and third-hand information and rumors at best.'”

The document released over the summer showed the “FBI was on notice of the dossier’s credibility problem, yet continued to seek further FISA warrants renewals for Page.”

The source was shocked over the dossier, too:

The document also revealed that Steele’s primary sub-source “disagreed with and was surprised by” how information he gave Steele was then conveyed by Steele in the dossier.

Department of Justice Inspector General Michael Horowitz released his report on the origins of the Russia investigation late last year.

The IG found justification to investigate the Russia investigation and did not find any “intentional misconduct or political bias.” However, the investigators discovered many “significant” errors concerning the FISA warrant on former Trump campaign adviser Carter Page.

I try to become more cynical every day, but lately, I just can’t keep up.

The left loves their October surprises. hunter biden alone could give us one a day for the entire month, but that’s just a sideshow compared to what will be revealed with spygate. Many on the left don’t care and will never accept that obama was and is an absolute criminal. Many on the right have known it all along or for awhile now (I know some have lost patience). It’s the ones in the middle, those who are sane and can see the truth when presented that need to be shown and convinced in order for us to move forward. “We caught them all, let’s just see what happens.” Yesterday’s fbi text dump was the green flag. The line of departure. We’ve crossed the Rubicon, it’s all coming out.

There will never be wisd spread indictments or even indictments of high ranking officials involved in Spygate. The reason, there are simply far too many highly influential swamp dwellers, both Democrat and Republican involved.

Back in late 2017, the Establishment split into two factions. One was wholly Democrat and Globalist and was vehemently Get Trump at all costs. The other was more moderate, largely Republican and was more interested in securing the future of the nation. It was not interested in burning down the entire house to get rid of a political mouse. Barr was brought in to protect the house and bring subtle pressure to bear on the Get Trump faction to back off. So far, he has failed. The Epstein arrest was the first hhigh profile public action to bring such pressure to bear and it failed spectacularly. The Maxwell arrest continues that road, and is seemingly not producing any results either, as the political class has lost control of the radical anarchists. The decision to support Flynn’s request for a dismissal was an attempt to preclude a Trump pardon of Flynn, which would have opened the floodgates on the coup attempt. Barr is continuing pressure by slowly releasing evidence of wrong doing in the Spygate coup. It is being done in such a way as to avoid triggering a huge backlash against those involved by the public. It is all aimed at influencing the Get Trump faction. It will not work, however.

This is all smoke and mirrors and will amount to nothing in the long run.

Just don’t forget in all the BS being spread about:

The FBI and DOJ and spy agencies ALL knew the russian collusion was a hoax.

They were attempting a coup. They should rightly all hang by their necks until dead, or take a bullet to the head.