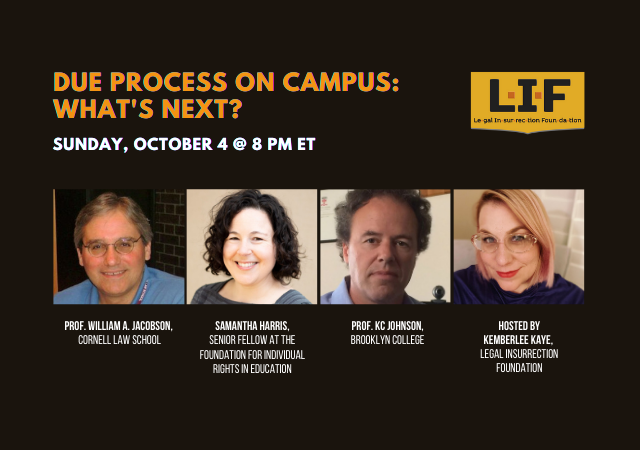 The Legal Insurrection Foundation is excited to announce our next (and last panel for a least until after the election) virtual panel — Due Process on Campus: What’s Next?

In this installation, we’re thrilled to host Professor KC Johnson, whose coverage of the Duke Lacrosse case was legendary. Joining him is Samantha Harris, Esq. who is of counsel to the firm of Mudrick & Zucker and is also a Senior Fellow at the Foundation for Individual Rights in Education. Legal Insurrection’s Professor Jacobson will join the panel and I’ll be hosting.

This will be a closed event and pre-registration is required. Log-in information will be sent via email to all registrants prior to the event. The event is sponsored by the Legal Insurrection Foundation and attendance is free of charge.

More about the event:

Join Professors William Jacobson and KC Johnson, and Samantha Harris, of counsel to the firm of Mudrick & Zucker and Senior Fellow of the Foundation for Individual Rights in Education (FIRE), for a riveting and lively discussion on the current state and future of due process in higher education, hosted by the Legal Insurrection Foundation’s Kemberlee Kaye.

The lack of due process in the campus disciplinary process, particularly for males accused of sexual harassment or assault, has generated increasing attention and lawsuits. There have been significant court rulings in the past year, plus regulatory reform from the U.S. Department of Education, which have changed the legal landscape. In this panel discussion, we will discuss the current state of the law, and what can be expect depending on election result.

William A. Jacobson is a Clinical Professor of Law and Director of the Securities Law Clinic at Cornell Law School. He is a 1981 graduate of Hamilton College and a 1984 graduate of Harvard Law School. Prior to joining the Cornell law faculty in 2007, Professor Jacobson practiced law in New York City (1985-1993) and Providence, Rhode Island (1994-2006), A more complete listing of Professor Jacobson’s professional background is available at the Cornell Law School website.

Professor Jacobson was the founder of Legal Insurrection website in 2008.

KC Johnson is a professor of history at Brooklyn College and the CUNY Graduate Center. His blog, Durham-in-Wonderland, explored the myriad legal, academic, and media scandals associated with the Duke lacrosse case, about which he also co-authored a book with Stuart Taylor. Johnson also co-authored (with Taylor) a 2017 book on on Title IX policy and (with Samantha Harris) a 2019 law review article on Title IX litigation patterns.

Samantha Harris is a Senior Fellow at the Foundation for Individual Rights in Education and is of counsel to the firm of Mudrick & Zucker, where she concentrates her practice in the areas of campus discipline, Title IX, and free speech. For more than 15 years, she has advised students, faculty, administrators, and attorneys on issues of free speech and due process on campus. She lectures regularly about students’ rights at campuses and conferences around the country, including at the Judicial Conferences of the Third and Fourth Circuits. Ms. Harris has been published in Inside Higher Ed, the New York Daily News, Reason, The Washington Post, Vox, and other publications, and has represented FIRE on ESPN, Fox News, NPR, and more.

Ms. Harris received her undergraduate degree in Politics from Princeton University in 1999, and went on to earn her J.D. from the University of Pennsylvania Law School in 2002. She completed a judicial clerkship with the late Judge Jay C. Waldman of the U.S. District Court for the Eastern District of Pennsylvania.

Kemberlee Kaye has a background working in immigration law, and as a grassroots organizer, digital media strategist, campaign lackey, and muckraker. Over the years Kemberlee has worked with FreedomWorks, Americans for Prosperity, James O’Keefe’s Project Veritas, and Senator John Cornyn’s campaign, among others. Kemberlee is the Senior Contributing Editor of Legal Insurrection website, where she has worked since 2014.

Kemberlee, her husband, their daughters, and their son live a lovely taco-filled life in her native Houston, Texas.

Due process? Civil rights is a novel concept in the Age of Progress. That said, #HateLovesAbortion

Better yet….meet in a free State. Such as South Dakota. Aunty Noem’s Cabin.

When the world opens back up, we plan to resume our Reader Receptions.

1
notamemberofanyorganizedpolicital in reply to puhiawa. | September 24, 2020 at 5:32 pm

Why you could even meet in that backward state of Arkansas.

They never locked up.

Harvard Survey: Only 7% Of Incoming Students Identify As Conservative

The Amish today just held a horse and buggy Trump parade today. I am not kidding. This may be the first time in 200 years they have come out in public for a candidate. That is how serious the Amish take this.