Cornell Faculty Coalition: “every ‘colorblind’ event, mechanism, and process at the university — from new faculty orientations to selection of endowed positions — perpetuates racial disparities and reinforces an unjust status quo.” 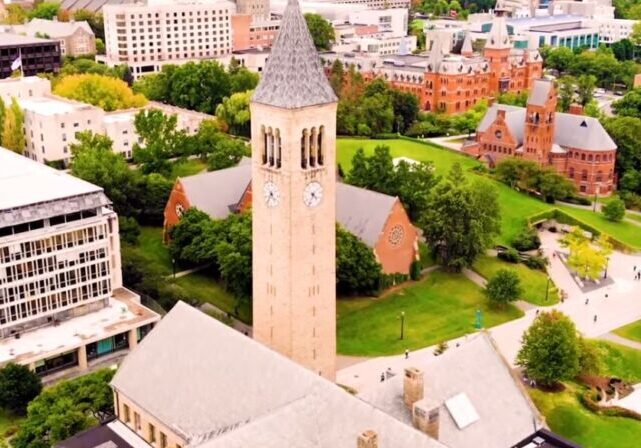 Antiracism does not mean non-racist. It is a term of art used, most famously, in the book How to Be An Antiracist, which is being used as a teaching tool at universities throughout the country, including Cornell, and forms the ideological framework upon which the university is moving forward.

In “antiracist” lingo, being merely not racist is racist. There are only two alternatives, racist or antiracist, and race-neutrality is deemed racist. Advocating colorblind policies and the treatment of people without regard to race is considered racist in this formula.

Discrimination based on race is at the heart How to Be An Antiracist:

We covered these events in July 2020, Cornell University takes a major step towards compulsory racial activism for faculty, students, and staff:

Both of these trends — the obsessive focus on race and the requirement of activism — have come together in an announcement by Cornell President Pollack, in an all-campus email this afternoon. The email announced a deepening of race-focused education on campus and proposed mandatory participation by faculty and students [and staff].

You can read President Pollak’s July announcement here. On September 4, 2020, President Pollak reiterated the campus focus on “antiracism” as a top priority, and announced progress on various intitiatives, including faculty, student, and staff requirements (underscoring added):

Under the leadership of Dean of the Faculty Charlie Van Loan and Associate Dean of Faculty Neema Kudva, the Faculty Senate is developing frameworks for three of the announced faculty-led initiatives: the creation of a center that will promote research and teaching in matters that relate to systemic racism, colonialism, bias and inequity, a required educational program for faculty, and a for-credit educational requirement for all Cornell students that covers the same. The Senate has met with students from DoBetterCornell to become better informed about their goals for these programs. Now that the semester has begun, conversations with faculty have started and committees will be formed for each initiative over the next few weeks with significant opportunities for one-on-one interactions among faculty, under the auspices of the Senate.

A required training course for Cornell staff on equity and cultural competency will be available this month. The course, “Advancing Diversity, Equity and Inclusion at Cornell,” will consist of six modules, each with a required online component and voluntary community chats to deepen engagement with the material. The first module will be available mid-month through CULearn. Subsequent modules will be released monthly, and all required components must be completed by every staff member by September 2021. Furthermore, in response to a forum for staff of color on issues of concern to the BIPOC staff community hosted by the Men of Color and Women of Color Colleague Network Groups, three subcommittees were formed to focus on high-priority issues of work-life and wellness needs, the employment life cycle and elevating the voices and successes of staff of color. The subcommittees will be meeting regularly, with the first meeting this month.

These requirements for faculty and students also are making their way through the University Faculty Senate, though the results have not been finalized and voted upon yet.

In a significant move, a “Faculty Coalition” has just published a list of race-based demands that would implement race-based requirements in almost all aspects of the university hiring, promotion, and curriculum, and the elimination of race-neutral policies. The list of Demands was published on September 7, 2020, at Medium, published by a group called the Cornell Faculty Coalition.

What we demand of Cornell is substantive action rather than the performance of racial innocence or enlightenment. “Black Lives Matter” is a call not just for reflection or dialogue, but for genuine reallocation of resources and power. If the suddenly-popular term “anti-racism” is to mean anything at all, it must mean redistributive justice and the dismantling of white supremacist norms and conditions. It must also mean serious intellectual and policy work over the long term. As an institution Cornell aspires to the highest principles of civic duty. Yet every “colorblind” event, mechanism, and process at the university — from new faculty orientations to selection of endowed positions — perpetuates racial disparities and reinforces an unjust status quo.

The long list of demands include, among other things, the following “Immediate Demands”:

IM1: Support and encourage Departments to make cluster hires of Black and other faculty of color….

IM2: Encourage and support the recruiting of graduate students of color in clusters and cohorts in departments….

IM3: Create benchmarks for departments to follow through on President Pollack’s call, issued earlier this summer, to “embed anti-racism” in the full spectrum of Cornell activities. As Pollack noted, “At the core of our institution lies our primary mission to provide an exceptional education, cutting-edge research and public engagement to shape our world for generations to come, and we must embed anti-racism across these activities.” Pollack further called for,

A systematic review of the curriculum in each of our colleges and schools to ensure that courses reflect, represent and include the contributions of all people. Several colleges/schools and departments already have this work underway. (“Additional actions to create a more just and equitable Cornell” July 16, 2020)

We need an action plan from departments and the Faculty Senate about how this process is to be implemented. (We propose additional considerations in “Curriculum” below.)

IM4: Pair anti-sexist and anti-racist policies to address white and/or male domination of department chair positions and other administrative structures….

With regard to curriculum, they demand:

IM7. Embed decolonized readings in every possible course at Cornell, including but not necessarily limited to the social sciences and humanities. Such curricular offerings must go beyond diffuse and vague “diversity” course requirements, such as the social difference requirement in the College of Arts and Sciences.

Among the demands with regard to faculty, they demand elimination of colorblind recruitment:

The list goes on and on and on. There is almost no aspect of campus in which race-neutrality would not be eliminated

Of interest, the group includes in the long list a demand to end the Cornell Partnership with Israel’s Technion:

LT23. Set benchmarks for addressing Cornell Tech’s involvement in the gentrification of Queens and, through its institutional partnership with Technion Israeli Institute of Technology, the military occupation of Palestine.

This is consistent with the tactic of one of the five original signatories to the Demands, Professor Russell Rickford, who consistently tries to hijack race-based issues and turn them against Israel.

Expect the list of signatories to rise. Race-based discrimination is fully embedded in the ethos of Cornell University, in the name of antiracism.

As predicted, the list of signatories has grown substantially, It’s worth noting that five of my colleagues who signed a letter falsely accusing me of supporting racism for criticising Black Lives Matter, have signed the Demand letter explicitly calling for race-based hiring and promotion, a blatantly illegal and racist objective. I wonder if they will be denounced by the Dean also?

I have read Cornell’s current policies with respect to faculty retention, and they are well-written and make sense: http://theuniversityfaculty.cornell.edu/the-new-faculty-handbook/read-me/tenure-and-promotion-to-the-rank-of-professor/ In brief, they are cast a wide net, have the department chair give an evaluation at 3 years, and then have a very tough comprehensive review at 6 years with less than half the faculty getting tenure upon a showing of “excellence.”

There are two problems: 1) the COVID pandemic has hurt the productivity of faculty, and a reasonable person should consider giving an extension of time for tenure review of faculty whose teaching, research, speaking at conferences, etc. was significantly hindered by COVID. 2) Cornell has a %60 million per year faculty hiring budget earmarked for affirmative action hiring. As I understand it, after a department gives one of these faculty tenure, the funding for that faculty member shifts back to the traditional budget. So, the people on these budgets face a high bar to get promoted. I don’t understand what demand LT7 is intended to address, but if it gives BIPOC a higher chance of tenure at Cornell, it will generate many lawsuits and a loss of alumni giving support.

My Alma mater is the University of Michigan. I no longer say that with pride – at all. It is embarrassing because just as with EVERY other “highly acclaimed” liberal arts college – and many of the lesser – we now know that to graduate all you need is to parrot the liberal groupthink ideology and the more you victimize yourself, the easier your time is there. Actual academic scholarship is a JOKE. And with affirmative action – fought for, and lovingly established via the Supreme Court at my school – we also now know that admissions has been dumbed down. I will never give a dime to U of M. Ever. Nothing will change unless and until ther is a WHOLESALE revolt by ALL alumni from all generations refusing any further gifts. This is an all out war and they are winning because of the false pride that is still associated with a degree. How long will the game continue?