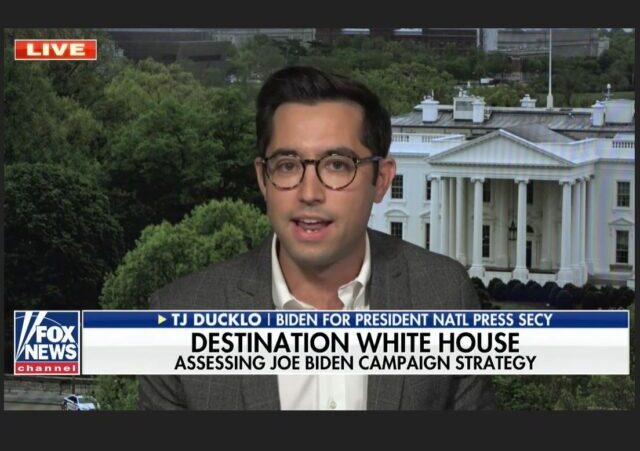 Joe Biden’s basement and highly-controlled press interviews have had slip-ups that certainly make it appear that Biden is reading from a teleprompter for the answers.

Here are are some examples:

Joe Biden motions to staff to change the teleprompter:

"Move it up here"

I think Joe is having a little trouble reading the teleprompter pic.twitter.com/Tk8f8CFqSX

So, does Joe read not only prearranged statements (we know he can do that) from the teleprompter, but also his answers to questions and his dialogue with people?

Bret Baier interviewed TJ Ducklo, Biden’s National Press Secretary. Before we get to substance, Ducklo comes across as a caricature of a smug political operative, the type of guy who is why Trump was elected in the first place.

Ducklo refused to answer a straighforward question about whether Biden ever has used a teleprompter during an interview. He ducked and changed the subject, and pretty much came across as the smug punk he apparently is.

Everyone has a Ducklo. The guy who makes everything at the office political. You really wanna see that guys smiling face morning after the election?

So I guess that answer is Yes.

Just to get you even more furious, here’s Ducklo refusing to say what Biden would have done differently with regard to the pandemic, and whether Biden supported the China travel ban.

DUCKY you don’t need to answer. Joe 30330 tipped his hand