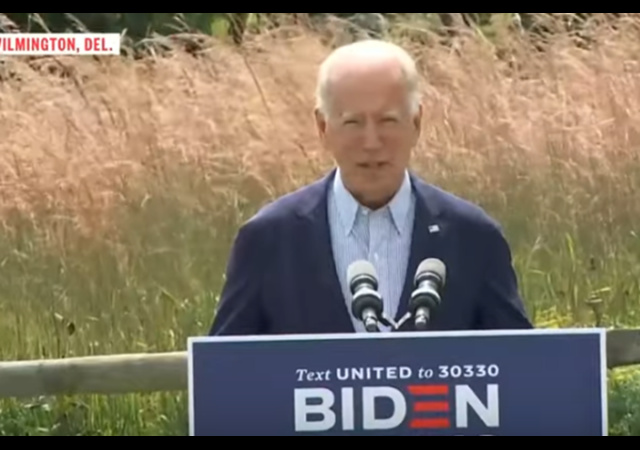 The Narrative Police have been put on high alert, and the tech giants are clearly attempting to minimize the contribution of arson in the West Coast Wildfires that are incinerating millions of acres of the US.

In fact, for the thought crime of posting specifically about one of the arson incidents (and not mentioning climate change in any fashion), my post was hit with a “Fake News” alert from the trolls and social justice goons at Facebook. 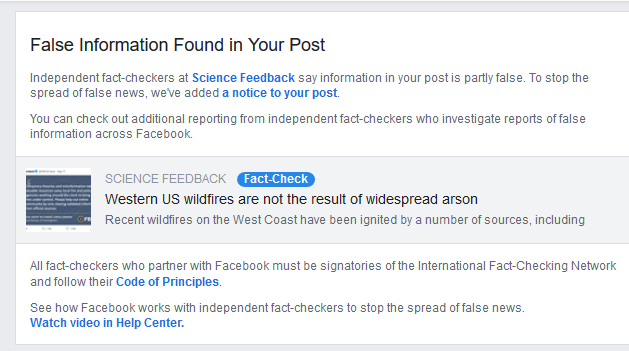 I assert that this type of stunt is engaging citizens in California, Oregon, and Washington by now permitting them to be fully informed of potential, significant hazards. Everyone in potential wildfire areas, especially in the suburbs, should be on high alert for strange activity, primarily if carried out in black-dressed youths carrying matches and Molotov cocktails.

Woman in Oregon caught someone on her property with matches and held him until police showed up. 🤔 pic.twitter.com/zefFthWPzI

Of course, arsonists come in all shapes and sizes like this suspect. He is under investigation for allegedly starting seven separate blazes in the Portland area.

A man arrested Sunday afternoon for allegedly starting a small brush fire along Interstate 205 was arrested again hours after he was released from jail after he allegedly started six more small fires, Portland police said.

Domingo Lopez Jr., 45, was cited with seven counts of reckless burning and police said other charges may follow. After he was arrested the second time, at 3:37 a.m. Monday, he was taken to a hospital for a mental health evaluation.

Interestingly, I believe people in the suburbs should become much more concerned about this issue. In his most recent appearance, in a cornfield to signify the importance of climate, Democratic presidential candidate Joe Biden pitched climate change to the suburbs while calling President Donald Trump “a climate arsonist.”

Democratic presidential nominee Joe Biden accused President Trump of being “a climate arsonist” and charged that if the president wins another four years in the White House, the wildfires raging across the western United States will become more “devastating and more deadly.”

Pointing to the wildfires, as well as this summer’s massive flooding and damaging hurricanes, the former vice president argued that “Trump’s climate denial may not have caused these fires and record floods and record hurricanes, but if he gets a second term, these hellish events will continue to become more common.”

Meanwhile, Antifa thugs are actually setting fires in our cities

Joe, maybe you should’ve focused on forest management for the last 47 years instead of banning plastic straws pic.twitter.com/DIKqMmwYB5

So we aren’t supposed to be worried about real arsonists, but we need to be concerned about Trump’s causing “climate arson.” I assert that this is proof the Democrats are desperate to get a message that will scare voters away from Trump, especially those in the suburbs who are concerned about the ongoing riots.

I will point out that the “science” of climate change is based on models. How have the models worked out for a much shorter term problem like the coronavirus worked out? Poorly.

“Climate dries the [wood] fuels out and extends the fire season from 4-6 months to nearly year-round but it’s not the cause of the intensity of the fires,” said US Forest Service scientist Malcolm North. “The cause of that is fire suppression and the existing debt of wood fuel.”

And now a large, well-managed forest appears to have turned a high-intensity fire into a low-intensity one, proving that how forests are managed outweighs the higher temperatures and longer fire season caused by climate change.

“It ain’t over till it’s over but so far it looks as though [Southern California Edison (SCE) electric utility’s] decades of burning and selective cutting in its Shaver Lake forest has paid off, big time,” tweeted Jared Dahl Aldern, a forest historian, on Saturday.

For the time being, everyone should pay attention to suspicious activity in their neighborhoods whether or not the “message” has the blessing of big tech.

Not a word about the countless, never ending lawsuits filed every time they want to manage the forests and reduce the effects of fires like these.
These lawsuits have been going on for decades and often take years to resolve and by then the problem has worsened or the proposed remedy is no longer effective.
It is now they blame the same government for issues they tried to mitigate in the past.

I’m so old that I can remember that back in the 1970s the McKenzie Ranger District of the Willamette National Forest proposed “pre-commercial thinning” and undergrowth removal in its then-and-now vastly overgrown Douglas Fir forests (with lots of old-growth). This is the area now ravaged by the ~162,000 acre Holiday Farm fire east of Eugene in the Oregon Cascades.

The “environmental community” had a hissy fit and sued to stop it, claiming ridiculously, among other things, that the loggers who would be engaged to do this work might “accidentally” on purpose cut down a tree deemed too large and also “might make a profit” from it.

Now we have a ravaged landscape, three or four thousand displaced residents, one completely leveled town, and one of the most scenic river canyons in the country ruined for a generation or more.

I wonder how the spotted owls and other “endangered species” are doing in the midst of all these fires exacerbated by the enviromental restrictions designed to protect them.

1
notamemberofanyorganizedpolicital in reply to CorkyAgain. | September 15, 2020 at 9:47 pm

The Leftists say they are delicious,
along with some tofu stuffing….

Better than a Dog-faced Climate Solder.

On the other hand, Joe Biden counts among his supporters ACTUAL arsonists.

That would make DJT our “fiery yet mostly peaceful climate leader.”