Israel-Bahrain joint statement: “This is a historic breakthrough to further peace in the Middle East.” 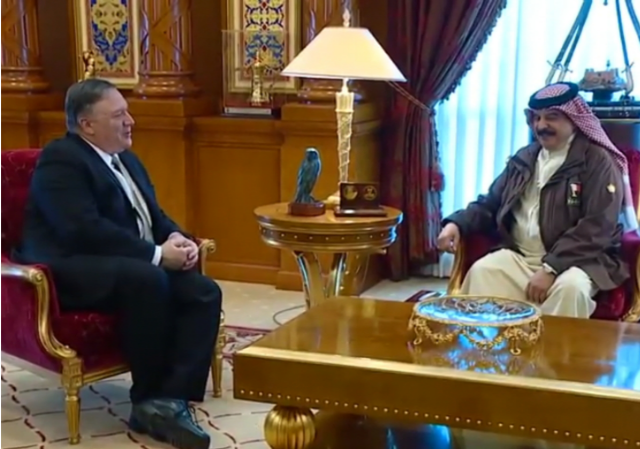 Weeks after the United Arab Emirates agreed to a peace deal with Israel, Bahrain has joined the fellow Arab Gulf state in normalize diplomatic relations with the Jewish State, a statement released by the White House on Friday said.

“This is a historic breakthrough to further peace in the Middle East. Opening direct dialogue and ties between these two dynamic societies and advanced economies will continue the positive transformation of the Middle East and increase stability, security, and prosperity in the region,” the joint statement issued by Bahrain’s King Hamad bin Isa Al Khalifa, Israeli Prime Minister Benjamin Netanyahu, President Donald Trump said.

With today’s agreement, Bahrain will be joining Israel and the UAE at the White House signing ceremony next week, Reuters reported.

Another HISTORIC breakthrough today! Our two GREAT friends Israel and the Kingdom of Bahrain agree to a Peace Deal – the second Arab country to make peace with Israel in 30 days!

The Times of Israel reported the landmark development:

According to the officials, Trump will make the announcement at the White House at 1 p.m. Eastern time. It was not immediately clear whether Bahrain will join the formal signing of the so-called UAE-Israel Abraham Accord at the White House on September 15, or simply issue a statement about its intention to establish relations with Israel.

The kingdom of Bahrain, a tiny island nation close to the UAE and Saudi Arabia, has been expected to be the next country to establish relations with Israel, as it has long made public overtures to the Jewish state.

Trump hinted during a Thursday press conference that another country may join Israel and the UAE for their normalization signing ceremony at the White House.

“Next week at the White House we’ll be having a signing between the UAE and Israel, and we could have another country added into that. And I will tell you that countries are lining up that want to go into it,” Trump said during a White House press briefing.

“You’ll be hearing other countries coming in over a relatively short period of time. And you could have peace in the Middle East,” he said.

Joint Statement of the United States, the Kingdom of Bahrain, and the State of Israel pic.twitter.com/xMquRkGtpM

Jerusalem-based newspaper Israel Hayom on Friday reported the recent diplomatic developments between the Israel and Bahrain, and the role played by the Trump administration:

While US Secretary of State Mike Pompeo was visiting Bahrain in late August, a State Department official said Washington would help Israel and Bahrain reach normalization “if needed.”

While announcing the Israel-UAE peace deal on August 13, President Trump indicated that other Arab countries might normalize relations with the Jewish State on a comparable basis.

“Now that the ice has been broken I expect more Arab and Muslim countries will follow the United Arab Emirates,” President Trump said in the statement delivered from the Oval Office.

Note: Bahrain normalizing with Israel doesn’t happen without Saudi permission. It just doesn’t. Which means that this regional peace is going to broaden.

“In recent years, Israel under my leadership has made advancements in ties with such countries as Sudan, Oman, Bahrain and other nations in the Gulf,” he said shortly after the White House announcement. “I have reason to be very optimistic that today’s announcement with the UAE will be followed by more Arab nations joining our region’s circle of peace,” he added.

With Bahrain now following the UAE’s example, those hopes are turning into reality.

As more and more countries normalize relations with Israel, the region becomes more stable, secure, and prosperous—and we can keep returning more of our great American troops home. pic.twitter.com/03k5CsPrGp

This is not all that surprising. I used to live in Saudia and my family and I would tak vacation trips to Bahrain two or three times a year. It was like being back in the apostates again. They even have a Jewish cemetery and Jewish center in Manama

Amazing how the Middle East changes when the US doesn’t need their oil anymore.

To be fair, the world still needs ME oil.

Absent President Trump the ME would be the same as always. It is this president that has ended the dependence on ME oil in the USA, and created the need for the ME countries to follow our lead if they expect to survive.

Then Chad, a majority-Muslim nation, announced earlier this week that it will be putting an embassy in Jerusalem.

This insidious plan is to occupy Jerusalem with embassies.