“Does anyone else think it’s a bit of a stain on Transylvania University for accepting Nick Sandman?” 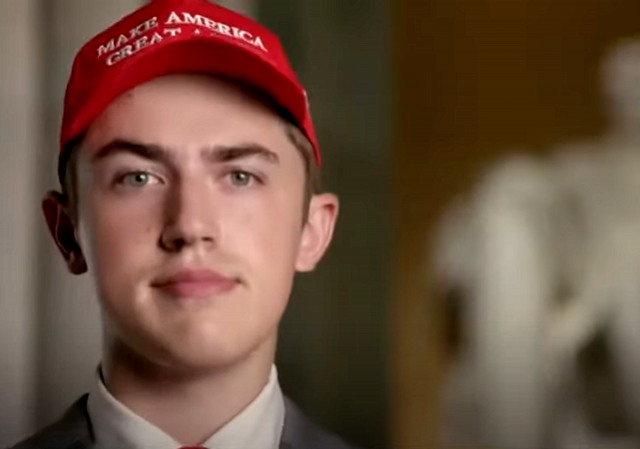 Nicholas Sandmann, the young man who was smeared by the media for the sin of wearing a MAGA hat, and ended up speaking at the 2020 Republican National Convention, has been accepted as a student at Transylvania University in Kentucky.

As a result, an official at the ACLU is now attacking the school. This is unreal.

I have previously written, as a long supporter of the American Civil Liberties Union (ACLU), about my concern over how the venerable group has changed under its current leadership, including a departure from its long robust defense of free speech. Recently, the ACLU has abandoned its famed neutrality and has not supported some on the right while supporting those on the left. Now, the ACLU’s Samuel Crankshaw in Kentucky has targeted Transylvania University for admitting Nick Sandmann, who was falsely accused of abusing a Native American activist in front of Lincoln Memorial.

Does anyone else think it’s a bit of a stain on Transylvania University for accepting Nick Sandman? I’m sure it’s a “both sides” defense, but it’s pretty counter to their mission and another instance of there not actually being equal sides to an issue. I think TU should accept anyone willing to have an open mind and engage in debate, regardless of their views. That’s how we all learn. That’s Transy’s mission.

But this kid clearly is a provocateur in training with no intention of learning. He exists only to troll, intimidate and play victim. He and his attorney proudly use their national platforms to promote QAnon, which has *literally* been the direct cause of multiple instances of violence (not to mention all of the other batshit stuff). He is proudly defending Kyle Rittenhouse, who murdered two people for exercising political speech. Ironically, this silenced victim is running with Don Jr., spoke at the GOP convention, has a bill in his honor at the General Assembly, has attended private schools, has a national law firm representing him, etc. So silenced. He’s no different from the likes of Milo Yiannopoulos, but he is more dangerous.

Crankshaw noted that he was speaking on his own behalf and not for the ACLU.

Professor Turley reports that a ‘diversity scholar’ at the school responded positively to Crankshaw and promised to ‘monitor’ Sandmann:

One person responding positively was Dr. Avery Tompkins, an Assistant Professor and Diversity Scholar at Transylvania University, acknowledged that the university supported diverse viewpoints but promised to closely monitor Sandmann while he is on campus: “If he were to cause problems by being disruptive, trolling, or engaging in unethical behavior of any kind, I would immediately document it (just like I would for any student doing the same thing)…and he would just be putting himself in a position for me to file a conduct report.”

Brittany Bernstein of National Review has a response from the university:

The university said in a statement to National Review Tuesday that it would be reviewing the situation and that “Transylvania, like nearly every campus, is composed of those holding the full range of viewpoints.”

“There are two things that, as a university, we are not able to discuss: our students (without their permission) and personnel matters,” the statement said. “In response to posts on social media and other websites over the Labor Day weekend, we reiterate that point. A review of the situation will be conducted expeditiously by the appropriate university officials.”

I want to apologize for my mistake in singling out a student and any misunderstandings that arose from that. One of my favorite things about working at a liberal arts institution is that the University community has diverse perspectives. All students, faculty, and staff are able to engage in civil discourse with those whose views may be different from their own, and to learn about those views in an academic setting. I value and support these conversations with students, and I know that students value these conversations with their peers as well.

Someone apparently got a phone call from the legal department.

Have you ever seen such contempt for a young person from people on the left?

Wow, I see another libel suit in the making. I hope Nick would do it.
That Crankshaw is spreading dangerous allegation about Nick, and other kids will make his life difficult or harm him.

The ACLU is a bought and paid for part of the George Soros hate-American campaign.

> … But this kid clearly is a provocateur in training with no
> intention of learning. He exists only to troll, intimidate and
> play victim.

There’s your grounds for another defamation suit. Crankshaw, you *****! With the complete video of that [non-]confrontation available to anyone who wants to see it (mostly boring..) and desperate settlements from the media giants who defamed him, you still perpetuate the brazen lie that he is a provocateur? The only incident in which he was involved was thrust on him, the obvious victim of a provocateur.

I guess I won’t trust you with my accounting, since I firmly believe 2+2 == 4 and you apparently have your doubts.

It’s an opinion, and therefore not actionable.