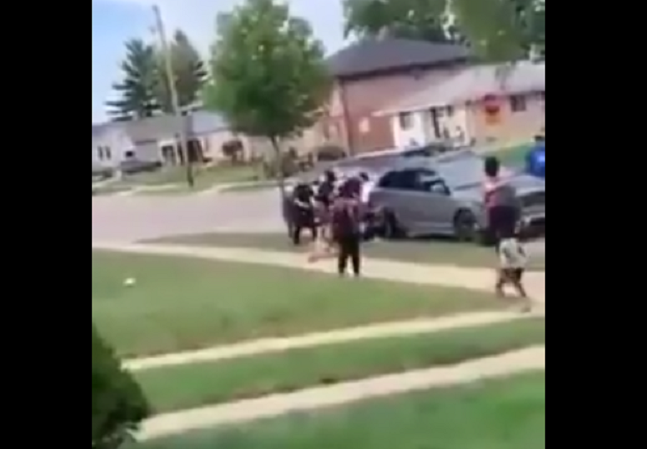 The initial video released of the Jacob Blake police incident picked up as Blake headed to his vehicle apparently in defiance of police orders to stop.  Since its release, we now have more information about the incident, including video of the earlier part of the confrontation between Blake and police.

This newly-released video shows Blake brawling with police officers before detaching himself and walking to the driver’s side of his vehicle.  Reports indicate that he had a knife, and that the knife was later found in the vehicle.  Blake’s attorney denied that his client had any weapons in the vehicle, something contradicted by a later Wisconsin Department of Justice update.

The Kenosha police do not wear bodycams, so the following video is taken by a bystander.

New video shows Jacob Blake assaulting Kenosha police officers moments before going for what they reasonably thought was a weapon in his vehicle. pic.twitter.com/xTllAOsfqV

An attempt to use nonlethal force failed when a taser reportedly “was unsuccessful.”  It is not clear at this time if the taser device failed or if it discharged properly but had no impact on the target.

DCI said Officer Rusten Sheskey and other Kenosha police officers were originally sent to a home on the 2800 block of 40th Street after a woman reported that her boyfriend was there when he was not supposed to be on the premises.

Officials said Sheskey has been an officer with Kenosha police for seven years.

Police tried to arrest Blake and deployed a Taser to stop him. Officials said Blake walked around his vehicle, opened the driver’s side door and leaned forward.

Sheskey fired his service weapon seven times into Blake’s back while holding onto his shirt, according to DCI.

Police said no other officer fired their weapon. The Kenosha Police Department does not have body cameras, which is why no body cam footage is available.

In an investigation after the shooting, officials said Blake admitted he was possessing a knife, which was recovered from the driver’s side floorboard of his vehicle. No other weapons were found in the car.

The update conflicts with Blake’s attorney Ben Krump, who said Blake did not have any weapons in the vehicle at all.

Blake immediately received medical aid and was taken to Froedtert Hospital in Milwaukee, where he remains hospitalized.

The involved officers have also been placed on administrative leave.

While we do not have all of the details yet, what we know for certain is that he is not the first Black man or person to have been shot or injured or mercilessly killed at the hands of individuals in law enforcement in our state or our country.

And we stand against excessive use of force and immediate escalation when engaging with Black Wisconsinites.

The local police union is pushing back.

‘Anytime deadly force is used, our hearts go out to those affected by it,’ Pete Deates, president of the Kenosha Professional Police Association, said in a statement.

‘We assure you an independent investigation is being conducted by the Wisconsin Department of Justice, Division of Criminal Investigation.

‘Until that investigation is completed, we ask that you withhold prejudgment about the incident and please the let process take place.

‘Governor Evers’ statement on the incident was wholly irresponsible and not reflective of the hardworking members of the law enforcement community, not to mention the citizens of the City of Kenosha.

‘As always, the video currently circulating does not capture all the intricacies of a highly dynamic incident. We ask that you withhold from passing judgement until all the facts are known and released.

‘We, along with the citizens of the great City of Kenosha, ask for peace and to let the process play out fairly and impartially.’

The U.S. Department of Justice has announced that it will be conducting a federal civil rights investigation of this police shooting.

All of the red states just need to have a fantasy draft to take the best cops from the undeserving purple and blue states that want to act like idiots.

They can have whatever is left over after the red states get all of the best cops. They can even fill in with quota hires and social workers…yay big bonus for them!

Then, let’s compare how each state is doing in 5 years.

If I were running a red state police hire program, I’d accept only the applicants who wanted to do real policing and had the integrity and spine to walk away from their blue paychecks first. I wouldn’t run a hangdog rescue kennel.

Imagine, the P***y G*****r In Chief commenting on this page!. He’s sure Making America Raped Again, just like he said he would.