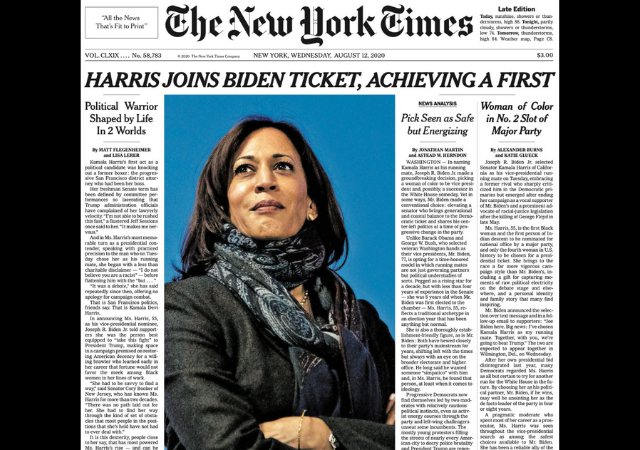 I’m so old, I remember when the New York Times was super meh about a woman on a presidential ticket. Even a woman Governor.

The New York Times cover after Biden’s announcement that Sen. Harris was his VP pick:

“Political warrior” “safe but energizing” “woman of color in No. 2 slot of major party”…

Wonder how much longer this opinion piece stays up though:

Surprised this NYT article is still up https://t.co/ZGIGIuBDjz

Anyway, flashback to 2008 and this is how the NYT covered McCain’s pick of Palin:

For comparison, "An outsider who charms." LOL pic.twitter.com/lka6mNdlhe

And also a “bold move with risks.” Split with an above the fold article on a surge in… natural gas cars? Neither is Palin’s name included and instead she’s “Alaskan.”

Doesn’t really matter what or who she is, as it holds that Harris is a candidate who ran a horrible primary campaign and struggled to muster support in her home state, so the NYT and their compadres in the media bubble can cheer and spin as long as they like, but I’m not sure how it changes anything with actual voters.

Kamala got the nod because Creepy Uncle Joe foolishly boxed himself into a corner by limiting his choices by genetalia. Once he added skin tone it was all over.

Kamala brings nothing positive to the ticket as Kommiefornia is already a lock. Plenty of negatives in this anti law enforcement kick the Dims are on. The radical left aren’t impressed by Joe n Hoe.

It’s been HeelsUp since before the Primaries started

They just didn’t expect her to flame out so fast, so on to Plan B

Notice the looming-up-in-awe perspective of the photo.

1
notamemberofanyorganizedpolicital in reply to The Friendly Grizzly. | August 13, 2020 at 12:55 am

You mean like she’s down on her knees again?????