Join me and three distinguished panelists (Robert Shibley of The FIRE, Joshua Katz of Princeton, and Jason Hill of DePaul) to discuss cancel culture in Higher Education, and what can be done to save Higher Ed from itself. 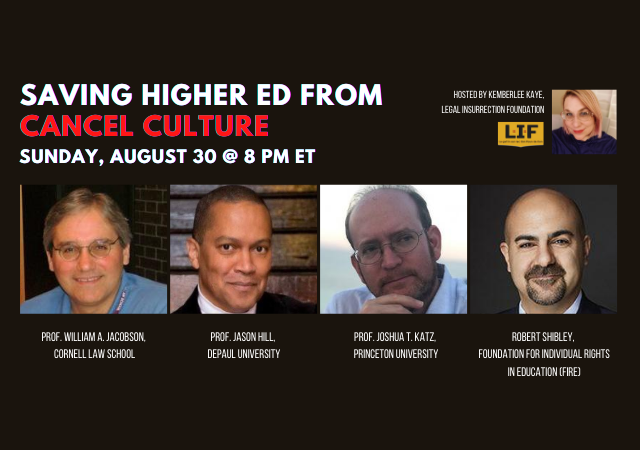 The panelists are well-equipped through experience and profession to address ‘cancel culture’.

I will be the moderator and a panelist. As you know, I am a Clinical Professor of Law at Cornell Law School. After I wrote two blog posts critical of the Black Lives Matter ‘hands up, don’t shoot’ narrative and the rioting/looting, I was subjected to an alumni campaign to get me fired (not successful), a boycott of my course called by 15 student groups (not successful, the course is oversubscribed), and I was denounced by 21 colleagues and the Dean of the law school. You can read about my situation here and here and here and here, among many places.

The other panelists are:

Robert Shibley, Executive Director of the Foundation for Individual Rights in Education (FIRE), the premier organization fighting to preserve free speech, open dialogue, academic freedom, and due process on campuses. I’ve known Robert since the early days of College Insurrection, and there is no one better to give an overview of what is happening on campuses.

Joshua Katz, Cotsen Professor in the Humanities and Professor of Classics, Princeton University. Prof. Katz authored a column at Quillette, A Declaration of Independence by a Princeton Professor, that received enormous attention, sparking an effort to get him fired (not successful) and denounced by the President of Princeton (successful). You can read his after-action report, I Survived Cancellation at Princeton.

Jason D. Hill, Professor, Honors Distinguished Faculty, DePaul University. Prof. Hill has been targeted on campus repeatedly over the years, including after he wrote a column in 2019 at The Federalist, The Moral Case For Israel Annexing The West Bank—And Beyond, and at Frontpage Mag, An Open Letter to Greta Thunberg. Prof. Hill has written and lectured extensively on issues of campus and the broader culture, and frequently appears in major media.

Kemberlee Kaye will be hosting the event and assisting in asking viewer-submitted questions submitted during the live event. Kemberlee is the Director of Operations and Editorial Development for the Legal Insurrection Foundation. If you want to post questions in the comments to this post, we will save them for the event.

It is important that you REGISTER HERE — We have not yet decided whether to have this as a closed or open event, so registering will reserve a spot should we decide to close the event. It also will allow us to communicate with registrants as to any changes or log-in information.

Registration is required, as this will be a closed Zoom event.

Log-in information will be emailed to registrants shortly before the event starts.

Cancel culture is nonsense.
The only way to “assist” the people pushing this need to help them “OWN IT” in their own lives. If they were exposed..and their accountability was lit up, they would cower. If cancel culture culprits and organization are ripped apart, investigated and every comment dragged out ever said or printed since they were 5 years old, they might get the message.

***ONLY if ALL are held to the same fire is justice realized and policies justly created.

However, as a people and an educated nation we should keep moving forward, not waste time looking back. WE know better than to move backwards, and should look to unite to improve.

But b/c there is the promise of power ignited in canceling others, the nefarious will use whatever methods easiest and quickest. And…there are MANY nefarious actors- companies, programs, universities, politicians, individual professors with hatred agendas, and of course foreign agents looking to spread their own message that moves against American history and ideologies they don’t agree with.
The higher education system is quickly losing its so-called “open-mindedness” for learning, along with its prestige.

It’s been with us for at least two generations, educating our children in the West with neo-Marxist ideologies. They’ve simply become more and more egregious. It started with gender studies and feminism studies.”

“I had a conversation many years ago, which only came back into my consciousness three or four years ago. I was still about 20 years old at the time. I met a gentleman who said something about how to figure out where our country is going.

He was an asset manager who I just bumped into while doing a hike up Table Mountain.

He said, “If you watch what’s taking place in the universities, if there’s a very strong zeitgeist in one way or the other, watch that. Whatever that zeitgeist is, you’re going to find that, within five to ten years, in the country.”

The reason is that the leaders of the country—the CEOs, the people in management, in politics, in the courts, all come from those universities. If you look at what has been transpiring in the West over the last decade at least, in the universities—it is frightening.

It’s not a surprise now that we find these people are in positions of power. They’re instituting their vision of how the world should work. Their ideology—their zeitgeist—is Marxism. So, this woke culture is just Marxism.

Unfortunately, it is now in the DNA of the West.

As much as I want to believe that we could eliminate that, it starts with the universities and being able to educate a whole new class of people correctly….”