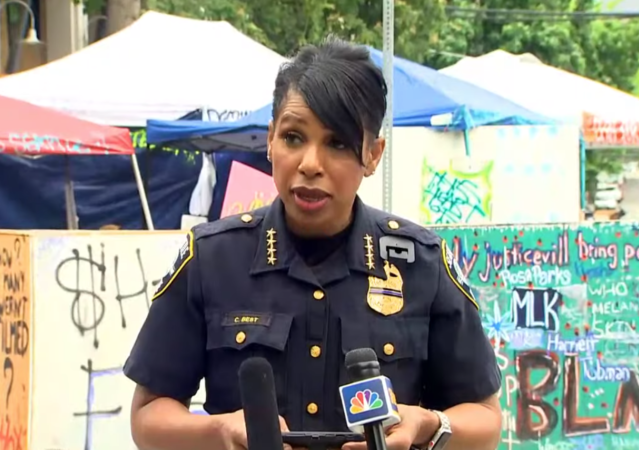 Chief Best has been abandoned by local leadership, including the Seattle City Council in her efforts to tame riots raging under the guise of racial equality.

Press conference at 11am Tuesday.

Say Source: @SeattleCouncil, & actions over the last days, including a proposed massive pay cut, plus refusal to denounce marches to her house, reasons in decision.@KING5Seattle

A resignation letter from Best was published on Twitter:

Seattle’s City Council voted to cut police funding by 14% in addition to major cuts to special units. From local news:

After several hours of debate Monday and in previous days, Seattle City Council’s approved its controversial spending plan which reduced funding to the Seattle Police Department by 14 percent, far below the 50 percent reduction that some members had lobbied for.

Approval of the measure first came with an 7-1 vote on several amendments introduced by the council that included cutting the pay of top police officers and eliminating the Navigation Team and SWAT unit.

“Why on Earth – for the people who’ve worked so very hard – would we ever consider not having the best of the best and compensating them fairly?” Best said in a press conference in response to the cuts. “I find that absolutely shocking and quite frankly – I think it’s punitive and not well thought out. And that’s exactly how I feel about it.”

The budget reduction could affect as many as 100 officers through layoffs and attrition — an action supported by demonstrators who have marched in the city following the police killing of George Floyd in Minneapolis but strongly opposed by the mayor and police chief.

Seattle currently has about 1,400 police officers and the reductions up for a final vote fall far short of the 50% cut to the department that many Black Lives Matter protesters are seeking.

The City Council had been ready to cut Police Chief Carmen Best’s roughly $285,000 annual salary as well as the pay of other top police leaders. The council settled for a more modest six percent cut to Best’s salary but did allow a bigger pay cut for other top brass in the department.

Best was the first black woman to serve as police chief and had been with the department for 28 years.

So… because of the BLM movement that eventually came down to defund the Police led to a strong and successful Black women getting a paycut and having to resign a respected position. 🤔 BLM once again improving the lives of the Black community. ✊🏿

Best is retiring only because she is losing her department and has become a target of the lunatic left. She carried out the stupid wishes of the city council for months. There is no integrity here. Integrity would have been telling the council to shove it and upholding the law to protect the citizens she worked for.

We spent the week in Eastern Wa… driving home I thought how awesome it would be if the Eastern half of Wa, Or, and Idaho ceded and made their own 3 states. This would rock the senate and the electoral college. I’d move to the other side of the mountains in a heartbeat.

In black, female law enforcement leadership, the screaming D’s have now swapped out this chief for Kamala Extract.

Well, it’s clear what their priorities are.

When Biden heard that Harris got where she is by sexually servicing Willie Brown, of COURSE he chose her.

He probably forgot who she is already, but he’ll remember when he starts groping her.

Where I was from, we had three black police chiefs in a row: all chosen solely based on race. Naturally, all three of them sucked.

So, despite more than two months and protests and riots, black Lives really don’t matter in Seattle.