“Right here is another example of a white man feeling comfortable. I’ve bet you’ve never had a struggle in your life! Ever!” 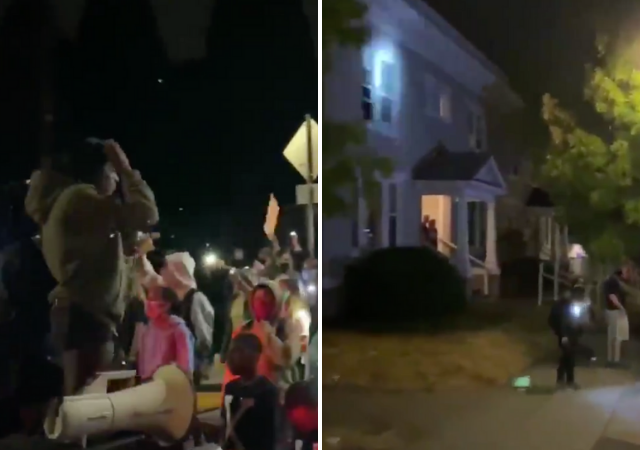 So, they seem nice.

In Portland, where the BLM mob continues to run amok, the mob has upped the ante, terrorizing residential neighborhoods, shouting at random people, harassing small business owners, shining lights into homes at night, screeching, “wake up, mother effer, wake up!”

“Wake up, mother f—ker wake up!” chant BLM in Portland tonight as they go through residential areas and shut down the streets. pic.twitter.com/DOah2d1yji

“Right here is another example of a white man feeling comfortable. I’ve bet you’ve never had a struggle in your life! Ever!” shouts the chick at the mic. Right, because being born white means the default setting is struggle-free. It’s literally the exact same assumptions they’re railing against. Or so they say.

“Your flag does not represent justice and liberty for all!” she screeched.

For our previous coverage of the Portland mess, see here.

The government protects the lawless from people like us. The government has chosen to allow these people to block roads and disturb the peace.

I agree with 4fun though, the neighborhoods are likely progs, let them get a full measure of it.

supporting local law enforcement is one important part of ending this bs–another is removing their enabled/emboldened “handlers” from office–either via the ballot box or via recall–until then, unfortunately, our countrymen in portland are on their own against the mobs

am praying for a PDJT landslide in november but until then, would encourage our countrymen in portland to treat these blm/antifa/fascists with their own tactics–dox them, identify them, go to THEIR homes in the middle of the night in numbers–see to it that THEY have to live by their own rules–if that doesn’t bring them around, then other methods must be employed–violence(to be sure)is a last resort, but if necessary for the defense of your loved ones/yourself, it is many times the saviour of decent men and women

Tennessee has the right idea!
https://townhall.com/tipsheet/mattvespa/2020/08/22/tennessees-governor-has-quite-the-punishment-for-leftwing-rioters-that-will-definitely-bring-lawsuits-n2574856