“Mr. Doe’s claims against the Defendants are based on Oberlin College’s well-documented, gender-based discriminatory policies and procedures that it has implemented against male students” 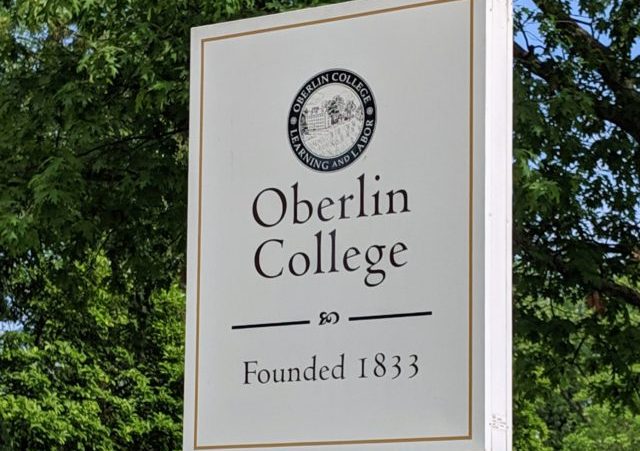 John Doe No. 2 is an Oberlin College male student who seeks an injunction halting what he asserts is a biased sexual assault hearing system.

John Doe No. 2 faces the same system of college adjudication which led a different student, John Doe No. 1, to sue after expulsion, asserting that the college had a 100% conviction rate for accused students (all or almost all male) who went to hearing.

The Sixth Circuit Court of Appeals recently reinstated John Doe No. 1’s case, finding such systemic results could be evidence of bias in the system:

Unfortunately for John Doe No. 2, that Sixth Circuit decision had not yet been issued at the time his case was thrown out by a federal district judge. We covered that federal district court ruling in Oberlin College male student tries, and fails, to obtain injunction halting allegedly biased sexual assault hearing:

Once in federal court, things went downhill quickly for John Doe No. 2.

While there is no transcript available electronically, there appears to have been a conference call at which the judge expressed an intent to dismiss the case as not “ripe” for adjudication. There is no indication on the court docket that at that point the defendants even had filed a written opposition to the motion or Answer to the Complaint. I requested copies of any opposition filings from counsel for both plaintiff and defendants, and received no response.

On April 1, 2020, John Doe No. 1 filed a Motion for Reconsideration of Court’s Expressed Intention To Dismiss Plaintiff’s Claims And Deny Plaintiff’s Motion for a Temporary Restraining Order (pdf.), based on a recent decision in an unrelated case against the University of Michigan in which an injunction was entered.

The supporting legal argument by John Doe No. 2 focused on the possibility of a hearing not in-person, with a lengthy discussion of a case against the University of Michigan in which an injunction was granted against a process that did not guarantee an in-person hearing:

Plaintiff respectfully asserts that Oberlin College’s Sexual Misconduct Policy contains provisions and procedures that would allow the College to make an adjudication that he violated said policy by engaging in non-consensual sexual conduct with another student without providing him with the constitutionally mandated live hearing requirement and without providing him with the constitutionally mandated opportunity to confront his accuser and any other adverse witnesses against him in the presence of a neutral fact finder….

The Judge did not agree, and on April 7, 2020, entered an Order (pdf.) dismissing the due process claims on the merits, and the remaining claims without prejudice (meaning they can be brought later) because they were premature.

John Doe No. 2 appealed, and now has filed his Appeal Brief (pdf.).

A lot of the Brief concerns the procedure in the District Court, and what he claims was an improper sua sponte dismissal of the case. Other parts of the Brief concern substantively whether John Doe No. 2 has a claim to enjoin a hearing that hasn’t happened. Here are the issues presented:

STATEMENT OF THE ISSUES

The Statement of the Case brings up the Sixth Circuit decision in John Doe. No. 1 which came down after the District Court decision:

This case involves yet another male student at Oberlin College suing the College for sex discrimination, in violation of Title IX of the Higher Education Act of 1965. Mr. Doe’s claims against the Defendants are based on Oberlin College’s well-documented, gender-based discriminatory policies and procedures that it has implemented against male students accused of violating its sexual misconduct policy and its biased handling of its investigation and adjudicatory process into whether he violated the College’s sexual misconduct policy.

The District Court sua sponte dismissed Mr. Doe’s federal and state law claims against Oberlin College and the other named Oberlin College Defendants and denied his Motion for a Temporary Restraining Order and a Preliminary Injunction based on its mistaken beliefs that: 1) he could not plead a viable due process claim against the Defendants for violating his constitutional rights to due process because Oberlin College is a private college; and 2) his other federal and state law claims were premature (lacked ripeness) since the Defendants had not completed their investigation and adjudication of whether he violated the College’s sexual misconduct policy.

Notably, within three (3) months of the District Court’s judgment entering dismissing Mr. Doe’s claims, this Honorable Court issued an Opinion in a separate case finding that a male student at Oberlin College had “amply stated a claim for sex discrimination in violation of Title IX” against the College as it related to the College’s investigation and adjudication that he had violated its sexual misconduct policy.1 In that case, this Honorable Court vacated the district court’s judgment entry of dismissal and remanded the matter back to the district court for further proceedings consistent with its Opinion.2

Similarly, in the present matter, Mr. Doe respectfully moves this Honorable Court to vacate the District Court’s judgment entry of dismissal and to remand this matter back to the District Court for further proceedings on his claims against Oberlin College and the other Defendants.

The college’s Brief is due in about a month. We will continue to follow the case.

Will it end in time for my soon to be college age sons?

16
notamemberofanyorganizedpolicital in reply to legacyrepublican. | August 9, 2020 at 9:37 pm

That college really has a death wish.

I pray they get it….

Oberlin College exhibits rabid diversity (i.e. color judgments) including racism and sexism, and should be put down for the sake of students, faculty, and society.

Send them to Hillsdale

If becoming competent, self-supporting American citizens is your goal for them, get them into training for a trade. They will find great joy in being productive.

There is no dishonor in having dirt under your fingernails from a job where you have to shower after work rather than before.

My grandfather started on a GM production line and then worked his way into skilled trades. He was smart enough to have been in college, but at that time those factory jobs paid very well.

As a young man most of my friends were much older, many were college professors and retired people. Retiree often had machine shops, woodworking shops, upholstery shops, etc, in their garages and basements.

My point is that lots of smart people ended up in jobs far below their capabilities as a result of economics.

That does not mean they found their jobs as satisfying as they might have with more education.

Our son refused to date in college…..for just this reason.
How sad is that?

Wise.
I think back to when I was that age. Early 60’s, before things got nuts.
I shudder.
I know that my 50 yr marriage would never have happened had I entirely behaved myself. She would have found someone who showed some “interest”. And perseverance.
I pity the young men. It has to be tough.

Used to be that a guy who videotaped his dalliances was a pervert. Now he’s just prudent.

I’ve about decided that a college education is actually a detriment today. The universities have devalued their own paper, they’re putting out mostly uneducated troublemakers. Great example: AOC, who graduated with a degree in (of all things) economics, the very subject of which she is most ignorant. I’m about ready to steer my grandson into a profitable trade, where life experience quickly evaporates any taint of any commie economics to which he may have been exposed. And I’m saying this as a graduate of what was once a very fine college, who has done very well for himself because of it… but that college and that social order no longer exist today. Hopefully, we will get it back, but not in the time frame he will need it.

Sex discrimination, too. Oberlin is marked by diversity.

Are there still any straight white boys who are stupid enough to go to Oberlin? If there are, I can’t feel sorry for them, because they should have known that they would be subjected to overt discrimination.

I can’t imagine anyone paying over $200K to go through four years of being taught to hate yourself for being inherently racist, sexist, homophobic, transphobic, etc while you’re just trying to get an education.

Your speaking of 99.9% of all our universities today