There are many reasons to vote against Kamala Harris, but she is eligible to be Vice President (and potentially, President), just as were Marco Rubio, Bobby Jindal and Ted Cruz. 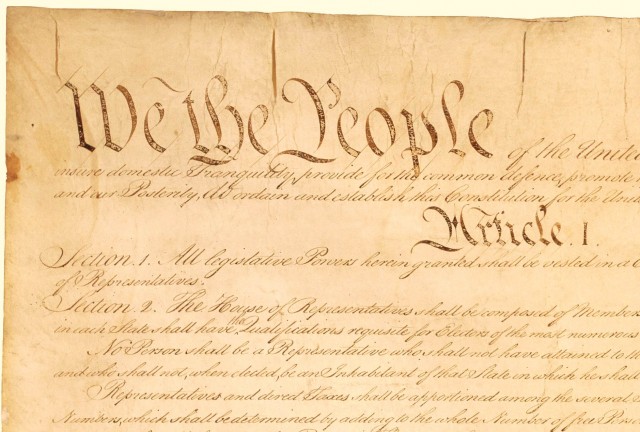 The theory is that while she was born in the United States (Oakland, CA), some combination of her parents not being citizens at the time or not being naturally born Citizens themselves renders her not a natural born Citizen. 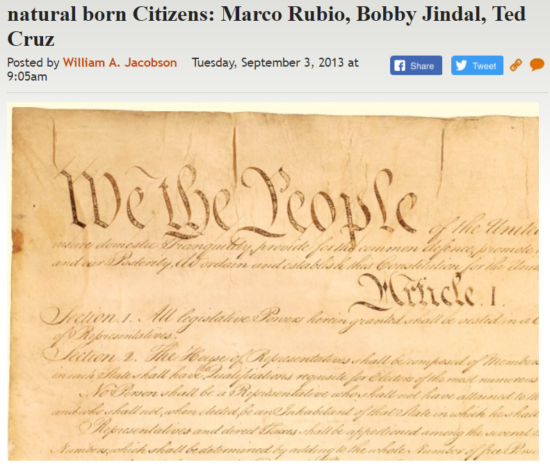 I see nothing that distinguishes Harris from those three Republicans, even assuming her parents were not U.S. citizens at the time of her birth in Oakland. There are many reasons to vote against Kamala Harris, but she is eligible.

I will repeat here only the Summary and Conclusion sections of that prior post.

There are few eligibility requirements to be President.  You don’t have to be smart, wise, experienced, honest, educated, or a particular gender or race.

Whether a candidate is a “natural born Citizen” has been the subject of political controversy for well over a century, dating back at least to Chester Arthur, who Democrats at the time alleged was born in Canada, not Vermont.  Among others, John McCain, Barack Obama, and George Romney have had their eligibility questioned.

This political season, the eligibilities of Marco Rubio, Bobby Jindal and Ted Cruz are the subject of debate.

As much as we want certainty, the term “natural born Citizen” is not defined in the Constitution, in the writings or history of those who framed the Constitution, or in a demonstrable common and clear understanding in the former British colonies at the time the Constitution was drafted.  Nor has the Supreme Court ever ruled on the issue, and it probably never will.

The modifier “natural born” is not used anywhere else in the Constitution, and its precise origins are unclear, although  it is assumed to be derived in some manner from the British common and statutory law governing “natural born Subjects.”

Under the law existing at the time of their birth, each became a citizen of the United States at birth.  Rubio and Jindal by the 14th Amendment, Cruz by statute.

I’ve spent a considerable amount of time examining the issue of what “natural born Citizen” means in this context.  While concepts such as “jus soli,” jus sanguinus” and “natural law” are part of the equation, such concepts do not adequately answer the question, no matter how many times or how vigorously they are repeated.  Similarly, relying on statutes governing citizenship does not answer what “natural born Citizen” means in the Constitution and does not render the question trivial.

There is a false construct all around that this is a purely legal question subject to some absolutely right or wrong conclusion.  We should all just admit that we don’t really know for sure what “natural born Citizen” means or meant between the points of inclusion and exclusion.

So what to do in a constitutionally and politically important area in which there is no clear legal answer?

The key to understanding why I reach that conclusion that Rubio, Jindal and Cruz are “natural born Citizens” requires understanding the problem.

The arguments that the term “natural born Citizen” excludes Rubio and Jindal (because their parents were not citizens) or Cruz (because he was born abroad to a citizen mother only) at most raise doubts.  Those doubts, however, never rise anywhere near the level of making the case that Rubio, Jindal and Cruz are excluded.  Most of the counter-arguments are historical conjecture, at best, and rely on speculation not connected to the text of the Constitution or any demonstrable actual intent or understanding of the Framers.

In the circumstance of candidates who appear to qualify based on the text of the Constitution and the traditions upon which “natural born Citizen[ship]” is believed to derive, and as to whom there are at worst some doubts raised, I believe the proper constitutional outcome is to leave the issue to the political process.  To exclude apparently eligible candidates based on speculation as to what the term “natural born Citizen” might have meant is no better, and I would argue much worse.

Remember, these are merely eligibility requirements, not requirements that a person be elected.  It would be consistent with the Framers’ demonstrable concerns to consider loyalty to the United States as a political factor, even if not absolutely legally disqualifying.  If you don’t trust the loyalty of a candidate because of how he or she became a “natural born Citizen,” don’t vote for the person.

I set forth below my approach and reasoning.

By now your heads must be spinning. It’s understandable. This is a very confusing area as to which scholars acting in good faith disagree, although there is a clear weight of authority. But those disagreements, in a sense, are the solution.

A reasonable reading of the plain text of the Constitution supports Rubio, Jindal and Cruz being “natural born Citizen[s]” because they were citizens by birth. There is no clear, demonstrable intent otherwise from the Framers or clear, commonly understood use of the term to the contrary at the time of drafting the Constitution. The British term “natural born Subject” as well as concepts of “natural law” were not clearly relied upon by the Framers, and are in themselves not clearly contradictory to this plain reading of the text.

The burden should be on those challenging otherwise eligible candidates to demonstrate through clear and convincing historical evidence and legal argument why such persons should be disqualified. That has not happened so far, and if two hundred years of scholarship is any indication, it never will happen.

The ultimate arbiter on the issue likely is to be voters, not Supreme Court Justices.

It is for these reasons that I believe Marco Rubio, Bobby Jindal and Ted Cruz are eligible to be President.

There you go. You want the reasoning, read the prior post.

Is this blog owned and moderated by milhouse??

For the opposite view of why Kamala Harris is NOT a “natural born citizen” and therefore NOT qualified for the office of Vice-President see this https://www.newsweek.com/some-questions-kamala-harris-about-eligibility-opinion-1524483

hmmmm… Who will be the first to sue? Will a court give standing to sue?

Like it or not Senator Harris, under our current interpretation, is a Natural Born Citizen. She was born to parents that were legally domiciled in the U.S. And.within the US. If one meets those two points there isn’t any other hurdle to overcome.

The status of the offspring of parents who are not legally present in the U.S. may be debatable but that isn’t the case with Harris. Read Wong v United States for more information.

Nikki Haley is eligible, too. Her parents arrived from India in 1969 and she was born on US soil in 1972.

Haley is a natural-born Indian, and as such is ineligible to hold either the presidency or vice presidency. At the time of her birth, her Indian father had not resided in the US nearly long enough to become a naturalized US citizen so retained his Indian citizenship, which was passed on to Haley by natural law, the basis for our Republic.

Under natural law place of birth is irrelevant. One inherits the citizenship of one’s father at birth regardless of location of the birth.

The initial paragraph of the Declaration of Independence makes it clear our nation is founded on natural law. A key document our Founding Fathers relied on to inform them of natural law was Vattel’s “Law of Nations,” which defines natural born citizen thusly:

§ 212. Citizens and natives.
The citizens are the members of the civil society; bound to this society by certain duties, and subject to its authority, they equally participate in its advantages. The natives, or natural-born citizens, are those born in the country, of parents who are citizens. As the society cannot exist and perpetuate itself otherwise than by the children of the citizens, those children naturally follow the condition of their fathers, and succeed to all their rights. The society is supposed to desire this, in consequence of what it owes to its own preservation; and it is presumed, as matter of course, that each citizen, on entering into society, reserves to his children the right of becoming members of it. The country of the fathers is therefore that of the children; and these become true citizens merely by their tacit consent. We shall soon see whether, on their coming to the years of discretion, they may renounce their right, and what they owe to the society in which they were born. I say, that, in order to be of the country, it is necessary that a person be born of a father who is a citizen; for, if he is born there of a foreigner, it will be only the place of his birth, and not his country.
-Emmerich de Vattel, 1758, The Law of Nations or Principles of the Law of Nature Applied to the Conduct and Affairs of Nations and Sovereigns, Book I, Of Nations Considered in Themselves, Chapter XIX, Of Our Native Country, and Several Things that Relate to It, translated from French

Vattel was such an essential reference document for our Founders that President Washington checked out the NYC Library’s copy and failed to return it.

The Professor’s long winded and clearly untenable interpretation only serves the globalists’ subversive interests. I find myself wondering why he is pushing such garbage.

I completely agree with you.

Thanks, but you have no choice to agree if you embrace the Anglo-American Enlightenment and respect facts, logic, the Constitution, and rule of law. If the Prof’s assessment held any water at all, the natural-born British East African would have welcomed his eligibility being litigated. Nullification of the Natural Born Citizen Clause is a linchpin in the cosmopolitans’ effort to install shitholers, like Obama, in the White House to bring about the destruction of the Republic and the further enslavement of the Europoid subrace.