This is no more about Jacob Blake than the months-long, nationwide riots are about George Floyd 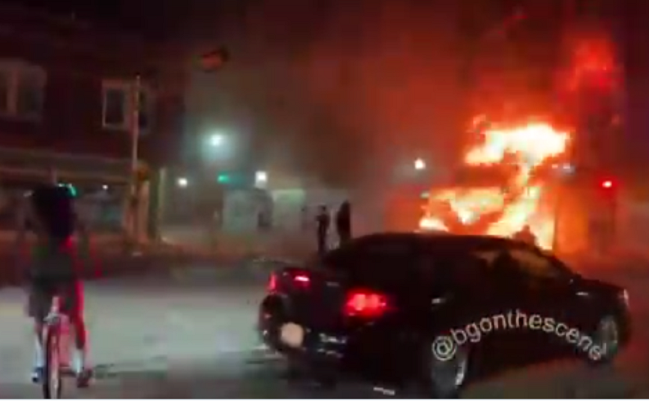 Kenosha, WI is under siege by mobs of violent rioters, looters, vandals, and arsonists. The mainstream media is spinning this as a normal reaction to the police shooting of Jacob Blake, but it’s obviously a gang of criminal thugs wreaking havoc and destroying lives and livelihoods because they can.  No matter the impetus, this is not okay.

We do not yet know the full details of the Blake incident, but from the video that has been released, it seems clear that Blake refused to follow police instructions as he walked to his car, ignoring the officers telling him to stop.

Instead of following lawfully-issued law enforcement commands, he did not stop; instead, he attempted to get in his vehicle, presumably to drive away but possibly to retrieve a weapon. We don’t know yet.

This refusal to follow police commands seems to be a pattern in a lot of the police shootings we see, and of people of all races, the solution is not destruction but education. Do what the police tell you, and you won’t be shot. There, lesson over.

We will provide updates as we learn more from the investigation—including from interviews with Blake, witnesses, and the officers involved—about what led up to the point picked up in the video and what the officers saw behind the door that blocks Blake’s upper body from viewers in the released video.

In the meantime, the rabid BLM/antifa hordes are destroying Kenosha in “protest,” and Democrat leaders—from Wisconsin governor Tom Evers to Kenosha mayor John Antaramian to Joe Biden, the latter of whom was quick to “condemn systemic racism” for the shooting without awaiting facts but not the shocking subsequent violence—are letting it happen.  For three days now.

These disgusting, base criminals have looted, damaged, and/ or destroyed 30 businesses (many of them black-owned), have set entire car lots on fire, have smashed parked cars, and have assaulted at least one person, an elderly man who was trying to protect his business.

This seems peaceful enough; a bit alarming that they are in a residential neighborhood, but they are just marching and screaming claim to the city’s streets (also rather alarming).

“Whose streets? Our streets!” Protesters are marching through residential areas in Kenosha, taking their message to the neighborhoods #Kenosha #JusticeForJacobBlake #KenoshaProtests pic.twitter.com/JnKMVKtJKK

After dark, though, the criminals come out to wreak havoc on everything and everyone in their path.

“I got the phone cases!” A woman cheers as Boost Mobile is looted in Kenosha tonight #Kenosha #KenoshaRiot #KenoshaWi pic.twitter.com/OGH9tH0ZQy

Dump truck set ablaze outside the courthouse, one of many that got incinerated tonight #Kenosha #KenoshaRiots #KenoshaProtests pic.twitter.com/y73oBrRxC4

Rioters use baseball bats to smash street lights & crosswalk signals through downtown as the crowd moved away from the courthouse #Kenosha #KenoshaRiots #KenoshaProtests pic.twitter.com/mGlbvHomjd

The clip provides a glimpse of the twisted, depraved mindset of these criminal mobs.

This clip is INSANE. The fact that some people are standing around the prone body of a man beaten while defending his business and saying that those looting the business and assaulting him have to be understood…INSANE. https://t.co/HwSqFolnka

No, deranged rioters, looters, arsonists, vandals, and assailants, we do not understand your criminal rampage and never will.  No matter how loudly you shriek about your “justice,” all we see is disgusting injustice against the innocent.

Where are these riots you talk of? My local newsreaders speak of “protests” and “demonstrations”. Can’t have too much Social Justice, don’t ya know.

This is going to be a classic self defense case.

Suspect Flees in fear of being attacked and injured or killed
Suspect Fires on attacker in self defense
Suspect flees to get away from other attackers
Suspect falls and can no longer flee
Multiple attackers attack him
1st Attacker tries to kick him in the head
2nd Attacker attacks him with a skateboard as a weapon and grabs his gun. Gun fires either by attacker pulling on gun barrel or suspect firing. Attacker killed
3rd armed attacker comes at him. Suspect fires at 3rd attacker blowing his gun arm to pieces.

If this is not a case of self defense, please explain to me why it is not.

He was fleeing from attackers in both cases.

Video shows Molotov cocktail being thrown at Kyle by the first guy to experience the second amendment in action. Second guy hits him with skateboard before taking one in the 10-ring. Third guy approaches with drawn gun and permanently loses use of right arm. All three cases are clear self-defense by attackers. I also understand that all three were felons, so guy who had handgun should see charges of felon in possession.

The following is graphic, but details the second scene quite well. Kyle tried to turn himself in as the po-po approached in armored vehicles but they clearly instructed him to just “get out of the street.” He wasn’t fleeing, he just went home.

Some of the above comments were sourced from other videos available on the web. If possible, when viewing these, save to your device so they can’t be scrubbed later on.