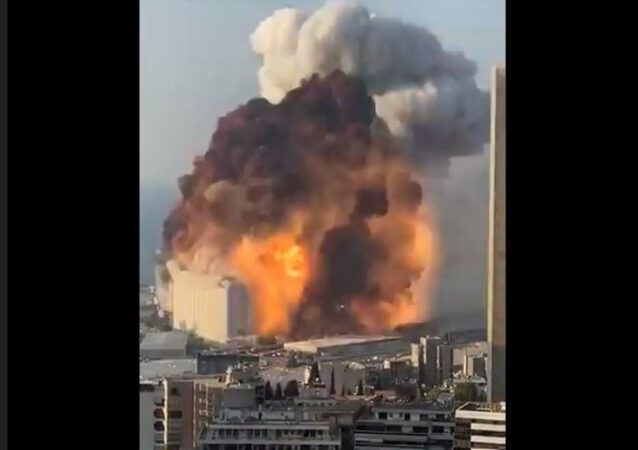 Quoting Western intelligence reports, the German daily revealed that the Hezbollah received substantial quantities of  ammonium nitrate explosives from Iran. The Iranian deliveries match the timeline of the stockpile stored near the Beirut port which exploded on August 4, leaving behind a trails of death and destruction in the Lebanese capital. Die Welt did not reveal the names of the intelligence agencies, a standard practice for the leading German newspaper which regularly publishes exclusive reports based on Germany’s Federal Intelligence Service (BND) and other services.

Following the devastating explosion in Beirut which took place the week before last, several clues [have emerged] that the Lebanon’s Shia militia Hezbollah repeatedly worked with the particular chemical which also caused the detonation in the Lebanese capital: ammonium nitrate, a [type of] salt that can be used as an explosive, but can also be used in manufacturing fertilizers.

Hezbollah chief Hassan Nasrallah has since vehemently denied that his organization had anything to do with the chemical stockpile that cause the explosion.  However, according to details [provided by] Western intelligence agencies to Die Welt, the Hezbollah received a large delivery of ammonium nitrate closely coinciding with [the timeline of] material that detonated in Beirut.

According to the information available at present, the explosion occurred on August 4 as the stock of 2,750 tons of ammonium nitrate caught fire which was stored since late 2013 or early 2014 in a hall at the Beirut port. Who exactly ordered the delivery and who was responsible for the storage is presently being investigated.

However, according to the information provided by intelligence agencies to Die Welt, the Hezbollah — precisely at that time — had substantial quantities of ammonium nitrate delivered to Lebanon. The Quds [part] of Iran’s Revolutionary Guard [IRGC] was responsible for the transportation, [the outfit] which handles the foreign operations of that paramilitary [organization] and also holds key position in Iran’s politics.

In January 2020, the then-commandant of the Quds unit, General Qassem Soleimani, was killed in an American drone strike. The delivery of ammonium nitrate to Hezbollah also took place under his watch.

The freight in October 2013 was transported in flexible bulk material containers [also known as the big bags]; probably by one of the official private Iranian airlines that are regarded as front companies for the Revolutionary Guard [IRGC]. One of these, the Mahan Airlines, had its German take-off and landing rights cancelled, under explicit reference to the activities of the Revolutionary Guard.

The other deliveries took place via maritimes and and route, such as over the Syrian border. (…)

Die Welt was able too see the billing documents of the delivery, but cannot fully verify their nature of the declarations. They, however, appear plausible in light of the knowledge on the logistics of the Hezbollah and the Revolutionary Guard. Similar transport routes and deliveries between both the organisations is known for a long times and has been documented in parts.

Qassem Soleimani, the wanted terrorist killed in the U.S. airstrike ordered by President Donald Trump earlier this year, played a key role in procuring and delivering the deadly shipments, Die Welt reported citing intelligence sources. Soleimani, who headed Iranian Al Quds forces, was responsible for the deaths of hundreds of U.S. servicemen stationed in Iraq, the Pantagon revealed in January 2020. President Trump was widely criticized by the U.S. and European media for taking that call.

There are speculations about Hezbollah’s intentions for stockpiling the deadly explosives in the heart of Beirut. “Hezbollah may have amassed the ammonium nitrate to use during the civil war in Syria and advance the military aims of Syrian dictator Bashar Assad” or “for accumulating the deadly chemical … may have been to detonate the material against Israeli targets via Hezbollah’s tunnel system,” wrote Benjamin Weinthal, a research fellow for the D.C.-based Foundation for Defense of Democracies (FDD), who first broke the story in the English language media.

Even with the ‘smoking gun’ now produced by the German newspaper, it is unlikely Western media and European politicians will call for any action against the Hezbollah or its patron, the Iranian regime. The European Union, reportedly due to French influence, refuses to impose a complete ban on Hezbollah, and continues to ‘engage‘ with the political wing of the Iran-sponsored terrorist group.

European powers are equally willing to appease Tehran. Earlier this week, leading European nations ‘sided with the ayatollahs,’ to paraphrase U.S. Secretary of State Mike Pompeo, with UK, France and Germany opposing U.S. efforts to snapback sanctions against the Iranian regime. “No country but the United States has had the courage and conviction to put forward a resolution. Instead, they chose to side with the ayatollahs,” Pompeo said on Friday.

Israeli professor Dr. Mordechai Kedar: On ‘how will the Beirut blast affect Hezbollah; the region?’

Probably because they’re on the same trail themselves.

Ask that rat Sessions. And ask that half-rat, Barr.

Well, this probably isn’t directly traced to that specifically. It appears the Ammonium Nitrate has been there since at least 2013, and the pallets of cash was in 2016.

What is interesting, is looking through the publicly known events of Hezbollah, their Chief Logistics Officer in Beirut was apparently assassinated in December 2013. So September the ship with 2750 tons of AN docks. In October the crew is repatriated and the cargo dumped in a warehouse, and in December the local head of Hezbollah is killed.

I think that’s a very good observation. The pallets of cash no doubt funded a lot of terror, but not this specific one. And I will guess that the reason it sat there unused so long is that it seems like it would be an impressively powerful material to own, it’s actually an impractical military weapon. It’s just too bulky.
So they let it sit, and sit, and sit, until they blew up their own city with it. Real Men of Genius.

Can we hand Obama over to Lebanon, to be tried for accessory to mass murder?

What’s he got to do with it?

And, when will enough people wake up and demand that Iran be pulverized?

If PDJT wins, Iran will be toast.

you keep on being you islam….