By all appearances, Kevin Clinesmith must be cooperating with investigators. Are there bigger fish about to be snared by prosecutor John Durham? 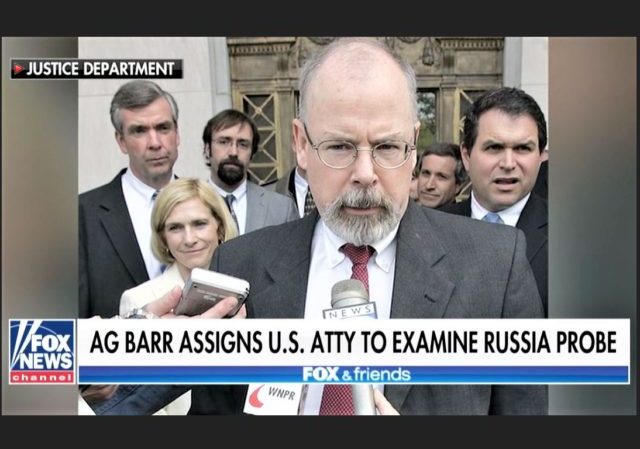 The big news today in the John Durham investigation of was that former FBI lawyer Kevin Clinesmith will be pleading guilty for altering documents in connection with a FISA application to spy on Carter Page.

A former FBI lawyer plans to plead guilty to making a false statement in the first criminal case arising from U.S. Attorney John Durham’s investigation into the probe of ties between Russia and the 2016 Trump campaign, his lawyer said Friday.

Kevin Clinesmith is accused of altering a government email about a former Trump campaign adviser who was a target of secret FBI surveillance, according to documents filed in Washington’s federal court. His lawyer, Justin Shur, told The Associated Press that Clinesmith intends to plead guilty to the single false statement count and that he regrets his actions.

The case against Clinesmith was cheered by President Donald Trump and his supporters as they look to the Durham investigation to lift Trump’s wobbly reelection prospects and to expose what they see as wrongdoing as the FBI opened an investigation into whether the Trump campaign was coordinating with the Kremlin to sway the outcome of the 2016 election.

“The fact is they spied on my campaign and they got caught,” Trump told reporters at the White House on Friday. His political campaign issued its own statement saying “abuses of power” in the Russia investigation “represent the greatest political crime in American history” and everyone involved should be held accountable.

Sean Davis at The Federalist explains the significance of Clinesmith’s actions:

Clinesmith’s deliberate falsification of a federal spy warrant was first revealed last December following a lengthy investigation by the Department of Justice (DOJ) Office of the Inspector General (OIG), headed by Michael Horowitz. Horowitz and his team wrote in a 434-page report that Clinesmith — identified in the report as “OGC Attorney” — altered an email from a separate U.S. federal agency, believed to be the Central Intelligence Agency (CIA), to falsely state that Page had never worked with the CIA to investigate suspected Russia agents operating within the U.S. In fact, as Clinesmith was told by the operative, Page had worked with the CIA previously, as well as with the FBI….

“I’m just devastated,” Clinesmith texted to Moyer shortly after Trump won the presidential election in November of 2016. “Plus, my god damned name is all over the legal documents investigating his staff,” Clinesmith wrote.

“Is it making you rethink your commitment to the Trump administration?” Moyer later asked Clinesmith, ostensibly referring to Clinesmith’s plan to remain at the FBI after Trump’s inauguration.

The charging Information (pdf.) filing was short — only five pages — and contained only a single Count of filing a false document.

That’s not surprising, since we can assume Clinesmith is cooperating with investigators.

A hint in Clinesmith plea. Durham could have indicted on 18 USC §1519, destruction of federal investigative records, which attracts a 20 year max sentence. Instead the plea is to a §1001 “false statements” charge, only 5 years. Suggests Crossfire’s main FBI lawyer is cooperating pic.twitter.com/oeBndPttOP

And if he is, he may know a lot about a lot of people involved in spying on the Trump campaign, transition team, and administration:

Kevin Clinesmith was not a bit player in Crossfire Hurricane.

*He worked with Strzok to arrange sending an FBI agent into Trump-Flynn briefing.
*He was on the Mueller team
*He took part in Papadopoulos interviews
*He was part of FISA process. https://t.co/hJynsJ5jhs

That short filing was used by the NY Times and others to downplay the significance of the filing, emphasizing in the sub-headline to its story: “Prosecutors did not reveal any evidence of the kind of broad anti-Trump conspiracy among law enforcement officials that the president has long alleged.”

Compare this to the hoopla surrounding process crimes in the Mueller investigation, where not a single person ever was charged with election conspiracy, but every person charged with lying to the FBI was treated as proof that Trump was a Putin puppet.

The usual suspects are declaring the Durham investigation illegitimate and a nothingburger.

I’ve been so dissapointed with Republican-led investigations that I’m not hoping for much more.

But let me be very clear what I want to see: James Comey frog-marched in an orange jumpsuit, legs shackled and hands bound at his waste, leading a chain gang of Hillary Clinton, Susan Rice, Samantha Powers, and John Does Nos. 1-13, into the federal courthouse, with the unsealing of an indictment naming mysterious persons “Renegade” and “Celtic” as unindicted co-conspirators.

You can’t take away my dreams.

President @realDonaldTrump on FBI lawyer Kevin Clinesmith pleading guilty to making a false statement, with regard to Durham Probe pic.twitter.com/oeKZveCNsV

Just a couple of thing here.

First, the vast majority of the people who were involved in the Coup were attorneys. Interesting that.

Second, the way the DOJ is structuring these plea deals, makes it very difficult for them too maintain any leverage over the person who accepts the deal. Rather than nail down the testimony of th defendant first, file charges and mount a prosecution on other, bigger fish, before having the defendant granted a plea deal which is usually based on vague “cooperation” of the defendant. This makes one wonder if federal prosecutors are inherently incompetent or if they build these things to allow a defendant to escape justice while protecting the bigger fish. Now the DOJ can point to Clinesmith as being responsible for the fraudulent Carter Page FISA application, while providing cover for the higher-ups involved.

We’ll see just how far this goes. Personally I will be gobsmacked if if any DOJ, FBI or CIA executives are charged. And, nothing will happen to anyone from State.