“Partisan politics aside, this case revolves around one principle: Is someone charged with upholding the law above the law, leaving that person immune from any punishment, even for conduct judged to be illegal?” 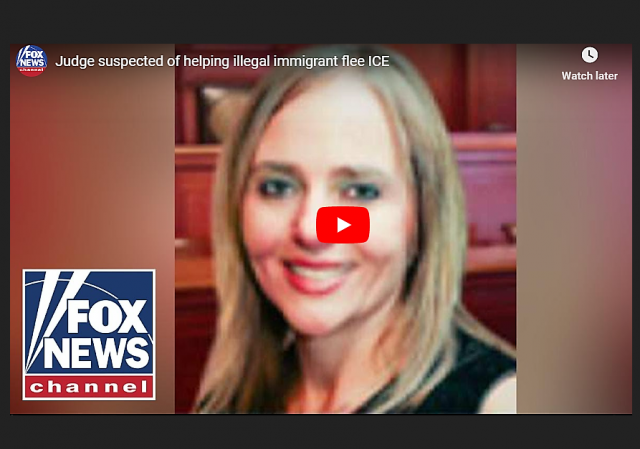 Last year, Kemberlee wrote about a Massachusetts judge, Shelley Joseph, who was indicted for helping an illegal alien evade ICE.  A federal judge has rejected Joseph’s defense team’s motion to dismiss based on Joseph’s judicial immunity, bringing Joseph one step closer to a federal trial.

Joseph faces obstruction of justice and conspiracy charges for her role in the alleged escape.  No trial date has been set.

NBC News reported at the time of the indictment:

A Massachusetts judge conspired with a court officer to help a twice-deported undocumented immigrant slip out a back exit of a courthouse and elude arrest by immigration authorities, according to an indictment unsealed Thursday.

Judge Shelley Joseph and court officer Wesley MacGregor were hit with federal obstruction of justice charges for allegedly aiding the defendant, who was arrested in March 2018 on charges of drug possession and being a fugitive from justice, according to an indictment by the U.S. Attorney’s Office in Boston.

The man, identified as A.S., was allowed to dash out of a rear sally port entrance at the state courthouse in Newton, Massachusetts, on April 2, 2018, after a plainclothes immigration enforcement agent identified himself to the judge and other courtroom personnel, federal prosecutors said.

Joseph’s defense team argued that even if the charges are true, and they claim she had no knowledge of the plan, she is above the law due to judges having judicial immunity for acts “taken in their judicial role.”  A federal judge disagreed.

The case against a Massachusetts state court judge accused of helping a man who was living in the U.S. illegally sneak out of the courthouse to evade an immigration enforcement agent can move toward trial, a federal judge ruled Monday.

U.S. District Judge Leo Sorokin rejected Newton District Court Judge Shelley Joseph’s bid to dismiss the obstruction of justice and conspiracy charges against her. No trial date has been set.

An attorney for Joseph, Thomas Hoopes, declined to comment.

. . . .  Joseph’s lawyers have blasted prosecutors for what the defense has called an “extraordinary sweetheart deal granting complete immunity” to the immigrant’s defense attorney, who they say was the “architect and ringleader” of the man’s escape plan.

Her lawyers say Joseph had no idea about the plan, but they argue that even if the allegations were true, judicial immunity shields judges from liability for acts acts “taken in their judicial role.”

The Boston Herald has more:

In a previous court filing, the government disputes the legal standing of “judicial immunity” in allowing Joseph complete control of her courtroom.

“The government does not dispute that a judge sitting in Newton District Court engages in a judicial act when she orders a criminal defendant to be released from court custody,” Assistant U.S. Attorney Christine Wichers wrote.

“Effecting the release — removing handcuffs, returning property, opening the door, etc. — is not a judicial act.”

Joseph’s actions during the time of the incident raised the feds’ suspicions. Before Jose Medina-Perez escaped, the judge, in a sidebar conversation, instructed an assistant clerk to turn off the court’s recording machine. What followed was a 52-second gap during which prosecutors allege, the judge agreed to let the defendant slip out the door.

. . . . Partisan politics aside, this case revolves around one principle: Is someone charged with upholding the law above the law, leaving that person immune from any punishment, even for conduct judged to be illegal?

Despite thinking she was above the law, the judge may have to play by the same rule as others when it comes to immigration law.

State judge, so none of the above.

Can you name any judges whose campaigns he financed?

State judges start out as attorneys.
George Soros’ Open Society Foundations – to name one of his myriad of politically motivated organizations – provides funds for many left-wing attorneys in the US, as they have done with significant effect in European courts and elsewhere abroad.
Ref: https://aclj.org/human-rights/exposing-conflicts-of-interest-between-george-soros-funded-ngos-and-judges-on-the-european-court-of-human-rights-part-1

Pick a judge and connect the dots. Let me know what you find.

That picture at the top of this article: Chelsea Clinton’s siste

I can’t see the video (too much security/ad blocking software) but I think she’s pretty. On the outside anyway. I’m hoping she’s removed from office and disbarred.

She took an Oath to uphold the Law ,,, she Failed ,,, she’s Fired ,,, put the frosting on the cake and remove her pension for her Illegal Actions !!

acts “taken in their judicial role.”
Well, the whole issue is that the action was NOT within her judicial role. The judicial role is NOT a kingly one allowing judges to simply act on their own feelings and desires toward whatever they feel justice might be. They are required to uphold the law. When they don’t do that, they are by definition not acting in said role.

I hope she sees the inside of the Big Fed Pen for a while. Then you can start hammering other judicial activists the same way.

Misacting is still acting, and a wrongful judicial act, such as ordering a prisoner released, is covered by absolute immunity. That is not at issue here; everyone agrees on it. The question here was whether the other things she did are also covered, and the government prevailed in its contention that they are not judicial acts, and therefore not covered. A judge’s role does not include deciding which exit a former prisoner should use.