Camryn Amy and Olivia M. Winslow face charges that include robbery and endangering the welfare of a child 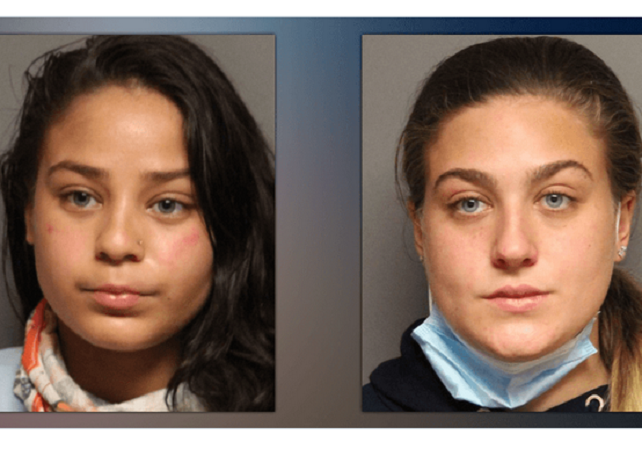 Leftists are so fragile that the mere sight of a Trump hat drives them into a violent, irrational tantrum.  We’ve covered a large number of incidents related to lefties triggered by MAGA hats, even by MAGA hat lookalikes, but the latest is perhaps the hardest to watch because the victim is a 7-year-old boy.

The incident happened near the site of the Democrat National Convention. A mother and son were out supporting President Trump, when two Biden supporters appear to have become enraged by the pro-Trump signs they were holding and by the young boy’s MAGA hat.  The women tore up the signs and appear to have stolen the child’s MAGA hat.

Because he was simply showing his support for President @realDonaldTrump.

Both women have been arrested and charged with robbery and endangering the welfare of a child, among other charges.

The two named Biden supporters, who were arrested and charged for stealing a "Make America Great Again" hat from a 7-year-old boy, were also caught on camera threatening @TrumpStudents activist @KatieDaviscourt and throwing coffee at her.https://t.co/kS9HDph3ez

Wilmington Police have arrested a 21-year-old woman they said assisted in the theft of a 7-year-old child’s MAGA hat outside the Democratic National Convention in Wilmington.

Police arrested Camryn Amy on August 22, 2020, a day after Olivia M. Winslow was arrested and charged in connection to the same incident, which occurred in the 600 block of Justison Street and went viral after a video of the exchange was posted on social media.

. . . . Court records obtained by WDEL report the victim telling police Amy “forcefully” snatched a political sign from her hand while Winslow stole the MAGA hat and handed it to her alleged accomplice. Winslow is also accused of knocking a hat off an adult woman’s head. As the victim’s 7-year-old son went to retrieve the hat off the ground, Amy allegedly attempted to stomp on the hat, but stomped on the boy’s hand, according to statements in court records. The little boy wasn’t hurt, but did begin to cry, police said.

Amy was accused of punching a third victim, a man, in the face, resulting in a small laceration to his lip which caused him “substantial pain” the victim told police in court records. Amy then allegedly threw the MAGA hat over a fence and struck the adult woman in the face with a closed fist, which did not result in injury, court records said.

Amy is facing the same charges as Winslow–first-degree robbery, second-degree conspiracy, and endangering the welfare of a child–along with an additional two counts of offensive touching. She was committed to the Delores J. Baylor Women’s Correctional Institution in lieu of $45,000 secured bond.

If the sight of that little boy crying and repeatedly asking that his MAGA hat be returned was as upsetting to you as it was to me, take heart.  Donald Trump, Jr. says he is making sure the little boy gets a new MAGA hat.

These two need about 10-12 months in the slammer to think about their behavior.

I have said this before…I’ll say it again….

You can’t fight effectively with one hand…
You don’t need “Video Evidence”….SCREW THAT…!!!!!!!

I hope everyone realizes these “demonstration” are not vanishing for YEARS.

In other words, these people are paid rioters in a new, growth industry in America.

Until the money people are prosecuted criminally and sued for damages civilly, get used to Brownshirts Lives Matters.

If Joe and Ho’ are elected, they will be your new police.

The incident happened near the site of the Democrat National Convention.

The Dem convention site was the Wisconsin Center in Milwaukee. This incident happened more than 800 miles away in Wilmington, where Biden and Harris gave their speeches.

When their little property destruction tantrum didn’t go their way, they hit people in the face. On video. More than once. People, not one person.

Yeah, band together to cover the costs of securing redress for mom n kid. But, this is also a splendid oppy for parallel lawfare n P R operations.

– Everybody involved with the tantrum brats gets drug through the grindet. Drove them there – aiding a crime. Gave them the day off – abettimg. Organized the party event, the gathering, the protest – negligance, enabling, n incitement. Hell, go after their mobile providers – persecuters, excuse me “prosecuters” certainly would.

– Meanwhile, how it’s handled through the system becomes its own ongoing story. “DA Nematode charged two women with ‘bad touching’ for hitting a mom who demanded tbeh return her kid’s hat they had taken. The operative in govt probably thought that was on-point, their being Biden supporters – everybody.does, you know, the thing. Besides tbey were just acting out Democratic party polich: wbat’s yours is theirs.”

Didn’t somebody famous say: ” Punch back twice as hard?”