They discuss a wide range of subjects including sports, Black Lives Matter, the riots, the economy, the election, the stock market, Twitter, and the Coronavirus pandemic. 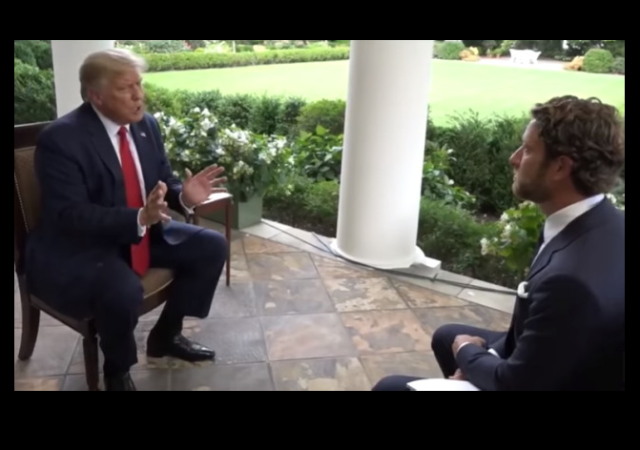 Dave Portnoy of the tremendously successful ‘Barstool Sports’ did an interview with President Trump this week which is going viral for obvious reasons.

I don’t know how Portnoy secured this interview, but it’s one of the best interviews of Trump in years.

Portnoy is downright impressive. He is completely confident yet respectful, and he puts Trump at ease. Trump smiles and laughs more during this interview than he seems to have in the last four years.

They discuss a wide range of subjects including sports, Black Lives Matter, the riots, the economy, the election, the stock market, Twitter, and the Coronavirus pandemic.

Joseph A. Wulfsohn of FOX News provides some details:

President Trump sat down for a candid interview with Barstool Sports founder Dave Portnoy to discuss sports, Twitter and the coronavirus outbreak.

Portnoy began the interview by praising Trump for being the only one to “sniff out” the prank during his appearance on Sacha Baron Cohen’s “The Ali G Show.”

“You’re right, I was the only one — I said ‘this guy’s a total fraud’ and I left… You’re the only that has given me credit for that!” Trump told Portnoy.

Portnoy pivoted to the president’s past disapproval of kneeling protests during the national anthem as well as the recent protests that have taken place in cities across the country, asking him “what would you do” to show displeasure with the country.

“Well, I mean you can always say you can run for office, right? You become successful, you can run for a lower office, you can do things,” Trump responded. “But there are ways, you can get groups together and there can be friendly ways of doing it, very successful. You’re gonna have rebounds, negative rebounds if it keeps up the way it is.”

Trump defending sending “tough people” to Portland, which has been widely criticized.

Allison Schuster of The Federalist outlines some of the sports talk:

Affectionately known as El Presidente, Portnoy has always avoided siding with either mainstream political party. Although he speaks his mind, his political interest hasn’t appeared to be strictly right or left leaning. He has made frequent appearances on Fox News’ “Tucker Carlson Tonight,” attracting enemies on the left who accuse him of having a right-wing bias. He has said on air, however, that he will appear on any channel that will have him.

El Presidente began the interview in typical Barstool fashion, setting a light-hearted tone from the onset of the approximately twenty-minute meeting. The two naturally focused partially on sports, as the interview took place on the same day as the nation’s return of Major League Baseball.

Barstool followers are very familiar with Portnoy’s history with Goodell, tracing back to 2015 when the El Pres made his disagreement with the NFL’s “Deflategate” controversy public. Trump poked fun at Goodell’s fashion sense, referencing his recent move to don a tight-fitting t-shirt rather than a suit in a publicity stunt from earlier in the summer.

“Number one, he could have waited till at least the fall. But, more importantly, I would have worn a suit, or a tie, or even an open shirt that’s loose, not tight. So he came out with this thing, Dave, and everyone said where did this come from, now? And the whole big thing started. And he’s made a mistake,” the president said.

Portnoy, an internet celebrity with more than 1.6 million followers on Twitter, set the president at ease reflecting on his pre-presidency life as a popular TV host and businessman.

“I was in so many rap songs. Like 79 or something — I was in every rap,” Trump told Portnoy.

“The best day in my life, in terms of business and life and everything, the day before I announced [a run for president in 2015], everything was good,” Trump said.

Trump, who is known for rarely admitting mistakes, confessed to Portnoy that he “too often” regrets his tweets, especially his retweets of shady characters.

“You know, it used to be in the old days before this, you’d write a letter. And you say this letter is really good. You put it on your desk and then you go back tomorrow and you say, ‘Oh, I’m glad I didn’t send it’, right? But we don’t do that with Twitter,” the president said.

Portnoy concludes the interview by surprising his father with a face call with President Trump. It’s funny and lighthearted, even though Portnoy mentions that his dad is not a Trump fan.

This was great because it gave President Trump an opportunity to do a relaxed and fun interview without the interference of the traditional media. He would be wise to do more interviews of this kind.

Set aside 20 minutes today and watch this whole thing:

What a great interview! This is the Trump the Leftist media wants to keep hidden from us. I’m sure the takeaway will be that Trump shook hands and didn’t socially distance. Everything in the middle was gobbledygook. (I always wanted to use that in a sentence)

Talking with a human being who treats you like a fellow human being — instead of a cardboard bogeyman to projectile vomit ideological fears and loathings onto — could only have been refreshing.

That’s actually the Trump personality that always comes through for people who can read him. Which is mostly not women.

As a retired lady principal engineer I disagree with this statement. I have ZERO problem understanding his positions. I agree with 95% of them. I enjoyed the interview.