“Their story about where we live is slated to run the paper this week. Editors there know exactly what will happen to my family when it does run. I called them today and I told them. But they didn’t care. They hate my politics.” 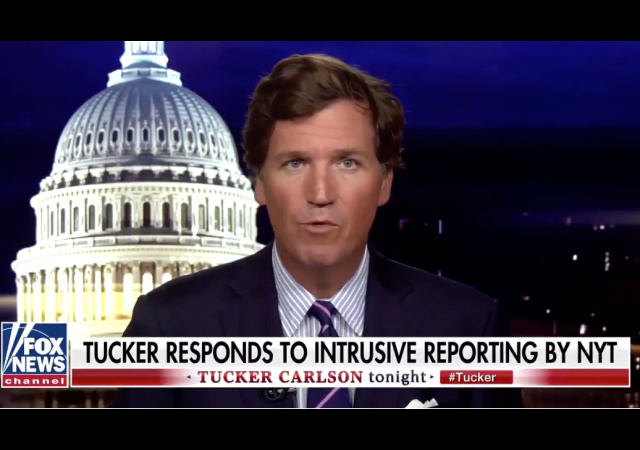 Tucker Carlson told his audience on Fox News that The New York Times plans to publish the location of his house.

He claims the publication wants to do this to injure his wife and kids to make him “shut up and stop disagree[ing] with them.”

Carlson moved his family in 2018 after an ANTIFA mob attacked his house while he was on the air. His wife locked herself in the pantry and called 911. Luckily their four kids were not at home.

The Daily Wire has the transcript:

One more thing before we go tonight. Since this show began almost four years ago, I’ve really tried not to talk about myself on the air or even use the first-person pronoun. The last thing this country needs is more narcissism. It’s not very interesting anyway.

People who use the word “I” a lot tender for everyone but themselves but tonight were going to make an exception to that rule. We don’t have much choice. Last week The New York Times began working on a story about where my family and I live. As a matter of journalism there is no conceivable justification for a story like that. The paper is not alleging we’ve done anything wrong and we haven’t. We pay our taxes. We like our neighbors. We’ve never had a dispute with anyone.

So why is The New York Times doing a story on the location of my family’s house? Well, you know why. To hurt us, to injure my wife and kids so that I will shut up and stop disagree with them. They believe in force. We’ve learn that. Two years ago, a left-wing journalism was publicized our home address in Washington. A group of screaming antifa lunatics showed up while I was at work. They vandalized our home. They threatened my wife. She called 911 while hiding in a closet. A few weeks later they showed up again at our house. For the next year, they sent letters to our home threatening to kill us. We tried to ignore it and felt cowardly to sell our home and leave. We raised our kids there the neighborhood and we loved it. But in the end that’s what we did. We have four children. It just wasn’t worth it.

But The New York Times followed us. The paper has assigned a political activist called Murray Carpenter to write a story about where we are now. They’ve hired a photographer called Tristan Spinski to take pictures. Their story about where we live is slated to run the paper this week. Editors there know exactly what will happen to my family when it does run. I called them today and I told them. But they didn’t care. They hate my politics. They want they show off the air. If one of my children gets hurt because of a story they wrote, they won’t considered it collateral damage, they know it’s the whole point of the exercise: To inflict pain on our family, to terrorize us, to control we say. That’s the kind of people they are.

They’ll deny this of course, they’ll it’s just journalism, just the facts. Really? So, how would Murray Carpenter and his photographer Tristan Spinski feel if we told you where they live, if we put pictures of their homes on the air? What if we publicized the home address of everyone of the soulless robot editors at The New York Times who assigned and manage this incitement to violence against my family? What about the media editor, Jim Windolf? We could do that. We know who they are. Would that qualify as journalism? We doubt they’d consider it journalism. They’d call it criminal behavior if we did it and that tells you everything.

“While we do not confirm what may or may publish in future editions, The Times has not and does not plan to expose any residence of Tucker Carlson’s, which Carlson was aware of before tonight’s broadcast.”

If push comes to shove, I will loan Tucker Carlson my backhoe.

Know anyone with a cement truck?

I know people with trucks, but they are made out of metal and plastic. A cement one would be very heavy. /sorry. had to…

Tucker doesn’t have it in him! His on air whimper last night showed us and his adversaries exactly what he’s made of

What whimper? It was a threat, and it worked.

The photog doing the grunt work for JYT:
https://www.govcb.com/government-vendors/profile-SAM00000000001523960-tristan-spinski-South-Portland-ME.htm

one in belfast is about 30 miles (as crow flies) from me. to see how bad it is up here read the comments. funny how SOME commentators NEVER have stuff removed while myself and others often do.

In my opinion, I see nothing but EVIL on the left, every day. You never hear about conservatives attacking people, looting stores, tearing down monuments, and statues or burning businesses to the ground ! These are ALL carried out by LIBERALS. Michael Savage was RIGHT, when he said that “Liberalism is a Mental Disorder”, because it IS ! These people are SO evil, that they want to hurt a good man, and his family simply because they don’t agree with his politics. These people are despicable, obnoxious people for even threatening to expose his home location !

The only saving grace here is that, since it is the NYT, the address with likely be incorrect.