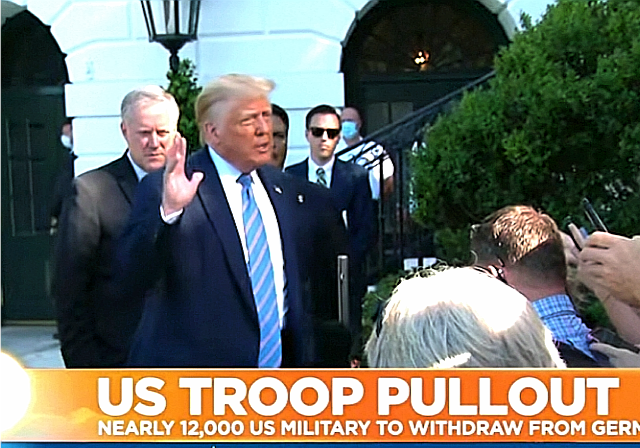 U.S. President Donald Trump has angered many German politicians and media commentators with his decision to withdraw nearly 12,000 troops from Germany. Defense Secretary Mark Esper laid out the plan on Wednesday.

Under the proposed pull-out, close to 6,400 troops will return to the U.S. and another 5,400 redeployed within Europe.

The withdrawal plan presented by Esper foresees more significant cuts than expected. The current pull-out of 12,000 troops amounts to a third the 36,000-strong U.S. military contingent in Germany, the Wall Street Journal, and other U.S. news outlets reported. The U.S. is also relocating its European military command from Stuttgart, Germany, to Mons, Belgium.

The U.S. decision comes after Chancellor Angela Merkel’s government repeatedly reneged on the promises to pay two-percent of the NATO defense spending. Berlin is “delinquent” in its defense contributions, President Trump told reporters on Wednesday.

Germany pays Russia billions of dollars a year for Energy, and we are supposed to protect Germany from Russia. What’s that all about? Also, Germany is very delinquent in their 2% fee to NATO. We are therefore moving some troops out of Germany!

German media made much about the opposition to the withdrawal plan in the Democrat-controlled House of Representatives.

“The resistance [to the move] has already built up among Trump’s own Republicans and Democrats,” German state broadcaster Deutsche Welle claimed.

They also pinned their hopes on a Joe Biden victory in the coming presidential election. Biden campaign promised a ‘review’ of the troop relocation if their candidate wins in November. German newspaper Nürnberger Nachrichten gleefully reported: “If Trump loses the election, the plans can be put on ice.”

Chancellor Merkel’s possible successor in the ruling Christian Democratic Party, Friedrich Merz, called it a “renewed wake-up call Europe.” In recent years, many EU and German politicians have toyed with the idea of a centralized European army.

Bavarian Prime Minister Markus Söder criticized the US withdrawal plan, adding that it served no clear military purpose and would even weaken the NATO alliance and the US itself.

“Unfortunately, this puts a burden on the German-American relationship,” Söder said.

“We are now waiting to see if the decision will last,” he added, in reference to the US presidential election in November.

Last week, Söder had joined the state premiers of Baden-Württemberg, Hesse and Rheinland-Palatinate in a letter to members of the US Senate and Congress pleading for a stop to the plan, saying the troops formed “the backbone of US presence in Europe and NATO’s ability to act.”

“We therefore ask you to support us as we strive not to sever the bond of friendship but to strengthen it, and to secure the US presence in Germany and Europe in the future,” the German politicians said.

Green party opposition politician Jürgen Trittin, who sits on the foreign affairs committee in parliament, told DW he believed the real motivation was not military or defense policy: “It’s more a part of the economic warfare Donald Trump is fighting against the European Union and especially the Germans,” Trittin alleged, calling for Germany to cancel plans to purchase new F-18 fighter jets from the US in response.

Most of the troops who will leave are stationed in southern Germany.

“Stuttgart will feel the loss of American purchasing power,” the Lord Mayor of the southern German city Fritz Kuhn noted, pointing to the absence of U.S. military and civilian employees in the future.

Aiming at the U.S. leader, he added: “U.S. president doesn’t care much about diplomatic customs and — allow me to say — he doesn’t understand much of it.”

Bavarian politicians at the city and municipal level are “hoping for a Trump defeat” in the U.S. presidential election, Die Süddeutsche Zeitung reported:

“If [the withdrawal] takes place, it will be very troubling for the region,” the mayor of Vilsecks Hans-Martin Schertl was quoted in the [local newspaper] Gruppe Oberpfalz-Medien. (…)

The hopes are rested on the election day in the U.S.; if President Donald Trump loses, the chances are great that the withdrawal plans will be shelved. His counterpart in the neighboring Grafenwöhr also believes that. According to mayor Edgar Knobloch in a city of 6500, more than 10000 soldiers are stationed. He too stresses the enormous economic factor connected to the troop presence in the region. [Bavaria’s] state premier Söder says that the decision will strain German-US relations and hit the local communities hard. “We will wait and see if the decision is a permanent one.” (Translated by the author)

Washington’s decision comes as Berlin depletes its military preparedness. A 2019 German parliamentary report found that “less than 50 percent of the Bundeswehr tanks, ships and aircraft were available at any one time.” In recent years, Chancellor Merkel’s government has been busy converting military barracks into migrant housing and running re-education programs for its top military brass on gender and sexuality.

While Germany refuses to pay its agreed share year after year, U.S. taxpayers are left to shoulder the lion’s share of NATO budget. The U.S. accounts for 70 percent of the combined defense spending within the NATO alliance, latest figures show.

Can’t we just send David Hasselhoff over there to protect them?

If Russia were to invade Turkey from the rear, do you think Greece would help?

“Bavarian Prime Minister Markus Söder criticized the US withdrawal plan, adding that it served no clear military purpose and would even weaken the NATO alliance and the US itself.”

Actually, Germany has spent years weakening the NATO alliance by being lax on paying their dues; Trump called them on it. Now, here’s Germany’s wake-up call: The United States is NOT your personal police force. It is not NATOs police force. NATO is a UN construct. The Germans want protection. Guess what? You’ve already disarmed your own people; learn to protect yourselves.