“How would I respond if a Dreamer who lived down the hall from me came up to me and told me she didn’t feel safe or comfortable with my views and me being on campus.” 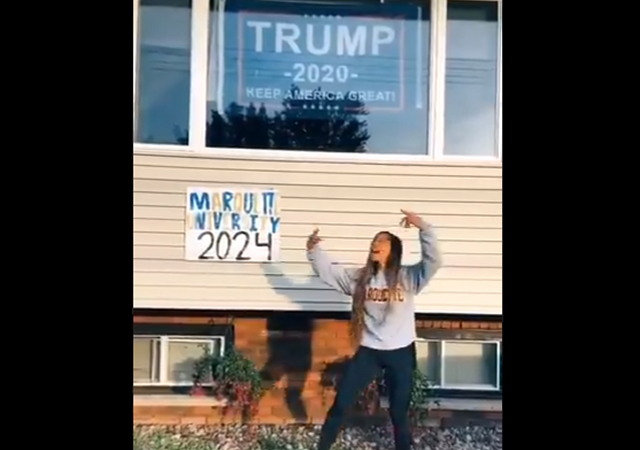 Samantha Pfefferle made a video expressing her support for President Trump on the social media network TikTok. This led to a campaign to get her admission to Marquette University rescinded.

The school has not rescinded her admission, but they did ask her some crazy questions about her views.

Soon to be Marquette University freshman Samantha Pfefferle has yet to even step foot on campus, yet she said she is already facing possible dismissal from the school.

The threat to cancel Pfefferle’s admission came after she posted a video to her account on the popular social media site TikTok showing her support for President Donald Trump.

The video, titled “When the libs find their way to your page,” lists captions such as “When people see that I support Trump,” “Then try to hate on me,” and “And think I’ll change my views,” over a video of Pfefferle dancing.

Pfefferle’s post has been watched nearly 600,000 times and has since caught the attention of the Marquette community, some of whom began harassing Pfefferle. Others threatened her life.

“I hope you get shot,” one commenter told Pfefferle. “I’d pray for you but you’re not worth it,” another user added.

The questions presented to Pfefferle by university officials are astounding:

Some Marquette administrators also asked Pfefferle a series of questions meant to judge her morals, she said.

“They also asked me hypothetical questions regarding Dreamers,” she said. “How would I respond if a Dreamer who lived down the hall from me came up to me and told me she didn’t feel safe or comfortable with my views and me being on campus. They also asked me if they thought there was anything I could do to improve my image on campus. They proceeded to ask if I was comfortable with the reputation I have established for myself. The assistant dean asked if I put any thought into the response I would be getting from my videos.”

The implication here is unmistakable. The mere presence of a student who supports Trump is a threat to some students. This would never happen to a college student who supported any Democrat, no matter how extreme their beliefs, and it’s unacceptable.

Take a look at Pfefferle’s video and see if you find it threatening in any way:

Leftists are trying to get a girl kicked out of @MarquetteU because she did a video supporting @realDonaldTrump. School administrators called and asked how she‘s respond if a "DREAMER" told her they didn’t feel safe because of her support for Trump. Insane!pic.twitter.com/qXm3HfEUFl

Per Jackson Walker at The College Fix, an Instagram user created a copy-paste email template for people to send to Marquette:

Ms. Pfefferle has been very vocal on social media (TikTok, Instagram) about how she is enthusiastic about coming to Marquette in the Fall. As a Marquette student who is passionate for the University’s core values, such as Cura Personalis, and recognizing everyone’s human dignity, these transphobic, racist, and xenophobic comments should not be tolerated.

These comments made by Ms. Pfefferle were shared publicly, and were clearly presented as mocking jokes. Ms. Pfefferle is obviously proud of her statements, as she stands behind her words in every post.

These comments create and perpetuate an unsafe space for the LGBTQ+ community, first generation students, and Dreamers at Marquette.

Samantha Pfefferle is proud of her transphobic and xenophobic opinions, which under no circumstances should be allowed at Marquette. The University can and should make it their priority to ensure students (specifically LGBTQ+, immigrants, first gen, and POC) feel safe, valued, and appreciated on campus.

This effort on the left has been building over three years. They are trying to establish the idea that supporting Trump makes you unacceptable as a human being.

They believe that anyone who would support Trump is automatically a bigot, and therefore should be punished through exclusion from participation in education and even employment.

The College Fix article ends with an update indicating that Marquette has not rescinded Pfefferle’s admission, so the campaign against her has failed for now, but the fact that this even happened is outrageous.

The first thing she learned from this college is never use any asocial media. She also learned that they have nothing to offer her.

There are just a few “Catholic” colleges that are Catholic.

Trump is the most pro life president ever.

These alleged Catholic schools think killing babies, birth control, and updating the Church’s teachings to what they should be in a modern world are all OK.