“We’ll examine our complicity in the system of white supremacy … and begin to cultivate practices that enable us to … show up more fully as allies and accomplices for racial justice,” read the whites-only email invite. 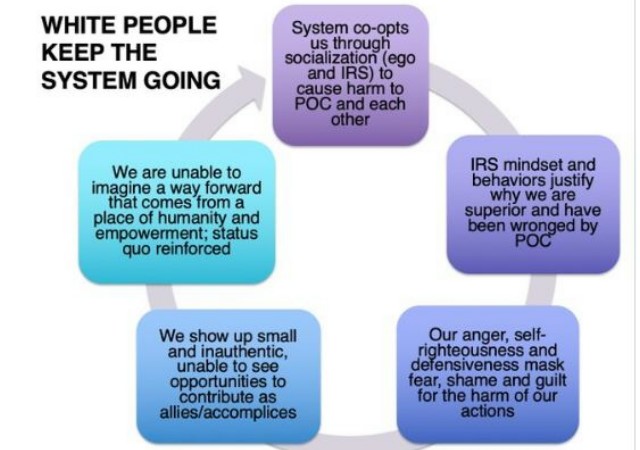 Dr. Karlyn Borysenko, a liberal who was mugged by reality in February after she attended a Trump campaign rally in New Hampshire, first reported a few weeks ago that the City of Seattle was holding a training session on “Interrupting Internalized Racial Superiority and Whiteness:”

Fun fact: The city of Seattle is asking its white employees to voluntarily spend their day off in a training about their internalized racial superiority. I’ve got the documentation on it.

Along with announcing it on Twitter, she included a copy of an email from someone who works for the city who received an invite to participate in a whites-only session in which attendees would “examine our complicity in the system of white supremacy … and begin to cultivate practices that enable us to … show up more fully as allies and accomplices for racial justice.” Read the full email below:

Dr. Borysenko also posted a 30-minute video last month in which she detailed the training documents she’d gotten her hands on. Watch below:

In response, the Discovery Institute’s Wealth and Poverty Center director and City Journal contributing editor Chris Rufo requested public records to find out more about the training presentation. Once he got his hands on the documentation, he posted an eye-opening Twitter thread on some of the specifics that should alarm everyone regardless of political affiliation:

If white employees speak too much, that was a sign of racism:

Sometimes both sides of the coin are “oppression.”

Are white employees speaking too much? That’s probably the internalized racial superiority of “imposition” or “paternalism.”

Are white employees speaking too little? That’s oppression, too, because “silence” is “violence.”

Next up for white employees was practicing “self-talk” to convince themselves of their alleged “complicity in racism” – to “undo your own whiteness:”

The City of Seattle diversity trainers encourage white employees to “practice self-talk that affirms [their] complicity in racism” and work on “undoing your own whiteness.” pic.twitter.com/CJxNEcIeh2

Then there was the supposed need to “let go” of certain things like “guaranteed physical safety” and “social status” and the “certainty of your job:”

What happens after the thought exercises? It’s time to DO THE WORK.

The trainers ask white employees to “let go” of “comfort,” “guaranteed physical safety,” “control over the land,” “social status,” and “relationships with some other white people.” pic.twitter.com/sRZf8gA6Go

Next was the flow chart:

Then they go through a flow chart that outlines how white people “cause harm to POC,” “show up small and inauthentic,” and are unable to access their “humanity.” pic.twitter.com/jcJppWXe0k

What happened if an employee didn’t “identify” as white but was not black? Too bad – they were still considered white and privileged, according to the group’s “Assimilation into Whiteness” datasheet:

In case some people are wondering if they’re “really white,” they pass out a datasheet called “Assimilation into Whiteness.”

Are you of Arab, Jewish, Finnish, German, Italian, Armenian or Irish descent? You’re definitely white. No getting out of this. pic.twitter.com/mqsCUB9Ijr

Here are the metrics for gauging “training” effectiveness:

How do you know when you’ve successfully “interrupted your whiteness”?

–When you “implicate yourself” in racism.
–When “other white people may be angry.”
–When you have stopped your “white normative behavior.” pic.twitter.com/7Pv5FvRxm1

Rufo went on to note that “the City of Seattle has refused to provide the names of the diversity trainers, the budget for the program, or the video of the session” because apparently city leaders consider transparency and accountability as optional things.

He ended his thread by advising people to reject and expose this type of cult-like indoctrination anytime they saw it:

As @ConceptualJames and others have shown, the new cultural revolution is being fought via corporate HR, city diversity training, and public school curriculums.

When you find something like this in your community, expose it, criticize it, mock it, and reject it. /End

I’m so glad I retired years ago. So is The Bride.
.