Didn’t take press long to connect the infection to Trump’s Tulsa rally, while ignoring the state’s flat, flat curve and the “surge” in recoveries! 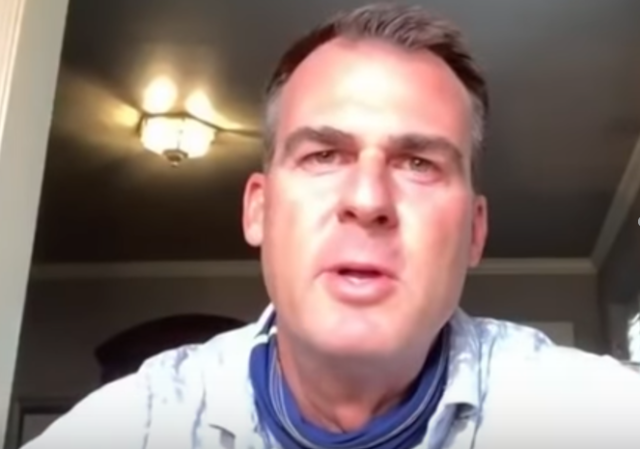 “I personally get tested periodically throughout this whole thing,” Stitt said. “I got tested yesterday for COVID-19 and the results came back positive.” The governor was first tested for COVID-19 on June 18 ahead of an event at the White House.

Stitt said he is feeling fine, despite minor aches. He has not developed a fever. He plans to work from home and self-isolate from his family and others until the state’s top health official recommends otherwise.

Stitt attended Trump’s controversial campaign rally in Tulsa on June 20. Health officials there said the rally “more than likely” contributed to a surge in coronavirus cases.

“The past two days we’ve had almost 500 cases, and we know we had several large events a little over two weeks ago, which is about right,” Tulsa Health Department Executive Director Bruce Dart said on July 9. “So I guess we just connect the dots.”

At least eight Trump campaign staffers who attended the rally in Tulsa later tested positive for the coronavirus, according to CNN.

The coverage also connected the infection to Oklahoma’s robust reopening plan and reliance on personal choice:

…Stitt said he would be working from home until it was safe to ‘get back to normal’.

However he still refuses to issue a mandate that requires wearing a mask in public and just asks that people follow a business’ orders if they require face protection.

‘We respect people’s rights … to not wear a mask,’ Stitt said during Wednesday’s news conference, which was held virtually. ‘You just open up a big can of worms.’

He said it would be difficult because someone’s mask may slip down below their nose or they may not be able to wear an N95 mask.

‘A lot of businesses are requiring it, and that’s fine. I’m just hesitant to mandate something that I think is problematic to enforce,’ he said about face coverings.

‘I know that some businesses are mandating masks and that’s great. But you can’t pick and choose what freedoms you’re going to give people.

Right on cue, the Tulsa rally was followed with reports on case numbers showing the case totals…which, of course, can only go up.

With 1,075 new cases reported Wednesday, the Oklahoma State Department of Health says there have now been a total of 22,813 coronavirus cases confirmed in Oklahoma since the pandemic began.

This is a new single-day high for the state. The previous record was set with 993 new cases, reported by the state on July 14.

There were four new coronavirus-related deaths reported in Creek, Kay, Oklahoma, and Tulsa counties, bringing the state’s death toll to 432.

What most reports fail to leave out are facts such as the age of the four who succumbed to the infection, who were at the high-risk age of over 65.

The coverage also leaves out how truly flat Oklahoma’s curve really is, or the “surge” in the number of recoveries. 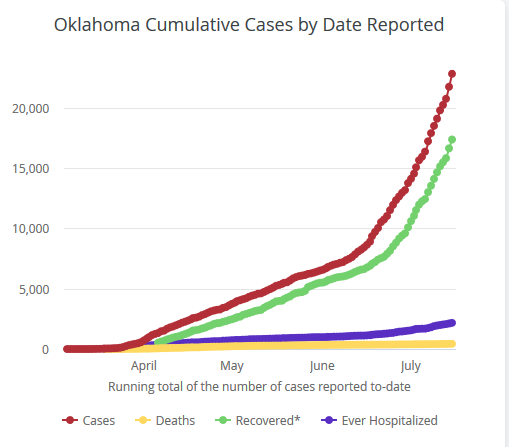 I wish Gov. Stitt and his state a speedy and robust recovery.

Isn’t it amazing how Republicans who catch COVID today are subject to a hundred times the social acrimony of gays who caught AIDS in the ’80s and ’90s?