When asked about why he escaped to the South, my grandfather would reply, “I wanted to be free to worship God.” 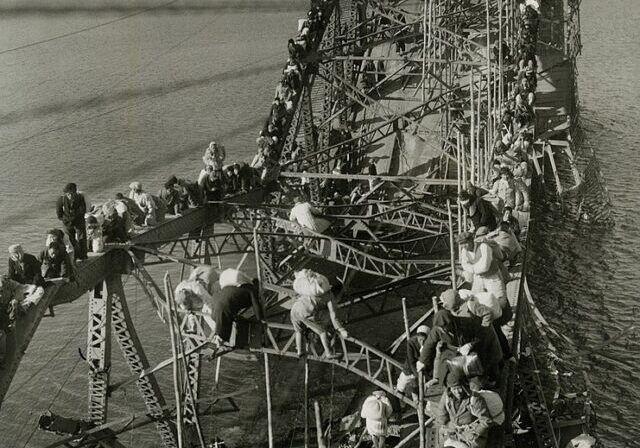 On June 25, 1950, North Korean troops crossed the 38th parallel to invade the fledgling democratic south. Amidst changing borders, victories, and defeats, hundreds of thousands of Koreans from the North escaped to the South in the hopes of finding freedom.

Two of these refugees were my grandfathers.

My maternal grandfather grew up in Pyongyang (the modern-day capital of North Korea), during its occupation by Imperial Japan. In his early years, he attended a high school founded by Christian missionaries. At the outbreak of the Korean War, my grandfather and his siblings were forced to flee, leaving their parents behind. During his perilous journey to the South, my maternal grandfather lost contact with his siblings, most of whom he never saw again. Near the end of his life, he was reunited with his sister, from whom he was separated for more than forty years. He was never reunited with any other members of his immediate family. When asked about why he escaped to the South, my grandfather would reply, “I wanted to be free to worship God.”

My paternal grandfather was an industrious man. Born in the Jeolla province during the Japanese occupation, he traveled to Manchuria to seek work and support his family. After working in manufacturing, he migrated to Russia, Japan, and, eventually, what is now North Korea. During this time, he taught himself to be proficient in Korean, Japanese, Russian, Chinese, and English. Just before the war broke out, he worked in a fertilizer factory in the city of Hamhung, which is still in operation today. Having heard that communist troops were approaching, he joined other refugees to escape to South Korea. When asked why he chose to escape, he said, “The communists wanted to shut down factories and businesses. I want to live in a capitalist society.”

Growing up, I heard my grandfathers’ escape stories from my parents and grandmothers. My maternal grandfather recounted one time when he was fleeing North Korean troops and heard a voice telling him, “Leave the group! Come behind the bushes!” Grabbing one of his family members, he ran behind the bush and hid, listening to the shrieks of innocent civilians being slaughtered by communist forces. Another time, my maternal grandfather’s life was saved by the thick, family Bible he was carrying.

Similar stories of violence and brutality are shared by other refugees, who said that communist soldiers would single out Christians and publicly humiliate, torture, and kill them. These experiences are captured in the 2010 South Korean film, “One Step Forward.” Even today, according to the non-profit group, OpenDoorsUSA, “If North Korean Christians are discovered, they are deported to labor camps as political criminals or even killed on the spot.”

The effects of the “proletarian revolution” were not limited to the Korean peninsula. Some of Karl Marx’s stated goals for the socialist revolution outlined in The Communist Manifesto were to abolish property in land, abolish rights of inheritance, and confiscate the property of “rebels” or counter-revolutionaries. To realize this massive forced transfer of wealth, socialist revolutionaries often resorted to compulsory re-education and mass executions.

In Maoist China, 200,000 to 800,000 farmers were systematically executed, while millions were sent to labor camps, according to Frederic Teiwes’s book Establishment of the New Regime. In Vietnam, 13,500 farmers were executed from 1954-1956. The number of those executed by the “vanguard of the socialist revolution” does not even include the 3.2 million people who starved to death during the Ukrainian famine, the 45 million people who died in the famines during Mao’s “Great Leap Forward,” and countless millions who perished due to the failure of socialist state policies.

Disturbingly, despite the plethora of historical examples of socialist brutality, similar behaviors and ideologies are emerging in America’s left. Many of our leaders, like Representative Alexandria Ocasio-Cortez (D-NY) and Senator Bernie Sanders (D-VT), are calling for an unprecedented redistribution of wealth. Others, like media pundit Chris Cuomo, are justifying the immoral theft and anarchic destruction of private property in the name of racial justice. Meanwhile, minority business owners like Lucy Hosley, who worked their whole lives to honestly achieve the American Dream, bear the costs.

This past Saturday, Lilith Sinclair, the leader of Portland Black Lives Matter, stated the group was “organizing not only for the abolition of the militarized police state but also the abolition of the United States of America as we know it.” These Marxists not only demand the abolition of the police whom minorities want to protect their communities, but also wish to erode the protection of private property, freedom of thought, and religious liberty. For centuries, these core values have motivated millions of people to come to America and gave them the security to innovate, work, and prosper.

It is not easy to succeed in a capitalist society. The experiences of my grandfathers demonstrate that, while difficult, achieving this success was possible through determination and ingenuity. After the Korean War, my maternal grandfather started a small business, as a craftsman and mechanic, manufacturing water valves and even making furniture for the Korea University Law School. He also served as an elder at YoungAhm Presbyterian Church. My paternal grandfather took on all sorts of jobs to ensure his family was taken care of. He owned a bicycle shop, made Western clothing as a tailor, and tended his land as a farmer. Neither of my grandfathers retired. Both of them worked hard each day, knowing that capitalism would allow their children and grandchildren to pursue greater ambitions.

There are clear challenges and problems our nation must deal with. And of course, we will have to work to ensure that all Americans have the opportunities to succeed. However, socialism is not the solution. Socialist revolutions have deprived millions of people of their basic freedoms and opportunities to succeed. Capitalism, on the other hand, has allowed me, the grandson of two war refugees, to immigrate to this country, attend Cornell University, and tell the story of two remarkable men who fled murderous oppression in pursuit of freedom.

Samuel Kim is a rising sophomore in the School of Industrial and Labor Relations at Cornell University. He is the current Managing Editor of The Cornell Review where this article originally ran.

A dear friend of mine was also born in Pyongyang and escaped about the same time. He joined the South Korean Army and after the Korean War came to the United States. He came legally and became an awesome citizen. He was a businessman extraordinaire along with his beautiful wife. He died a few years ago and I think of him and his wife often. These are the kind of people we want in our country, not the third world ignorant, violent trash that Oshitbag flooded our country with.