They claim they want “unity,” but what do they mean by that? 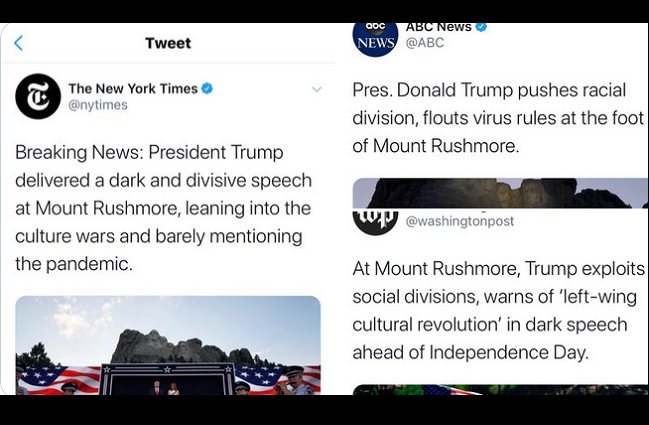 When I saw the overwhelming number of headlines proclaiming President Trump’s Independence Day speech at Mount Rushmore “dark,” “divisive,” and “harsh.”  I smiled a little.  Okay, I smiled a lot.

Trump “stokes national divisions” and his speech was “dark and divisive,” they proclaimed as one.  Even if I hadn’t already listened to the whole thing, I would have suspected that they are protesting too much and that it’s most likely due to their fear that the anti-American violence and destruction is not going to play well with voters in November.

Here are just a few of the more hysterical headlines:

this is straight up gaslighting. the media picks a narrative and runs with it. pic.twitter.com/3N1MFim0QJ

Obviously, at least to anyone who heard or read the speech without their Trump Derangement cranked up to fifty-eleven, the president did just the opposite.

President Trump’s unyielding push to preserve Confederate symbols and the legacy of white domination was crystallized by his harsh denunciation of the racial justice movement Friday night at Mount Rushmore.

Of course this is utter garbage. And AG was happy to help them out.

This is vile. I've read that speech 4 times. It explicitly and repeatedly rejected racial divisions. It didn't once refer to confederate symbols.Trying to portray a defense of American ideals this way isn't an insult to Trump, it's an insult to Americans who hold those beliefs.

Here was WaPo's description vs the actual speech.

They randomly took words without context and assigned them as descriptors "racial justice protesters" when those descriptions weren't even referring to protests. pic.twitter.com/teF0AsQc6v

And Mollie Hemingway said what we are all thinking:

It is genuinely disgusting to see you lying like this. Have you no integrity? None?

Frankly, there is only one way to unite Americans, and it’s the same way we did for generations before the Marxist scourge took over academia and the Democrat Party: as Americans.

The left, however, appears to have a goal of unity that they are shoving down voters’, politicians’, and the president’s throats.  Their idea of “unity” is the same “unity” Democrats, socialists, communists, and assorted totalitarians and dictators always want: complete submission to their iron-fisted tyranny.

Here’s an NBC “contributor” waxing her own special brand of “unity” and noting that the president’s goal didn’t seem to be meet her and her horde’s definition.

Many supporters liked this speech, but uniting a divided country did not seem to be its goal. https://t.co/ChWaVPiVRI

And people had thoughts.

Just as dividing a country, rather than informing it, seems to be the goal of many in mainstream press. Trump’s speech was needed. It’s sad that some can’t unify over cancel culture. https://t.co/OSxZTMWZq6

Does the anti-America left want to be united with the rest of the country?

The leftstream media are clearly unified in their hatred of Trump, his supporters, and if they believe as those they run interference for, of America herself.

But this barrage of unfounded, dishonest criticism of the president’s speech suggests, to me anyway, that they are very concerned that the violence and destruction will not serve their chosen candidate well when it comes time for voters to reflect on the riots, destruction of monuments and statues, arson, looting, and assorted lawlessness Democrat leaders have permitted, even exalted.

As soon as I saw leftist media use the words “dark and divisive” I knew Trump had scored a home run.
He hit them where they’re vulnerable, and they know it.

Kick a pile of secondhand Alpo. Enjoy the aroma and the cloud of flies. This is the left wing media.
.

Our country is under attack from radical leftists. Mobs rampage through our streets, monuments are being destroyed, and the very law and order that ensures our communities’ peace and security is being undermined. In far too many instances, those bent on destruction have hijacked protests, creating violence and division and ultimately attacking the very foundation of our nation. For them, it’s not about resolving race issues; it’s about using racial discontent to forward their anarchist agenda like Antifa. While it is widely recognized as a far-left fringe group, another organization—just as radical—has managed to drape itself in more mainstream smokescreen called Black Lives Matter (BLM). The organization actually advocates an agenda that is completely out of step with American values. One look at the BLM organization’s website shows that the idea of protecting black lives and seeking justice is merely a vehicle to advance a different, radical set of ideas. The organization is more dedicated to gaining political power and remaking America according to Marxist ideology. The group’s platform includes planks unrelated to improving black lives, like calling for dismantling the family, saying, “We disrupt the Western-prescribed nuclear family structure.” The breakdown of the black family and the rise of single-parent households is one of the root causes of poverty, crime, drug abuse and poor educational achievement in many black communities. Why would anyone who’s supposedly working for black progress want to tear down the very thing that helps to achieve it?
Just as disturbing is the fact that some of America’s biggest corporations are giving hundreds of thousands and even millions of dollars to this organization and others whose misleading names conceal a more expansive and dangerous agenda.
Groups like Antifa and the BLM organization want to impose an ideology on America that would only bring greater poverty, a loss of freedom, destruction to churches and civil society, and violent law enforcement tactics to enforce compliance.
We’ve seen leftist protesters physically and verbally attacking police officers, an entire neighborhood turned into a violent “autonomous zone” with spineless politicians telling the police to stand down and let anarchists rule over innocent residents.
We’ve seen violent mobs defacing and toppling statues of historical figures such as soldiers and abolitionists. We must stop the violence and destruction and bring those committing criminal acts to justice while protecting the rights of good people to protest peacefully.
We must support our police officers who risk their lives every day to protect us no matter our color, religion, sex or nationality—while also making needed reforms like removing police unions to weed out bad cops and end unacceptable policing procedures.
Calls to defund the police are calls for chaos, and calls to disarm them are lunacy. We’ve seen what happens in Seattle, Minneapolis and other cities when criminals are allowed free rein.
Their Marxist agenda has wrought destruction on nations for generations. It expands government control and takes every opportunity to limit freedom—and it must not take root in the United States.
The most desperate communities in America have been run by the liberal left for a generation or more. We’ve seen what that leadership has brought: generational poverty, fatherless families, worse educational outcomes, more disparity and higher crime rates. Lurching even further left would be even more disastrous. Instead, we must implement conservative policies to ensure America’s promise of liberty and opportunity is a promise for all Americans. America is a land of promise, and conservative policies can make those promises ring true for all Americans.