John “Pay Attention to Me” Kasich to Speak at Dem Convention

John “Pay Attention to Me” Kasich to Speak at Dem Convention

“I’m so excited I can’t wait for John Kasich to speak — Words said by No one in the history of man.” 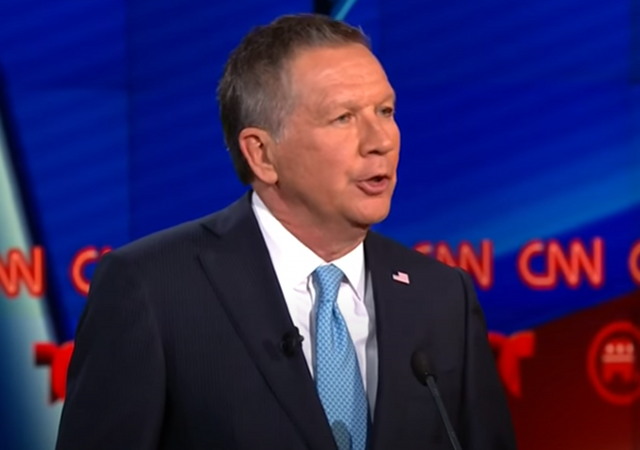 Anyone who remembers the 2016 Republican primary knows that former Ohio Governor John Kasich loves nothing more than the sound of his own voice.

So it should come as no surprise that he is ditching his allegiance to the Republicans in order to speak at the Democratic National Convention in support of Joe Biden.

Do you think he’ll mention that his father was a mailman?

John Kasich, the Republican ex-governor of Ohio turned critic of President Donald Trump, is expected to speak at the Democratic National Convention next month in support of Joe Biden, according to the Associated Press.

It’s a move that would be unthinkable just a few years ago, when, as governor, Kasich clashed with Democrats on a range of issues, from abortion to collective bargaining for public employees.

Kasich is one of a number of high-profile Republicans who intend to work against Trump’s re-election in the closing days of the campaign, according to the AP.

Kasich is one of those establishment Republicans who can’t take no for an answer when GOP voters reject them. Think of former Florida Governor Charlie Crist.

It’s worth noting that a strategist for Kasich’s 2016 campaign was John Weaver, who co-founded the anti-Trump ‘Lincoln Project.’

Ben Shapiro appeared on the Laura Ingraham show on Monday night to discuss Kasich’s decision to speak at the DNC and his connection to the Lincoln Project.

Ben Shapiro rips Kasich over reports he will speak at DNC: ‘Did he ever stop running for president?’

The AP reported that, according to a person with direct knowledge of the plans, the former 2016 Republican presidential candidate is among a handful of high-profile GOP members likely to become more active in supporting Biden in the fall.

“Did he ever stop running for president? Did he officially drop out in 2016 or is he still actually running?” asked Shapiro.

The commentator joked that Kasich has likely been a regular guest of honor at “rubber chicken dinners” where he gives speeches “no one listens to.”

He also asked where Kasich’s political niche would actually be in the DNC:

“My goodness, where is the groundswell in Democratic Party circles — like oh my God, John Kasich is coming — I’m so excited I can’t wait for John Kasich to speak — Words said by No one in the history of man.”

You can watch the segment below:

Last word goes to this guy:

Democrats, you can have John Kasich. We didn’t want him anymore anyway.

He is a man without allegiance. He’s not radical enough for the left and not honorable for the right.

So because you are lukewarm—neither hot nor cold—I will vomit you out of My mouth!

Who ? and why would anyone care.