“Conservatism as a philosophy and ideology … is and always has been hostile to the aspirations of Africans in America, incompatible with the struggle for freedom and equality” 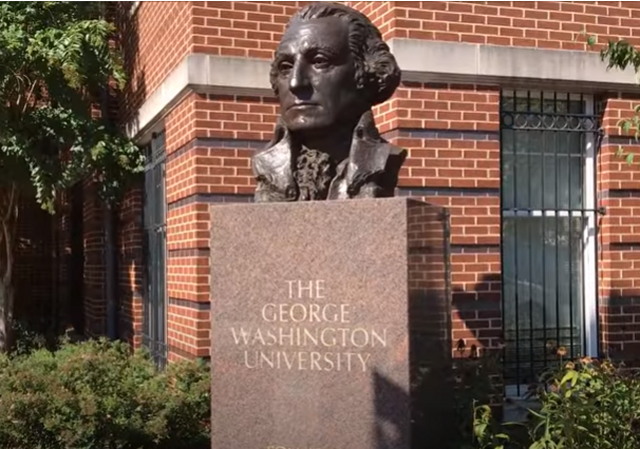 At George Washington University, the school Diversity Office put out a syllabus of recommended reading, which includes a book that equates conservatism with racism.

They probably thought this was of no consequence, because that’s something many progressives believe.

George Washington University is urging students to read Conservatism and Racism, and Why in America They Are the Same in an effort to educate them about the dangers of stereotypes and discrimination.

The “Solidarity Resource Syllabus” released by the Washington, D.C.-based school’s Office of Diversity provides students with a reading list that focuses on racism in the United States. Among the 126 books that the university says “actively and effectively … [combat] injustice” is San Francisco State University professor Robert Smith’s 2010 book that equates conservative beliefs with bigotry. That label applies to all who subscribe to right-leaning beliefs, including people of color.

“Conservatism as a philosophy and ideology … is and always has been hostile to the aspirations of Africans in America, incompatible with the struggle for freedom and equality,” the book reads. “Repeatedly I was asked, ‘Are you saying that conservatism is racism, that all conservatives are racist?’ Aren’t there black conservatives? Are they racist?’…. My answer to most of these questions was a qualified yes.”

The report includes a response from the College Republicans:

“The GW College Republicans are disappointed that our university, which has been committed to academic freedom, would include works in their syllabus that falsely equate conservatism and racism,” Burland said.

But silly GW forgot that their Office of Diversity posted this to their website.

48 hours later and no response from the university pic.twitter.com/7YfFbK5qAo

Greg Piper of The College Fix notes that tuition at GWU is $60K per year:

An elite university that charges students nearly $60,000 a year in tuition is urging them to read a book that conflates racism and conservatism.

George Washington University pulled the syllabus that includes the book – Conservatism and Racism, and Why in America They Are the Same – shortly after the Washington Free Beacon asked about it Wednesday, according to reporter Chrissy Clark.

The Office of Diversity and Inclusion published the “Solidarity Resource Syllabus” to recommend more than 100 books to students on the subject of racism in America. The 2010 book by Robert Smith, professor of political science at San Francisco State University, claims that even blacks who subscribe to conservative beliefs are racist:

“Repeatedly I was asked, ‘Are you saying that conservatism is racism, that all conservatives are racist?’ Aren’t there black conservatives? Are they racist?’…. My answer to most of these questions was a qualified yes.”

Make no mistake, this is one of the reasons Democrats want to make college free. College campuses plant the seeds of radicalism that drive young people into the progressive movement.

When you have no history anything your told becomes the truth.

Steel bars over the windows to keep those rapacious conservatives at bay.

IRS needs to trace the cash flow from the street punks upstream to through the distribution system. Hell, they could put a bounty on it and let O’keefe make a windfall!

Does it mention the slavers and Jim Crow were Democrats?

we, the colored people, newly emancipated and rejoicing in our blood-bought freedom, near the close of the first century in the life of this Republic

America’s original sin, was actually America’s original compromise (i.e. go along to get along) that was declared then mitigated through extreme action. Diversity (i.e. color judgments), not limited to racism, is a progressive condition, and people should be wary of its progress.

Humanities departments in universities are dead. What’s the point? You can read any book of any genre from any period of history by ordering books online and patronizing local libraries. You can get as many people together as you like to discuss and learn from each other’s insights. Why would anyone pay a dime to have an alleged scholar of dubious distinction craft a list of writings of often dubious quality in order to be credentialed as “educated?” The Left is hanging on desperately to higher ed as one of its strongest bastions and continues to be subsidized by bloated tuition and tax money. Starve these useless institutions.

But how else will they brain wash those under 21 minors?

I had a great course in Shakespeare with an excellent and helpful instructor. But I suppose I could now find such a study online.

I mourn for the decent teachers who will be out of jobs because of the other kind.