Germany’s Der Spiegel: Trump uses speech to “stress the superiority of his country.” 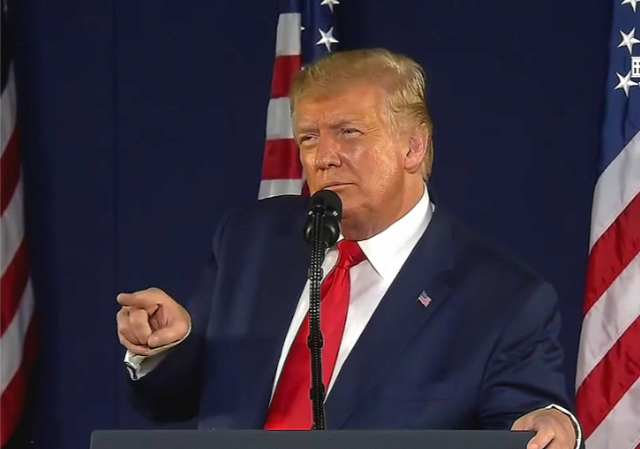 European mainstream media were united in their condemnation of U.S. President Donald Trump’s Fourth of July speech at Mount Rushmore. The coverage in the mainstream German, French, and British news outlets echoed each other, describing the speech as ‘dark,’ ‘polarizing,’ and ‘divisive.’

Liberal European commentators wrote glowingly about the protest movement led by the far-left Antifa and Black Lives Matter and accused the U.S. president of ‘enflaming’ the situation with his ‘fiery’ rhetoric. “Trump used Independence Day speech to divide the nation,” claimed the headline in Germany’s most-read newspaper Die Welt.

Accusing the U.S. president of having “no sense of tradition,” the German newspaper commented:

…Trump, a disruptive president, never had any regard for tradition, let alone non-partisanship. With the November 3 presidential election coming ever closer and his poll number droppinh further, he sticks steadfast to his “Trump First” campaign.

The speech on this July 4th was another sad high point. Instead of uniting the country, Trump is sowing division. Instead of promoting consensus on the Independence Day, he is widening the political divides. (Translated by the author)

“America in middle of a Culture War (“Kulturkampf”). It was a bleak scenario that President Donald Trump painted at the foot of Mount Rushmore,” the state-run broadcaster commented.

German newspaper Die Süddeutsche Zeitung reported the speech with the headline: “Trump’s divisive words on national holiday.” Decrying his rhetoric as partisan, the newspaper wrote: “These are not the words which other presidents usually utter on a traditionally unpolitical national day.”

“President used the speech to deliver a sweeping blow to his enemies,” was the verdict of the German weekly Die Zeit. Trump “used the Independence Day speech for usual dark and polarizing message,” the magazine added.

Trump used the ceremony to “stress the superiority of his country,” German weekly Der Spiegel complained. “Donald Trump makes a speech that further divides the ‘the most magnificent country in the history of the world’,” the magazine ironically added.

Notwithstanding the coronavirus crisis, and the nationwide protests against racism and police violence, [Trump] described the U.S. as the “the most magnificent country in the history of the world.” Trump delivered an explosive payload of polarizing message to this supporters: according to him a “merciless campaign to erase history” is underway.

Trump’s accusations against the participants of the [BLM] protests are not new: at Mount Rushmore they were particularly harsh. (Der Spiegel, July 5; Translated by the author)

German state broadcaster Deutsche Welle was upbeat about the election prospects of the presumptive Democratic challenger, Joe Biden. “One thing, however, is clear: 2020 is not 2016,” the broadcaster claimed on Saturday. “Trump’s opponent isn’t Hillary Clinton but Joe Biden, and a broad swath of the US electorate finds him much more appealing than Clinton, whom many despised.”

“US president enflames national tensions with attack on ‘leftwing revolution’,” leftist British newspaper The Guardian complained. Trump “offered little by way of reconciliation” and “has shown no sign of embracing the public mood,” the newspaper remarked, referring to the Black Live Matters movement.

“The US president defended the symbolism of statues and monuments before a packed crowd at an event that revelled in political incorrectness calculated to enflame the country’s current divisions and enrage liberal critics,” The Guardian further added.

The UK daily Independent called it “a dark and divisive Independence Day speech.” The U.S. President invoked “his dark vision of an America under siege” and “heightened his law-and-order threats against Americans demonstrating against racial injustice,” the paper concluded.

“Donald Trump’s sermon by the mount fires up only a faithful few,” The Sunday Times concluded. The speech was “a defiant and jingoistic Independence Day oration” in which Trump “declared his own grand civilisational struggle: a culture war against the American left.”

Liberal commentators across Europe are pinning all their hopes on the poll numbers, praying for a Biden victory in the 2020 election. Having watched their dreams of a congressional impeachment dashed, they are desperate for a change in the White House. The prospect of four more years of a Trump presidency is an unbearable one for Europe’s ruling political and chattering class. Germany’s state-owned  Deutsche Welle summed up this desperation in 2018 when its asked: “How much more Trump must we endure?”

He only stressed the superiority of our country because it IS superior in many, many ways. Next question.

In terms that the Deutsche dummkopfs can understand “Leck mich am arse”. And for the Frenchies “bite me”.

These guys have been free riding on us for 75 years now–time for them to carry their own water.

1
notamemberofanyorganizedpolicital in reply to Comanche Voter. | July 6, 2020 at 1:17 am

They must be severely inbred like Barrack doing Joe
in this ad.

Well yes, we are superior. At least until the Democrats get their way.

Send this bombshell to those Nazi EU nuts.

When the Media and Dem have lost the trans…..

If the Euro-leftists didn’t like the speech, Trump must have been saying the right things. I can say after watching and listening to it, it was one of the best speeches I’ve ever heard delivered by a POTUS in my lifetime.
America, Love it or leave it!