Barr: “Well, this is a hearing. I thought I was the one who was supposed to be heard.” 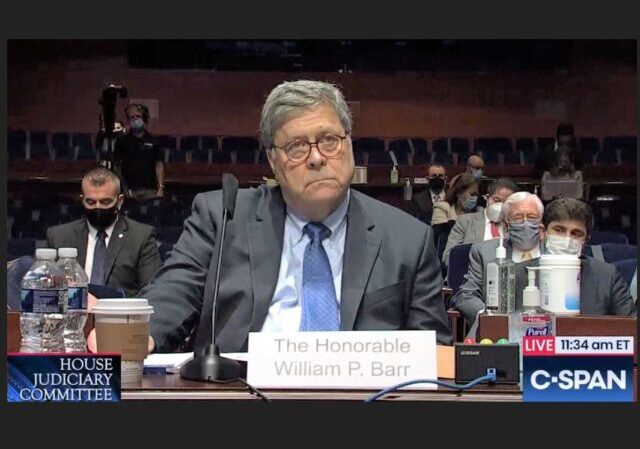 AG Bill Barr testified in front of the House Judiciary Committee this morning. For exactly what I do not know because it didn’t take long for it to go off the rails.

In other words, right away:

Once the hearing, which lasted until mid-afternoon, [Chairman Jerry] Nadler did not hesitate to express his scorn for Barr and his Justice Department.

“Thank you for being here, Mr. Barr,” Nadler said with a note of sarcasm, pointing out that this was the attorney general’s first time appearing before the committee.

Nadler brought up the death of George Floyd, the protests, the collusion investigation, prosecutions against those involved in the investigation, re-elections, etc.

Like I said. Who knows the actual point of the hearing except to try to embarrass Barr on TV.

Ranking Member Jim Jordan fired back with a video of those peaceful protesters Nadler called a myth:

@Jim_Jordan opening statement at the House Judiciary Committee hearing chaired by Jerry Nadler is a must watch.

The devastating video of Portland violent mob is a stark contrast to Nadler’s “that is a myth” comment. #NadlerPortlandMyth

Nadler’s reaction? He hopes that Jordan never complains about the length of his opening statements.

The Democrats could not stop interrupting Barr. They asked him stupid questions.

AG Barr after being interrupted again:

“Well, this is a hearing. I thought I was the one who was supposed to be heard.” pic.twitter.com/MJP4EZ853N

AG Barr to @RepJoeNeguse after he interrupts him:

“You said under penalty of perjury, I’m gonna answer the damn question.” pic.twitter.com/UUfN7wXoLY

BARR: “Are you surprised that I’m a Republican?” pic.twitter.com/q3yJXY9fDN

SCANLON: “In fact you have no evidence that foreign countries can successfully sway our elections with counterfeit ballots.”

BARR: “No I don’t but I have common sense.” pic.twitter.com/38xTm59LnV

On the night St. John’s Church was set on fire:

RASKIN: Are you aware that church leaders “all denounced this police assault on the civil rights and civil liberties of the people?”

BARR: “Did they do that before or after the fire was put out?” pic.twitter.com/Aw5oE3cc2a

“Since when is it okay to try and burn down a federal court?”pic.twitter.com/0MLPD9EYU0

Barr with the mic drop:

Remember. The fact that they ALL DID IT, tells you that it was preplanned and coordinated.

THEY ACTUALLY THOUGHT IT WOULD MAKE THEM LOOK GOOD.

That’s the stupidity of the House Democrats that the RINOs keep losing to.

Uh, read the Constitution, which establishes three (3) CO-EQUAL branches of the federal government and a mechanism of checks and balances. I thought American children had to pass a Constitution test to graduate elementary school and begin high school, but after reading the the comments about this Constitutional hearing of this anti-Constitution Attorney General, I wonder how so many people escaped from Wonderland en masse. Anybody know if Alice intends to vote for the P*()y Grabber In Chief in November?

For the sake of the Republic, most of us who aren’t rich, hereditary aristocrats hope that REAL Republiconartist, Mitch McConartist is able to retire to a turtle sanctuary thousands of miles from the U.S. mainland–excluding the Hawaiian Islands. Or Moscow, his choice.

What a hearing! Not enough independent, jaw-dropping, and right-in-the-middle-of-things-based testimony to set the record of violence, and the myth-busting, active, repeated participation and instigation by Antifa at Portland’s US Courthouse completely straight, once and for all vis-a-vis these rabidly hot-for-multi-trillion-dollar-climate-change-legislation, the Dem-Left-Globee namby-pamby members of the notoriously Freislerische, Jabba-the-Hutt-and-Waddler-chaired House Judiciary Committee.

If only the late, great Doctor of Gonzo Journalism himself — carrying (with more film than he could possible need) his famous Canon 35-mm around his neck and earing sunlight-diminishing aviators on his nose and ears, but sans his customarily toted six-pack and signature dentally gripped, device-holding, unlit coffin nail (yielding, albeit grudgingly, to congressional decorum) — were to have been summoned by the Committee to pull up a chair alongside the AG and provide his sworn, complementary testimony re his immersed experience with the Mob at the same courthouse in Portland, for 7 straight evenings.

For this man of unquenchable learning and excitement — and concomitantly always seriously considered the right chemical intoxicant(s) by which to lower the world-events-inducing, toxically concentrated slush of his own stress-causing, work-distracting biochemicals, but with results, such as always meeting his editor’s deadline; and one known as nothing less than a comic extraordinaire by his own extraordinary peers* — such an undercover gig wouldn’t have been as challenging, demanding, risky, and downright life-threatening as the same kind of work he did in the mid-60s, riding cross-country with those none less menacing than the infamous and almost evil, Hell’s Angels themselves, the worst of the patriotic American bad bikers.
________________________
* “Author Tom Wolfe has called [Hunter S] Thompson the greatest American comic writer of the 20th century. https://en.wikipedia.org/wiki/Hunter_S._Thompson

There was only one real question that was asked and it was asked near the end. They asked if Barr would State under oath that he would commit to not releasing the Durham report before the election, Barr said no.
This is why the Dems are going after him. They don’t want the Durham report to get any of their Dems in trouble.
Fear. It’s fear.

It’s Republiconartists’ fear that their Fearless (and Brainless) Leader, The Lyin’ King, has finally laid bare the 80+ year plutocratic agenda. That politically corrupt scheme has created a wealthy hereditary aristocracy by rigging an unfair, regressive income tax system and encouraged a tiny number of incredibly rich plutocrats to widen the wealth gap year after year for decades by shipping good paying middle-class jobs and factories off shore. The Grifter In Chief, puppet President of the U.S.A. for his master, that great humanitarian and former KGB assassin Vlad Putin, has made America Raped Again, just like Republiconartists of the 1920s did. How many patriots will wake up and find that they’d rather be Americans in the tradition of those hair-on-fire radicals like Franklin, Jefferson, Revere, Hale, Adams and so on, rather than plantation workers for the likes of the Koch brothers (there’s still one) and Mitch McConartist.

By letting hillary clinton skate free, and failing to indict a single corrupt democrat (omar, cortez, etc.) including obama, Barr put himself – and us – in a situation where half the nation believes the bullshit coming out of the mouths of the likes of pelosi and nadler.

Republiconartists present a much greater target-rich environment for law enforcement officials. Based on over eighty years of demonstrable evidence, the Republiconartist Party government officials have engaged in Racketeer and Corrupt Influences Organizational activities that patently violate their oaths of office to protect and defend the Constitution and all Americans.

Would 39 separate individuals seeking to unmask the identity of Flynn between Trump’s election and the end of January be a “normal number?” Jordan asked. “Historically, that seems to be a high number,” Barr noted, adding “the other question you have to ask is why was this after the election.”

Jordan continued by noting that of those 39 Obama officials, seven people at the Treasury Department unmasked Flynn’s name. Is this an issue Durham is looking into, the ranking member asked, referring to Connecticut U.S. Attorney John Durham, whom Barr has tasked with investigating the targeting of the Trump campaign.

“I asked another U.S. attorney to look into the issue of unmasking because of the high number of unmaskings and some that do not readily appear to have been in the line of normal business,” Barr replied, identifying Texas-based U.S. Attorney John Bash as leading that probe.

But when Jordan asked for clarification that Bash was investigating the unmasking requests during the presidential transition period, Barr responded that the Texas U.S. attorney’s investigation was “actually” focused on “a much longer period of time.”

The simplest answer to Barr’s question-in-response is that it’s always in season to investigate treason.